Petit-gris snail shell at back left with gros-gris shell next to it. The others are Roman snail shells.

Grégory Roy is a snail farmer (Fr. héliciculteur). His business, called L'Escargolette, is fully vertically integrated, as modern farmers like to say. That is, he controls the whole process from breeding and raising the snails to preparing them, marketing and selling them. The farm, near Ligueil, covers 300 m² (that's the size of our vegetable garden) and he has 80 000 head. He uses the words tête (head) and bêtes (beasts) just as any anglo grazier would.


Grég with a tray of snails in croustilles (edible shells made from flour paste baked in a special snail shell shaped mould). 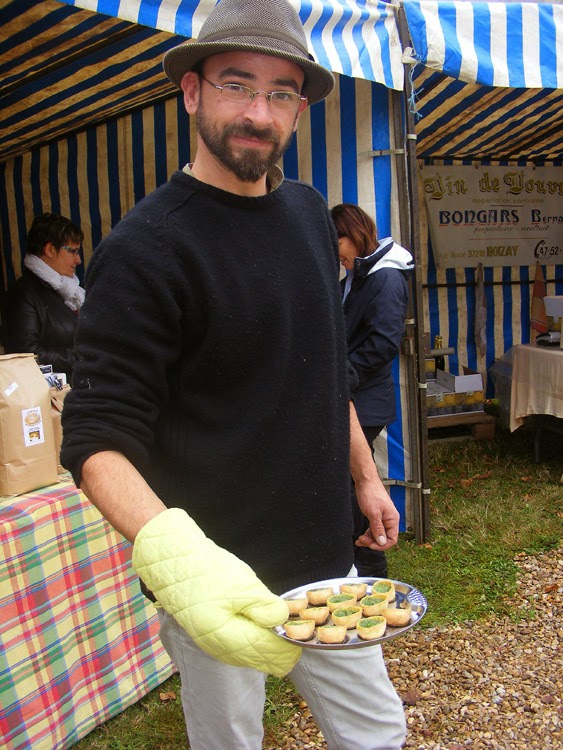 He has a nursery (he uses the English word) where he raises baby snails called naissains in French. They are tiny to begin with, only a few millimetres across and weighing half a gram. They are also delicate and very susceptible to overheating. He has to make sure to open up their greenhouse to ventilate it early in the morning before the sun hits it, or they cook and his whole next generation of stock is killed. He raises native petit-gris and gros-gris snails (Garden Snails) rather than the more usual escargots de Bourgogne (Roman Snails). The much larger Roman Snails make up 80% of the industry, but he prefers the flavour and texture of the smaller Garden Snails. The smaller snails also have the advantage that they are quicker to mature to consumable size. Garden Snails take about 4-6 years, whereas Roman Snails take 7 years. Customers can buy naissains or live fully grown snails if they have a yen to be a bit more hands on.


Toastines d'escargots on the left, escargots au court bouillon on the right. 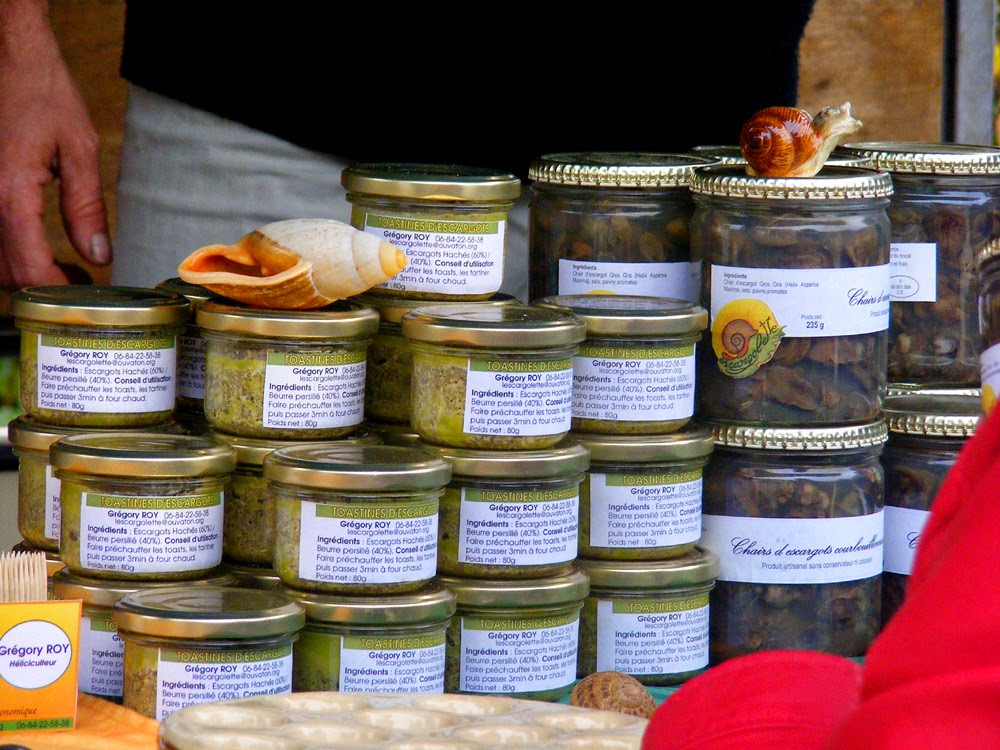 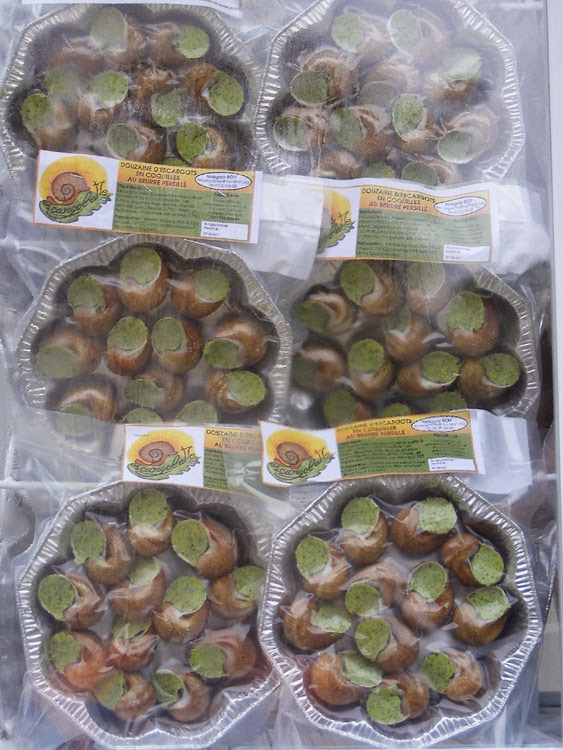 Grég didn't leave school with a burning ambition to become a snail farmer. He qualified as a plumber specialising in heating systems, but after a time wanted to get involved in agriculture as a sideline just because he was interested. He met a snail farmer, and initially he thought the idea of snail farming was a joke, but he slowly got more and more intrigued by the creatures themselves. He likes the problem solving aspect of snail farming. For example, snails have numerous predators, particularly birds and certain carnivorous mammals. Dealing with the birds was easy -- he just erected nets. But what to do about small mammals? His solution is ingenious to say the least. The farm has a perimeter track, which is patrolled by guinea pigs. The scent of these tame and strictly vegetarian rodents keeps away shrews and hedgehogs.

The snails get to eat about 30 different vegetable, forage and grass species, all grown on site without pesticides. In the mix are plants like Jerusalem artichoke, agricultural rape, clover, lucerne, rye and sunflower, to which Grég adds a supplement of powdered legumes. It's important to him to follow the traditional methods of raising snails, respect the soil, find locally sustainable ways of working and focus on the quality of the lifestyle and the product.

If you want to try snails, but are a bit hesitant, I suggest trying the toastine. It's a very tasty buttery garlicky parsley flavoured spread on a bit of crunchy toast. And if anyone can convince you to try some it's Grég. He's like many of these young men I see around here who are living and working their dream -- totally dedicated to making a success of his business, producing the best snails he can, educating the public about the product and spreading the word about how delicious they are. If you go to the farmers markets in the Touraine du Sud you will quite likely encounter Grég and his snails. I would have linked to his website, but he claims to be a paysan (peasant) living in the middle of nowhere, so he doesn't have good internet connection and doesn't use email or a website. These photos were taken at the annual autumn market held in the farmyard of Maison Perrin, a foie gras and fat duck producer whose farm is located between la Celle Guenand and le Grand Pressigny.

I first met Grég several years ago at an informal meeting of organic producers which we blogged about at the time.

Muesli, a simple matter of combining two packets of mixed rolled cereals (wheat, oats, barley and rye), a packet of sultanas, one of sunflower seeds and a cup of linseeds. Two cups of unbleached almonds were toasted and added, and a packet of the leatheriest dried apricots I could find, cutting each apricot into three. No added sugar or fat. No spices or chocolate.

Custard, made by heating a pint of milk containing a split vanilla pod and letting it infuse. Vanilla needs heat and time to give its flavour up. Meanwhile, four egg yolks are combined with three tablespoons of sugar and a teaspoon of cornstarch (cornflour). Reheat the milk to near boiling and pour it into the egg mixture, stirring all the while. Put back on the heat and stir until thickened, being careful not to let it boil. Strain into a jug to get rid of any stray bits of milk skin and coagulated egg white. If you use vanilla extract you can just chuck everything in together and heat from cold, stirring all the time. Last night's custard was served with stewed cherry plums from the freezer.
Posted by Susan at 09:00

Walt and I enjoy snails and especially the butter, garlic, and parsley mixture they are often cooked in. The snails themselves don't seem to have much taste, and the texture is pleasant, not rubbery, if they are well cooked. It's kind of the same with chicken or duck gizzards, which are tender and actually tasty if they are slow-cooked for a long time. I think the reason people ate snails was that they were permitted on meatless Fridays, being cold-blooded like fish. They're easier to catch than fish are! But they do have to be purged if you catch them in the wild because they consume plants that can be toxic to humans. Thanks for the nice post, Susan.

All what Ken said...

Ken: Thanks for the additional info.

Interestingly the owners of the snail farm we visit near Le Touquet say that the majority of snails eaten in France come from Poland. I'm not a fan of snails no matter how they are 'dressed', but would always taste some snail pate when we went on our school visit.

The curried goat sounds so much more appealing!

Gaynor: An interesting additional snippet of info, thanks.

I enjoy eating escargots, but never thought about the farmers who raise them.
That was a fascinating profile of Mr. Roy that you wrote.
Thanks!

Dean: Grég's an entertaining guy -- a real spokesperson for snail farmers I think.

He almost makes snails sound edible. I'll have to try the toastine. I have actually eaten and enjoyed snails in the restaurant at Chambon, so I could turn out to be a snail lover. Oysters however...

M. Roy sounds wonderful and looks very enthusiastic....
BUT...
there is no way I could dream of eating snails...
despite what Ken says...
and given his knowledge of food, I believe him...
and you...
so, think of it this way...
you can eat my snails next time you see him.

However, I think his way of farming seems top of the bill... and to think of the Guinea pig patrol makes me smile inside...
my brother used to have one called Fred...
and it was a very charming and entertaining creature...
all strength to his snails...
and him!

PG: I'll eat snails and enjoy them when on the menu, but wouldn't order them specially I must admit.

Tim: I liked the guinea pig story too. Hilarious really.