Anyone who has driven into Preuilly from the Loches direction or who reads our friend Gaynor's blog will have noticed that there is a humungeous Yellow-legged Asian Hornet Vespa velutina nigrithorax (Fr. le Frelon asiatique à pattes jaunes) nest in a tree close to the road just as you enter Preuilly. The nest is clearly very active (you can see hornets crawling all over it), and since this species is an invasive alien, you are obliged to report nests to the authorities. 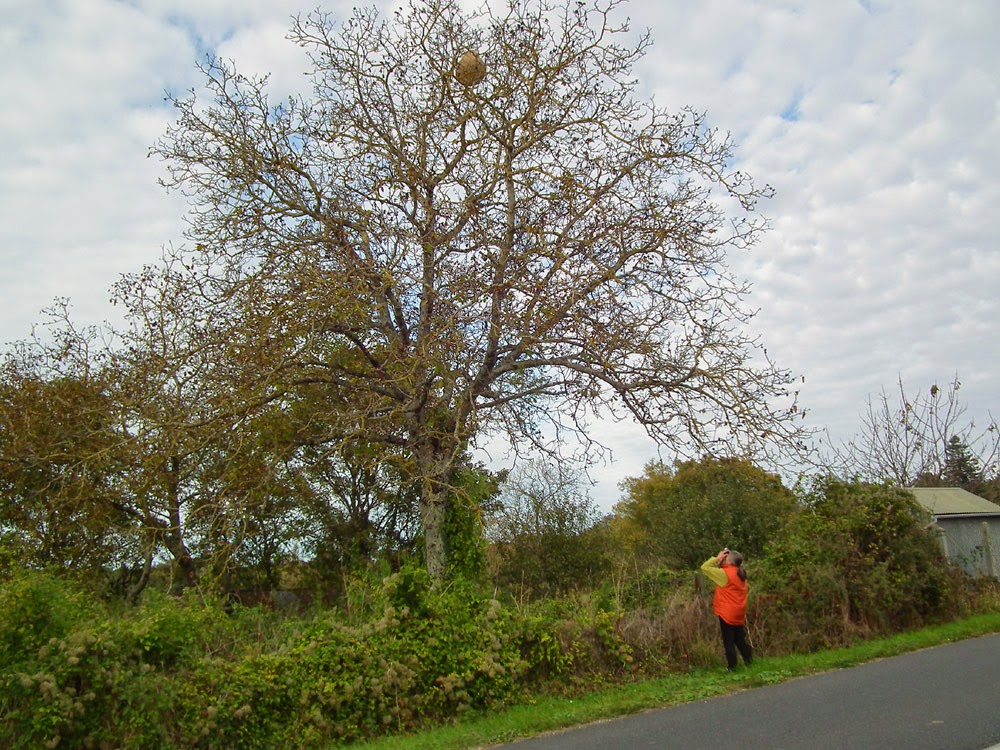 I figured someone would already have done so, but I emailed the mairie (town hall) anyway. I wanted to know how long it would take them to respond and what they would do (ie how seriously they would treat it). 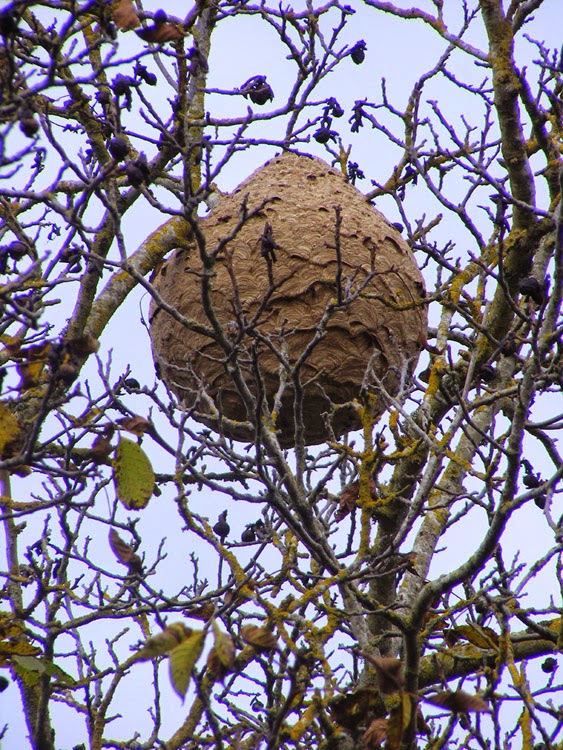 A couple of days later our friend Dominique Robin, who is on the council, emailed me to say that the mairie already knew about the nest, the landowner had been tracked down and notified that it is his responsibility to deal with the nest. 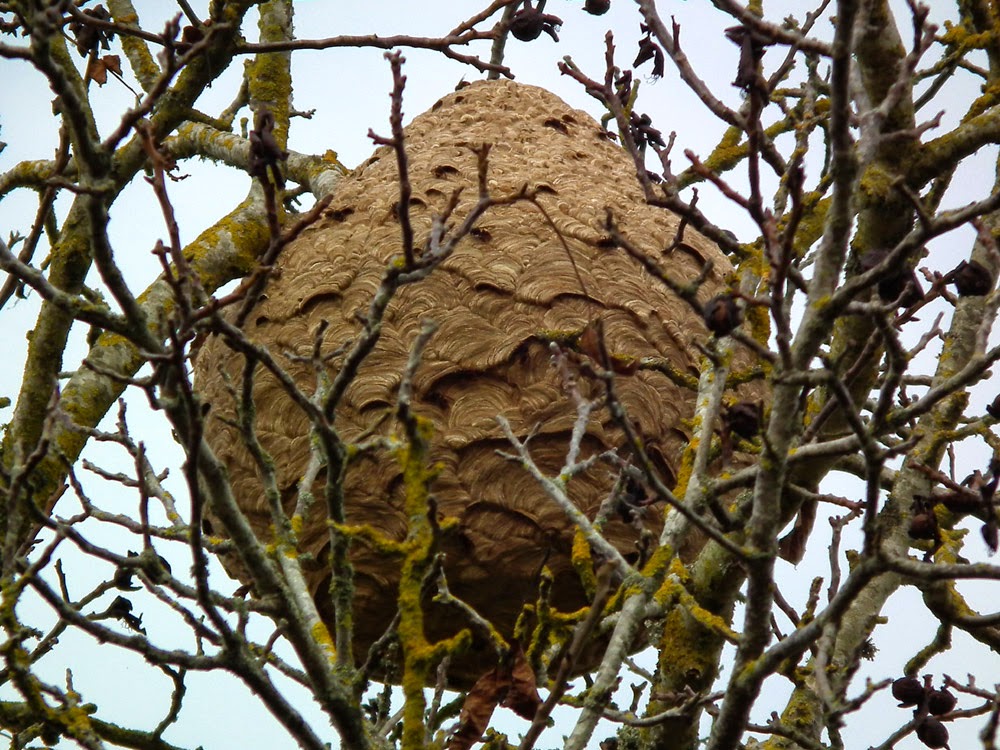 So now it's a matter of waiting to see how quickly the landowner takes to get the nest treated and removed. What I am slightly worried about is that he will attempt a 'home treatment' rather than one of the approved professional pest controllers.  Hopefully it will be treated at dusk or early morning before the hornets have left home for a day of foraging, and the treated nest will be cut down and burned so there is no chance for birds to eat the poisoned grubs inside the nest. 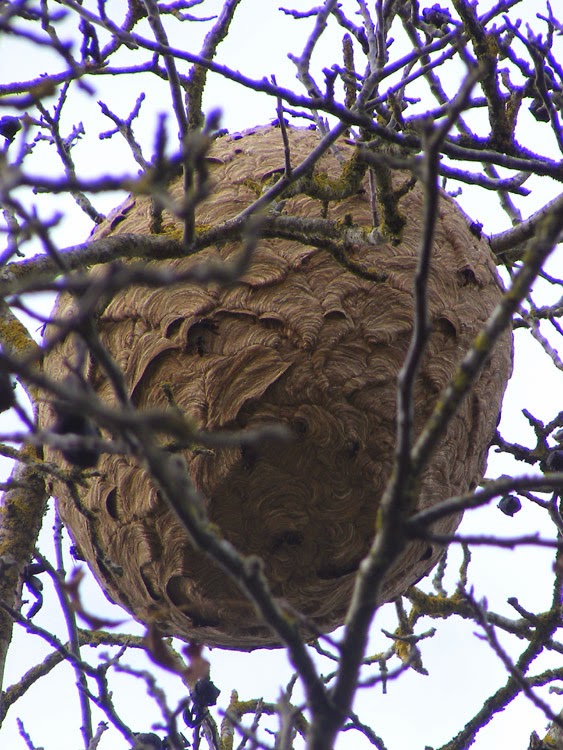 The nest will have been there all summer, but has only just become visible because the leaves have dropped from the tree. This is typical of how Asian Hornet nests are discovered. They are amazingly difficult to see until autumn.

By the time we had finished taking photos dusk was falling on a late October day. 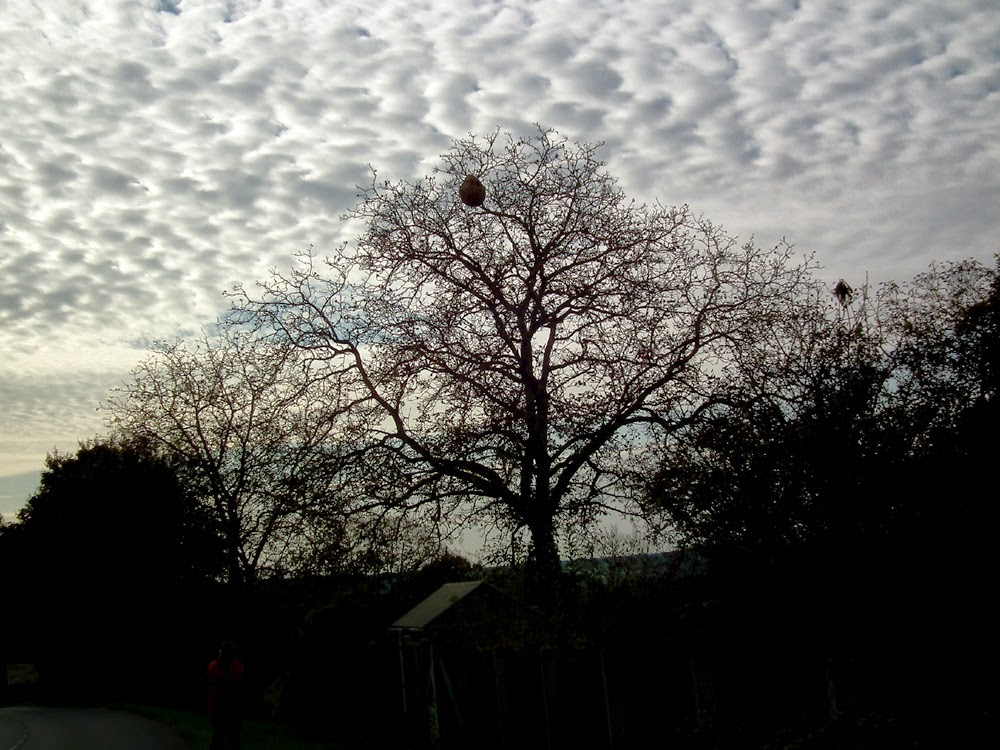 A week later, this hornet and some of her mates were encountered feeding on ivy flowers. The nest is in a tree just the other side of a small valley to the ivy, so this hornet almost certainly came from there. 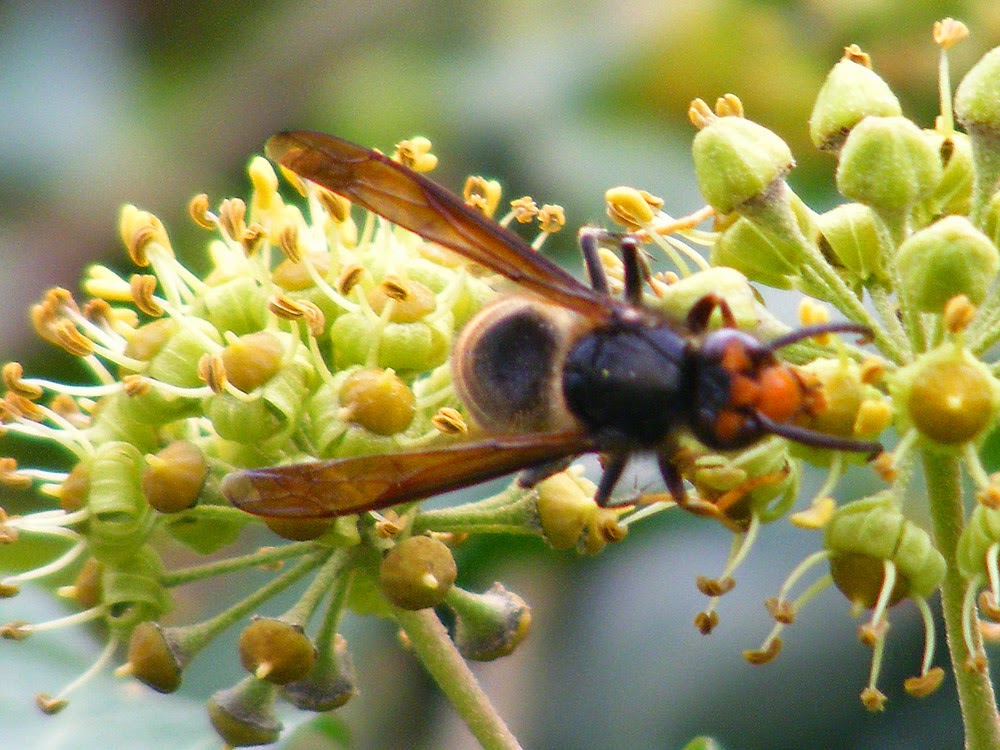 As of yesterday the nest is still there.

Update 27 November 2014: The nest features in an article in the local paper. Here's my translation:

Strange spheres have appeared in the trees and hedges of our region, posing some problems for the locals. Such is the case with a nest of Asian Hornets perched in the branches of a tree as you enter Preuilly sur Claise.

The destruction of these nuisances used to come under the responsibilities of the fire brigade. The current legislation envisages that these days the intervention is left to private companies and the fees are the responsibility of the land owner. The Asian Hornet is dangerous to man because of its sting, but is also one of the principle predators of honey bees. The disappearance of bees is a particularly worrying phenomenon. Not only is the apiculture sector significantly reducing, but bees are the principle pollinators of crops and wild flowers.  Without these precious insects a large part of the vegetation would no longer exist. Einstein said that if the bees disappear the human race would last no longer than four years. [This is utter rubbish, both in terms of attribution of the quote and the actual facts.] According to beekeepers the principle causes of their disappearance is sickness (brought by varroa mites and foulbrood), pesticides, monocultures and for some years now, the infamous Asian Hornet.

With this fourth factor, a problem arises when the land owners don't take up their responsibility, either through negligence or lack of resources. Many people are wondering whether the management of a plague of this magnitude should not be the responsibility of local or regional authorities, or even the national government.


For an alternative view on how much of a threat (or not...) they may be, Chris Luck has written an interesting blog post based on his recent experience of discovering an Asian Hornet's nest in his apiary. He's a beekeeper of many years standing as well as a very fine naturalist, who lives just the other side of the Brenne to us.

Email ThisBlogThis!Share to TwitterShare to FacebookShare to Pinterest
Labels: Insects, nature and wildlife, Pictures of Preuilly

As of February 2015...
the nest will still be there!!
ie: How well used did that little patch of land seem??
Looks pretty rank to me...

if it's like the ones here, winter would be the end of it anyway

Tim: Sadly I think you are probably right.

Melinda: Yes and no. The nest is still active. If it is correctly destroyed before the end of November you have a chance of killing off the next generation too.

A recent report on the French news said that a man died after being stung by this kind of Asian hornet a few days ago in the Vendée.

Ken: I didn't hear that but 4-5 people have been killed in France by Asian hornet stings since they arrived 9 years ago. The previous cases have all been slightly unusual, in that the nests have been very low and the person got very close. Some people are very sensitive to wasp venom. Fortunately these hornets are even less agressive than the European species, so attack is rare and death even rarer. They certainly don't attack humans on sight, but only if they are defending the nest. Of course, as they spread and their numbers increase, so will the attacks, simply because people come into contact with them. The possibility of attack is why using a professional is advised. In any case the person dealing with the nest should be wearing full protective gear. Unfortunately the professionals cost a couple of hundred euros, and many people don't see the necessity of paying this. You get idiots who think shooting the nest down would be a good idea for instance.

We got a queen on our ivy this week. She was so heavy she kept toppling over. After squads of photos, Tim very cautiously caught her in a honey pot (justice) and added a drop of ether. She is now in the fridge, honey pot and all. Ether is available at a pharmacy near you!

Ken: many thanks for that. The attack fits the other fatal ones that have occurred in France. The fatality figure the article gives I suspect is worldwide. It's certainly not just France.

The more I ponder on what you wrote above, I honestly think that the "leaving it to the landowner" to organise removal of the nest is the worst way of handling an invasion.

The Govt. should take responsibility and reward landowners for getting rid of them...
by the cost of a professional call out...
on production of a receipt, naturally...
or...
where the landowner is absent...
fine the landowner if nothing has been done within a month of being informed that they must take action...
BUT...
run the same reward system if they have had the nest destroyed...
and can produce a receipt...
and, as it is a growing Europe wide problem...
they could seek funding from the EU.

Running it that way should mean that people would be less inclined to DiY the job...
knowing that they'd get the money back.
Also, local councils could send out the details of specialists with the "get rid" letter...
and put the same info on their website... where they have one.

Might not get rid of them totally...
but it would severely set the spread back.

The current approach is "head in sand"!!

Tim: there is some hope that a native Conopid fly will parasitise them and keep the numbers down. Theoretically FDGDON37 is supposed to monitor and co-ordinate control, but it looks like they may just leave it to the mairie.

I hope this unfortunate incident motivates the landowner to take action: http://www.francetvinfo.fr/faits-divers/video-un-agriculteur-vendeen-meurt-pique-par-des-frelons-asiatiques_744253.html

Anton: yes, I hope it means the landowner employs a professional rather than attempting to remove it himself.

Yes, Susan...
I read about the fly...
either via this blog or in Connexions...
perhaps someone should be breeding them up in captivity and releasing them near nests??
Mind you... that would cost money...