Parmesan cheese smells of vomit. It actually does, and especially the ready-grated stuff. That's because the two things share some volatile chemicals that create aroma. However, even though smell and taste are inextricably linked, the human brain, a master of cognitive dissonance, is perfectly happy to focus on the delicious savoury umami taste and very few people dislike parmesan cheese. The British like it so much that the Italians can't believe how much they use -- more is consumed in Britain than in Italy. It's not the only cheese that has a pungent pong either, as anyone who has taken a Pont l'Eveque home in their suitcase after their holiday in Normandy will know (ahem...). Quite a few highly prized cheeses share volatiles with stinky feet. Whether you eat and enjoy them or not is a matter of exposure to them ie whether you are used to them or not.

About a fifth of people of northern European origin utterly loathe coriander leaf (known to you by its Spanish name cilantro if you are from the US). I remember being told years ago that the Vietnamese word for coriander was the same as their word for stink bug. I've been unable to verify that, but I have discovered that the word coriander itself comes from an ancient Greek word for stinking bug and that the ancient Greeks were very familiar with the herb (and, undoubtedly, stinking bugs...).


A Hawthorn Shield Bug Acanthosoma haemorrhoidale, an archetypal stink bug, ambling about in the Forest of Loches. 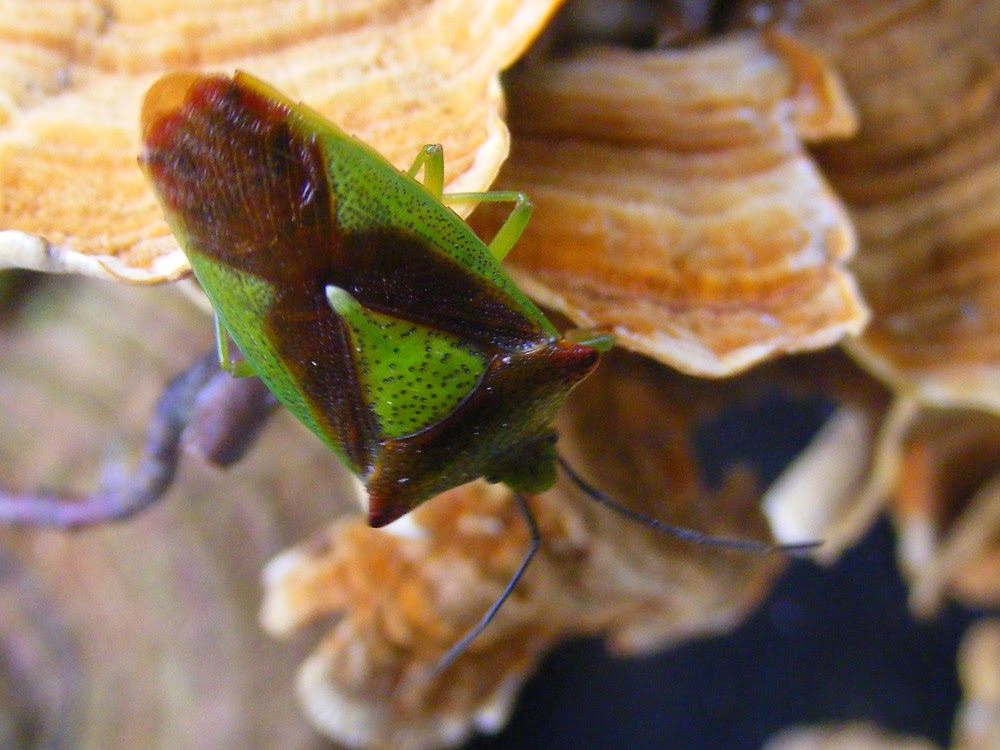 Many smells come from a group of volatile organic chemicals called aldehydes. Many people, like me, will describe the smell of coriander as like that of stink bugs. It turns out that coriander shares an aldehyde called trans Decenal 2 with stink bugs. It's an aroma that occurs naturally in foods as diverse as milk, tea and caviar as well as coriander, carrots and pork, and has been synthesised or extracted for use in the food and cosmetics industries. It is described as a fatty orange rose aldehydic floral green and the taste is fatty fried citrus.

Some people who think coriander smells like stink bugs loathe the stuff. Others, like me, love it. The difference is how our smell receptors respond to certain aldehydes. For some people, some stinky aldehydes seem to overwhelm everything else. Simon appears to be one of these people. For him, lavender smells of  stale sweat, not a mix of lovely astringent herbal scents. Likewise he hates rosemary, sage, cloves, cinnamon, saffron and nutmeg. Neither of us are keen on mint of any sort.

Simon is one of a small group of people who say that coriander tastes metallic. He has the same reaction to parsley. This group of people seem to be very sensitive to bitter tastes. Simon will taste the bitter elements in many green vegetables that I don't even notice, or perhaps enjoy. I like a good combination of bitter and sweet, such as good honey has or intense dark chocolate. Endive doesn't have much to recommend it though, it has to be said.


A packet of coriander from the supermarket.
Auchan in Chatellerault is one of the few places apart from the specialist Asian supermarket Paris Store in Tours Nord that  I can usually rely on getting coriander around here. Sometimes they even have big bunches. 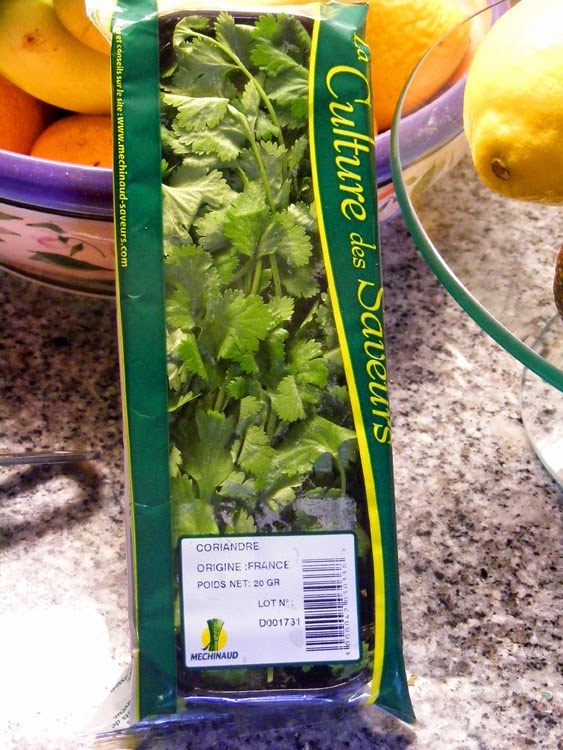 The French for stink bug is punaise (='stinker'). A French person will often tell you that punaises smell like stale almonds. Frankly, I don't know what stale almonds smell like, but presumably that cyanidey odour that too much almond essence gives you.

These sorts of very intense differences in perception of  taste and smell appear to be genetic, involving two genes linked to bitter taste and one to pungent flavours. Nearly half of Europeans have two copies of one of these genes, some have none. A significant number of these people report that coriander tastes soapy. Describing coriander as tasting soapy seems to be the 21st century version of describing them as smelling of stink bugs. I guess fewer people are exposed to stink bugs these days. As usual though, genetics isn't the whole story. Cultural background makes a huge difference, and for coriander lovers or haters this is possibly more significant. If you come from an Hispanic, Near Eastern or South-east Asian background you are much more likely than not to love coriander despite any genetic indicators. Like the cheeses, it's a matter of exposure.

Email ThisBlogThis!Share to TwitterShare to FacebookShare to Pinterest
Labels: Food and Drink, Insects, nature and wildlife