Making Hay While the Sun Shines

Last week our friend Tim came over to the orchard with Betsy, his multi-purpose machine that can be fitted with different sorts of heads for doing different heavy duty tasks in the garden. I wanted the scissor action cutting blade to mow the grass and wildflowers gone to seed down to about 3 inches.


Tim operating Betsy in our orchard. 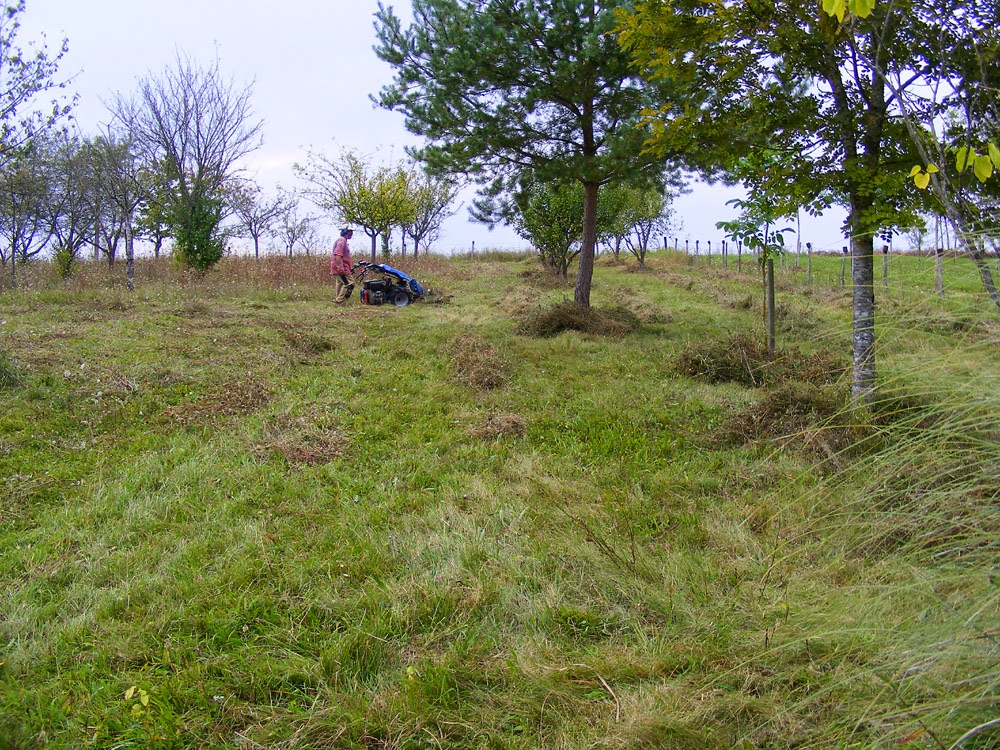 The advantage of using Betsy is that she can't be rushed. It's slower and harder work than whizzing around on a ride-on mower, but the cut is more biodiversity friendly. Wasp spiders, snakes, bushcrickets and grasshoppers, voles and frogs  have time to amble / slither / hop out of the way, praying mantis can be spotted and encouraged to move on, rather than everything turned into mincemeat. Betsy can cut through unwanted cherry seedlings and other woody plants that threaten to turn the orchard into scrub instead of wooded grassland. She doesn't mulch everything into short lengths that disappear into the sward and form a mat at ground level, but leaves it all long so it can be rolled into windrows and moved to where it is wanted (in this case under the trees to break down and feed them, but not on the open grassland, which needs to be kept low in fertility to suit the orchids and other wildflowers).

Tim operated Betsy whilst I followed with a hay rake bundling the clippings up into neat piles. We left one area unmowed to provide habitat for those creatures that prefer longer vegetation, such as the damselflies, wasp spiders, grasshoppers and bushcrickets and anything that will overwinter inside the stems of the more robust plants. The area to be left was chosen on the basis of my discovery of a flowering Autumn Ladys Tresses orchid Spiranthes spiralis, and we left an area about 10 m x 5 m around it. It will get mowed probably in February, depending on the weather.


Autumn Ladys Tresses flowering amongst the fruit trees in our orchard. 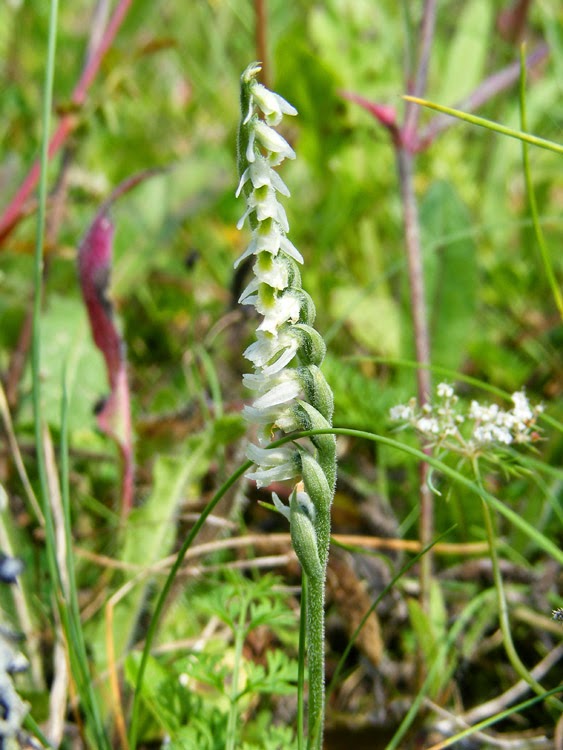 The big advantage of mowing at this time of year is that for a very brief period in early September the orchids (apart from the late flowerers such as the Autumn Ladys Tresses) are dormant, with no visible leaf rosettes to damage underfoot. The seeds from this year's flowers are mature and have mostly been dropped. The other vegetation is not too lush and therefore not to full of nutrients, nor too full of moisture to cut. Even if we left it where it fell it wouldn't cause too much increase in fertility of the grassland, but it is best to rake it up and deposit it where it can break down and feed the fruit trees a bit (and suppress the grass around them). Hopefully a win-win situation.

Over winter I will try to mattock out the most persistent of the cherry seedlings and maybe, as Tim suggested I do, move some of the other squirrel and jay sown tree seedlings (oak, hazel, ash, walnut) to the boundaries, where they can be planted close to form a hedge. This sort of disturbance has the added advantage of creating little bare patches that orchids and other wildflowers can establish themselves in. It's random, mimicking what might happen if the orchard was grazed over winter for example. In orchards that are managed using a flying flock of sheep or cattle, the beasts trample certain areas more than others, creating bare patches.

So far I have repaid Tim for his efforts in spiders and orchid seeds.

Susan, that area that's left isn't particularly rank...
I'd be able to bring that down once you've marked the orchid rosettes, using the short cutter bar on the Stihl Split-shaft...
the other eco-friendly machine in the armoury.

Simon, keep on truckin'...
thoughts are with you.

Simon, it will get better. It's amazing how the brain learns to accommodate differences between the vision in the two eyes. Just give it time.