A Detached Retina Part I

The more observant of you may have notice a number of things:

1. I haven't written a blog post for years.
2. We were at le Mans recently.
3. I have had a medical adventure.

We can't do much about item 1, it's GOG* syndrome. That is, Blogger has changed and I can't be bothered learning how it all works - my experience is that it just doesn't and I would rather not write than fume (I don't do silent fume - the whole street tends to know). Item 2 was exciting, but Susan has it covered, and item 3...

Well, that's where only I can tell what it was like.

On the Friday morning I commented to Susan that it was weird - I could see little black ants crawling on the bottom of the lens of my glasses when I was wearing them, but I couldn't find them when I took the glasses off and looked. I put that down to some excitement, some beer and some wine on Thursday evening and ignored it (these days I rarely drink, and although I am not a one pot screamer the after effects are far greater than they used to be). On Saturday morning my eyes were a bit hazy, but that may have been wine and beer on Friday evening (no excitement, it had rained all Friday - not exciting in a tent). Sometimes my eyes just take a while to focus properly

It wasn't until we had completed the lap of the circuit that I picked up my camera and put it to my left eye - the stronger of my eyes, and the one I use for aiming stuff. Blow me down but it was interesting... 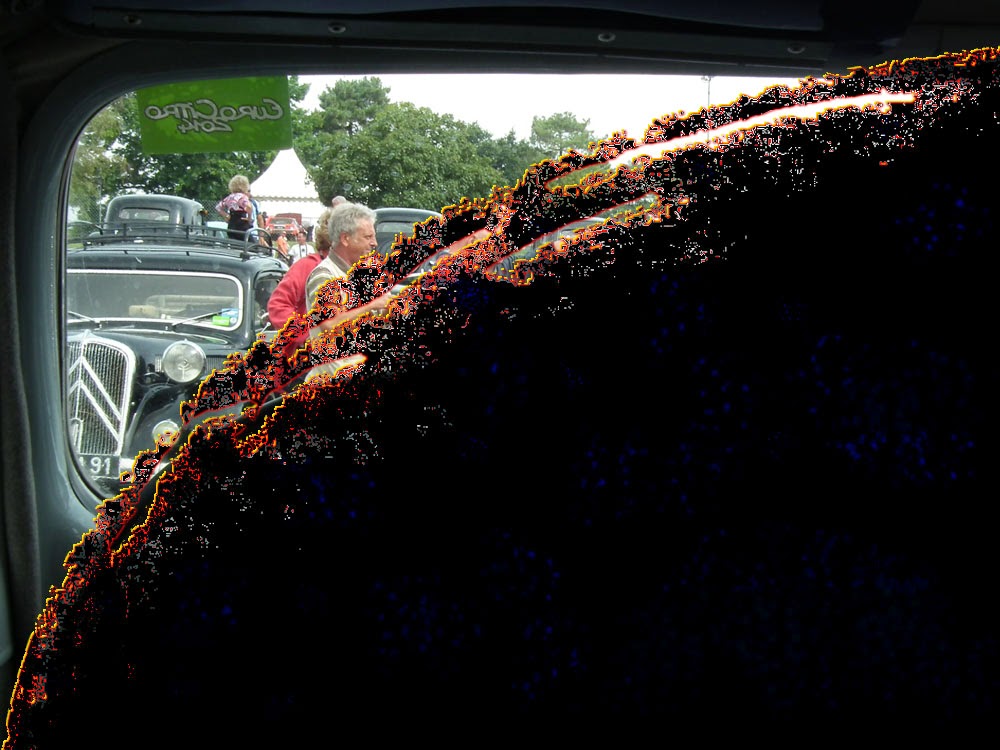 This was a bit of a worry - I had never seen that before, and hope never to see it again. After talking to people at the campsite we agreed I should drive home before it got worse, and that it was probably due to the fact I had massively overheated putting up the tent on Thursday afternoon.

When we got home, Susan rang a friend who had suffered a detatched retina late last year. He said that he didn't know if I had the same, but visiting A&E (hospital outpatients or Urgences) would be a good idea. So we drove to our nearest Urgences which is in Chatellerault to discover they had no opthalmologist (we knew that, but you should visit the nearest Urgences first up) and they referred us to Poitiers.

I was dreading the thought of visiting a hospital emergency section at 9.00 pm on a Saturday evening in the middle of summer - anyone who has done the same in Australia or the UK can tell you some horror stories, but it has to be said that both the hospitals we visited were calm, friendly places, with personal service (no numbers, you were called by name) and really quick. We set out at just after 8.00 pm and were home by 11.30 pm, having seen an intern, and having an appointment with an opthalmologist made for 9.15 am on Sunday(!) morning.

For 2. Shame you weren't able to enjoy the whole weekend.

For 3. Commiserations, and how did you get the pic?

Good luck with the recovery.

Gaynor - memory and photoshop. I had 24 hours to fix the image in my head, and am not likely to forget it.

I, on the other hand, thought it was something really clever!! ;o))

Ophthalmologists are nearly as common as unicorns in this neck of the woods. On a Sunday morning? The one I went to looked dreadfully tired and downhearted, but that was in an outpatients clinic with a waiting room rammed with clients. I suspect he works a 12 hour day. Maybe the hospital guys get the more interesting stuff, not just eye tests day after day. P.

Simon, E and I were so sorry to read of your emergency and have been wishing you the best. We hope you continue to mend.

We have missed you on this blog! Susan does a great job, but you bring something unique to it. Maybe once this is behind you, you'll come back to the blog. One can hope.

Best wishes for improved vision after whatever treatment is suggested. You will be in good hands in France. A friend of mine had double vision... tests were interesting, immediate and frequent. Heart, brain, etc were monitored! An MRI scan was required but he refused as the blurred vision started to improve. He was lucky as it sometimes does and sometimes doesn't ... possibly a mini loss of blood to the eye or that part of the brain that controls vision. All medical personnel were brilliant apart from one who was rather pompous. A year and more later he thankfully hasn't had problems. So, no driving for you which must be a nuisance with the business! Rest and keep stress free! It's good that you can type and make this posting! Best wishes.

Simon, how were you able to take that photo?
At least my visit to the emergency ward in Paris did not involve driving for long hours. I'm worried about this in Blois of course. We have a local hospital but we're told that for a lot of medical care we will have to go to Tours or Orléans. Same for the car (though not as serious of course). We bought a Volvo without realising that there is no Volvo garage in Blois!
I also had a retina scare recently - at the beginning of our month-long cycling holiday in Germany - but I don't have any ants, just little halos that float around from time to time and occasional flashes of light at night. I saw my ophthalmologist when we got back and it's the gel behind the retina that is thin. It will go away in time. I'll be watching out for ants though.

But, at the moment, you musn't get stressed....
so, treat Blogger as a new friend...
and get to know her gently.
She is much friendlier than Wordmess! I managed it...
and I am older than you by a long chalk.

Move gently through life...
then it doesn't get angry and kick you in the butt!

Keep taking the assorted dried frog pills and don't do any heavy lifting...
drink in half-pints only!

To quote from above...
"but you bring something unique to it"...
yes, you tend to look at the world sideways and can put it into words...
that makes other people think!

That's an excellent image of a detached retina.
I'm sure you achieved it by some computer wizardry but it should be on a poster in every doctor's surgery, train station and public toilet. Next to the one that tells you what to do if someone has stopped talking sense and might have had a stroke. The urgency of seeking advice is about the same.

I forgot to add that we do indeed miss your little gems of wit and wisdom on the blog and it might be worth trying Windows Live Writer.
It has ended my frustration with Blogger and stopped me from chucking the laptop down the stairs or out of the window!

Jean - so does that explain the times over the past couple of years when I have woken up and wondered why someone was parked with a yellow flashing light outside the bedroom window?

I may look at LiveWriter when I have worked up something else interesting to say :)

I think it looks like a piece of chocolate cake... Glad things are on the mend.