Bernard with Célestine in Montrésor. 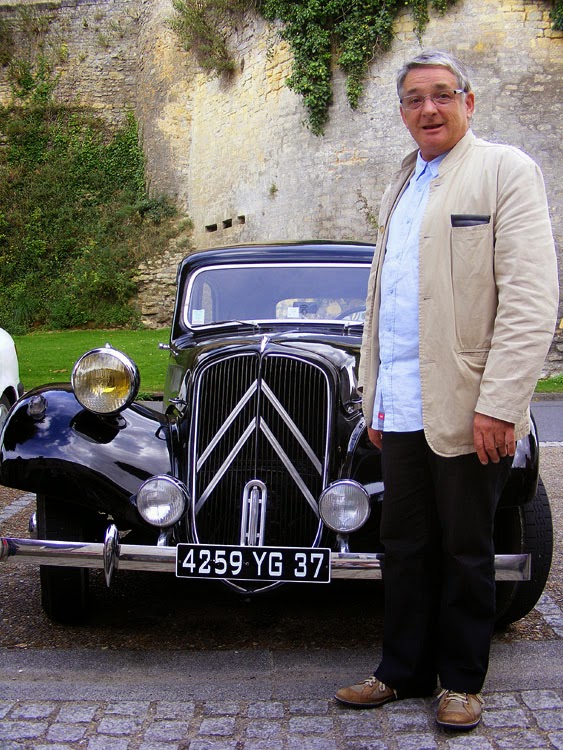 Meet Bernard. He has acted as our replacement driver while Simon has been unable to drive clients due to his eye operation. He is a retired chef who owns his own Traction Avant and belongs to the same car club as us. He grew up in the area, being born near Saumur, and has come back to live here in his retirement. 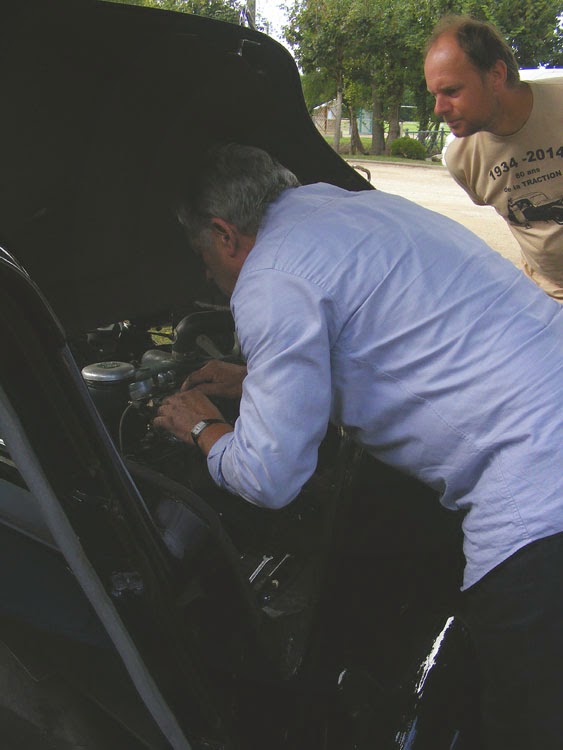 Bernard has been fantastic. He has had to deal with more than his fair share of Traction Avant shenanigans. On his first day out with clients Célestine's accelerator cable played up at Villandry, but with the help of a passing German Citroen enthusiast, he was able to whip out the tool kit and fix it in the car park while the clients went for coffee.


Bernard with his Traction parked outside the church at Candes Saint Martin. 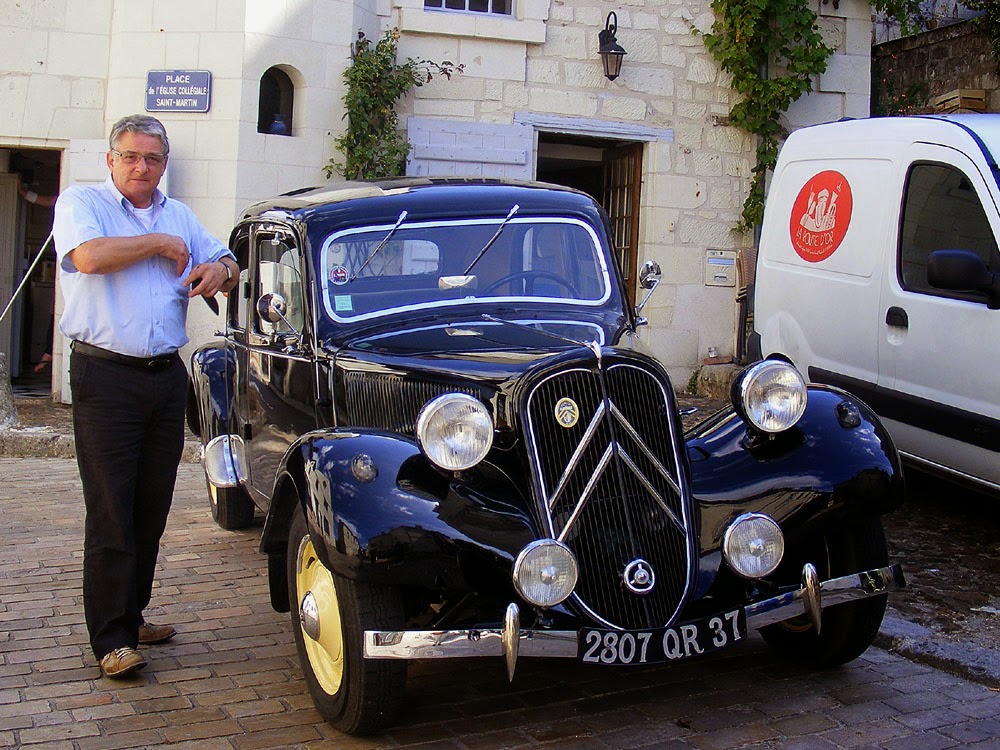 Worse was to come though. At Chinon two days later he was carefully exiting the top carpark and grounded Célestine on the speed bump. She refused to go into gear and he had to roll her back into a parking spot. Oil was leaking out of the gearbox. We both knew what this might mean. Traction gearboxes are delicate and need to be handled gently. He phoned Jean Louis, our expert mechanic, who expostulated 'C'est pas possible!' rather a lot -- he has repaired Célestine's gearbox in the past.  Bernard arranged for Jean Louis to pick Célestine up with the car trailer.

Then he phoned his nephew and arranged to be collected in Chinon so they could go and get his own Traction. I took the clients to the chateau as planned and we all met up for an excellent lunch at the restaurant Au Chapeau Rouge in Chinon. Phew! I would never have been able to manage the day so well without him. He is an absolute treasure (as is Jean Louis for coming to get Célestine at a moment's notice).

We anxiously await Jean Louis' verdict on Célestine's state of health and in the meantime Claudette is back in service.

It is very steep that speed bump! I am sure it does not conform to the European regs on speed bumps!! Great you had Bernard to help out.

As i can see, never a dull moment! Thanks FSM for Bernard!

As we will be in the Loire for 6 weeks soon Simon and Susan, can I apply as a relief driver - I work for the occasional bottle of local red and a slab of cheese.

I had wondered what would be happening for the clients. How lucky! I hope the medical treatment will also bring good luck. Patience!

Bernard really looks the part in that cream jacket - somehow reminiscent of Hercule Poirot, or at least the wonderful clothes, furniture and locations for the TV series.

Goodness, fancy having to handle emergencies like that and still carry on! I love Bernard's "look".

Like all commentators so pleased to see that you have found such an impressive relief driver, especially one clearly so appropriate – Traction owner and retired Chef.

Meantime hope that Celestine and customary driver are returned to health as soon as possible.

Leon: We thought of you already, but we think the difficult period will be over by the time you get here. Come and have a drive anyway :-)

Many thanks to all for their good wishes. As of yesterday, Simon is back at work, and doing really well.