What's Under the Chapel at the Logis Royal?

The archaeological dig of the Chapel of Saint Louis at the Logis Royal in Loches has recommenced. Last year the archaeologists found some 14th century tiled floor and the front door hinge. The site was covered over after a few weeks to protect the archaeology, and has been opened up again and extended to 150m² for a dig which will last the whole of September this year. It is being conducted by three archaeologists from the Indre et Loire Archeology Service and 8 students.

Several interesting things have turned up. At the moment there are lots of questions and speculation, but as yet it is too early to say for sure what they have found. 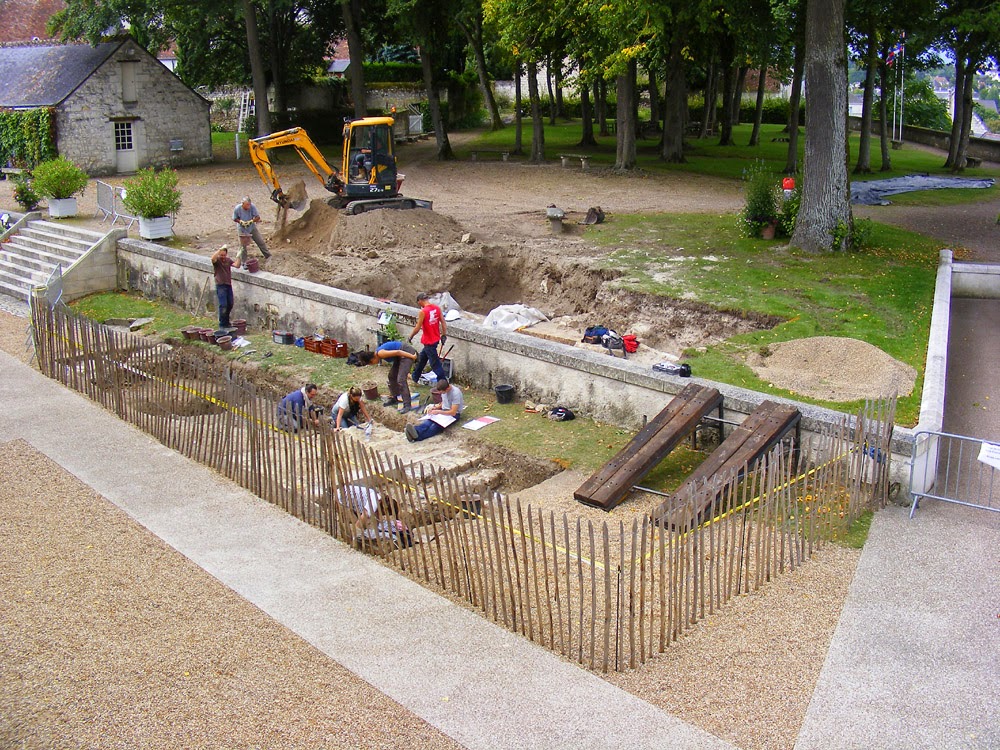 The foundations of the chapel are older than the Logis, dating from the time of the Counts of Anjou before becoming a royal chapel for the Valois kings, and the dig has the potential to shed light on nearly a thousand years of history. Until last year known only from medieval records, the building was most likely destroyed during the Revolution, but little by little it is giving up some of its secrets as the archaeologists dig.

It seems the rest of the nice tile floor was removed at the time of the demolition, and the only section which remains in situ is the small area by the front door that was discovered last year. This has turned out to be an advantage though. It means that the archaeologists have immediate access to layers below, dating as far back as the 12th and 13th centuries. They've found the opening to a void under the floor -- a cellar? an underground passage? a crypt? -- more will be revealed after some additional days of plying the shovels.

At the other end of the new part of the dig they have found a big circular pit. The best guess at the moment is that this is a 19th century pit to cast a bell. It is known that the chapel itself did not have a bell, and anyway, was already destroyed by the time this pit was created. However, it could be a pit to cast the bells for Saint Ours, less than a hundred metres away. The records indicate that these were cast in some sort of religious building.

There is also a 2m thick wall running obliquely through the site, confirming evidence from last year of an Angevin fortification here dating from 900 to 1200. And the lastest news is the discovery of a tomb dating from the 14th century near the chapel containing a dog.

********************************************
Charity Cycle Ride: Jim has posted details of his itinerary on his blog. He is riding the length of the Loire to raise money for two teenage cancer charities, one British, one French, in memory of his neice Esme who died last year aged 18 from a brain tumour. She was clearly a remarkable young woman to read Jim's blog posts about her. He will be riding through the Tourangelle section of the Loire on Monday 22 September. He'd love to have people there cheering him on and especially joining him on their bikes for even a few kilometres I am sure. He can be contacted via his blog, or through me. You can also donate by clicking on one of the links above.

*******************************************************
Orchard News: Our friend Tim came over with Betsy, his machine with a cutting blade on the front, and mowed the orchard. I raked up after him so at the moment the orchard looks like a haymeadow with the cut grass and wildflowers in windrows. There is one section he has not mowed however, and that is because to my amazement I discovered an Autumn Ladys Tresses orchid Spiranthes spiralis flowering there! This rare species brings to 7 the number of species we get in the orchard. Tim took some orchid seed from 3 species and 3 female wasp spiders to re-establish a colony in his meadow that died out in the cold.

I picked black grapes, apples and pears.
Posted by Susan at 09:00

Spiders released...
I'll come over and kidnap some more if that's OK...
I'll release some up near the potager... as, looking for some pix the other day, I noticed that the meadow was well flooded BEFORE the big freeze as well...
so it could have been a combination of wet&cold that did for the colony here.

And I forgot to photograph your Spiranthes until the light was too poor for a good pic.

Tim: The dog in the grave predates the ones on the steps, but it does go to show that the Valois were real dog lovers.

You are welcome to more spiders whenever you like.