The Adventures of Jack and Megan 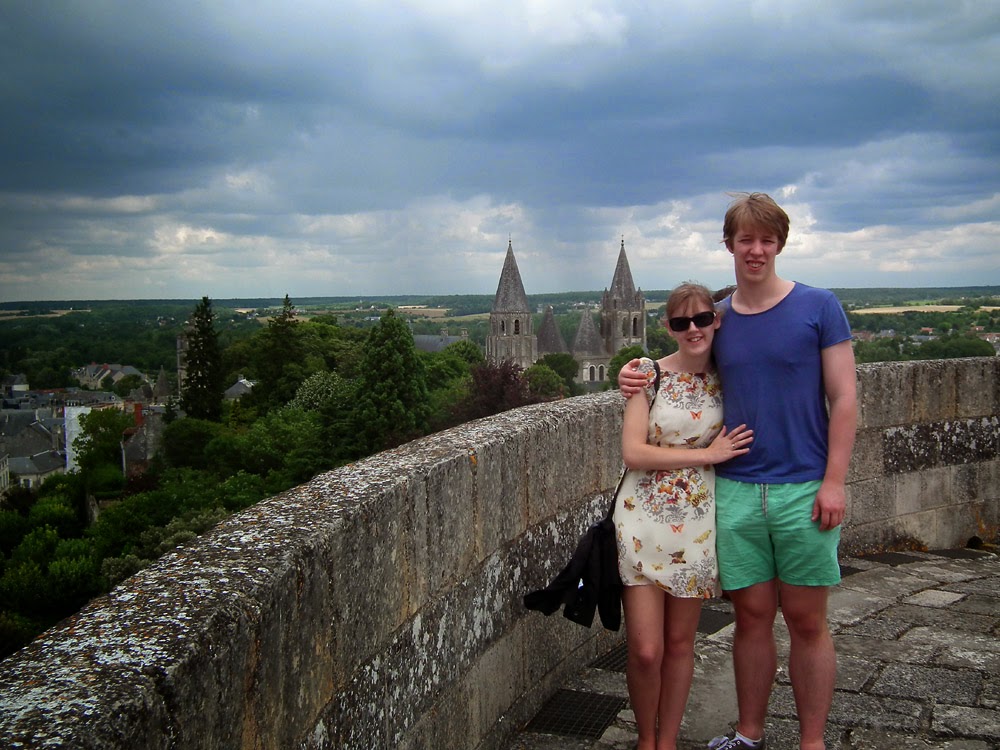 Just recently we enjoyed the company of some young persons, namely Simon's 20 year old nephew and his girlfriend Megan. She had just finished a summer school at Tours University Business School and he flew over to join her on a holiday in France and the UK. They started the holiday by staying a few days with us, the most exciting part of which was when they inadvertently flooded the bathroom, guest bedroom, laundry and toilet.


Jack wasn't very keen on the see through grill style walkway high up inside the ruined keep of Loches castle. He's a big girl's blouse, but Megan was unruffled. 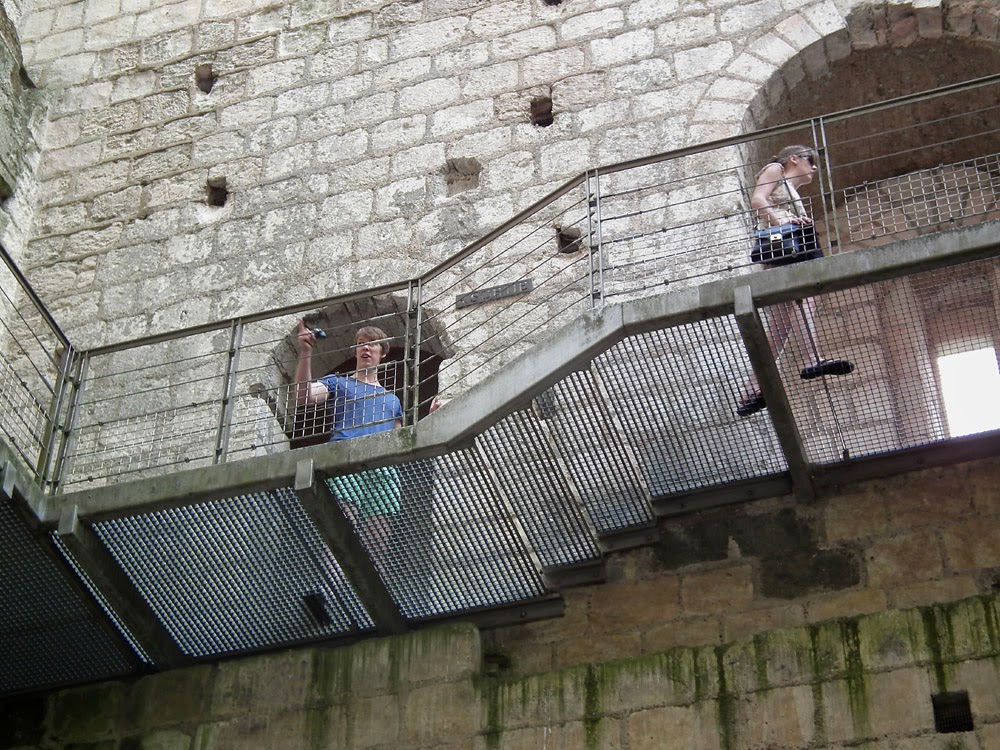 Taking an arty shot out one of the Martelet tower windows. 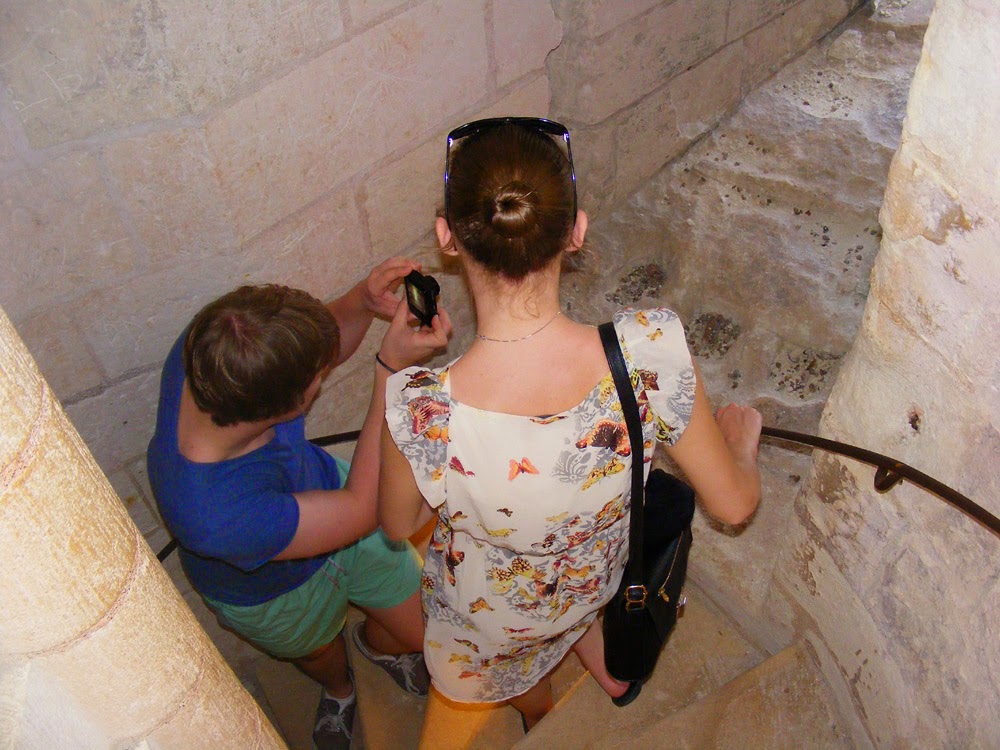 Uncle and nephew high jinks in the dungeon.
Simon is known as the Funkie (or Hunkie) Unkie. I am apparently awesome. 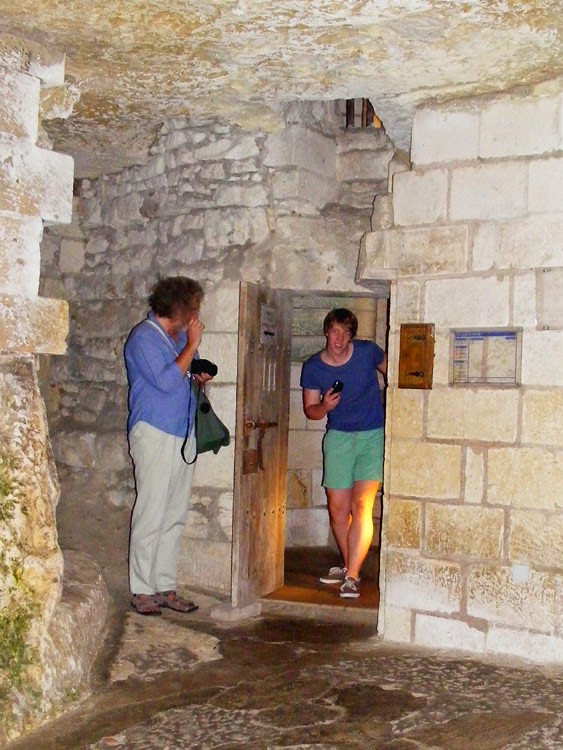 After they left us we had a week away with clients and they went off to Paris. At the end of the week we got an email from Simon's brother, which said 'Jack is OK. He is out of surgery now at a hospital in Paris.' This was all more than a bit mysterious and out of the blue as far as we were concerned. I texted Megan who told us that Jack had been operated on the night before to remove his appendix. Three days later he was on the Eurostar to London to spend some time with his great uncle and aunt (I expect they are awesome too, but possibly not funky).

*********************************************************
A la cuisine hier: Pasta with a sauce made using that technique beloved of mums trying to sneak some veg into their little ones ie pureeing. The veg I wished to disguise had apparently fallen by accident into the bottom of a bag of veggies I had requested from Tim and Pauline. I can't imagine how a round zucchini and a crookneck squash got there -- they certainly weren't on the list of lovely veg I asked for, and which Tim and Pauline very generously supplied me with. I believe some unsuspecting types left the party last week with similar zucchini and squash, so if you are reading this and feel guilty about composting the things, take my advice and puree with tomatoes, onions and peppers instead. And no, that does not mean I am ready for more.

Earlier in the day some almond blondies emerged from the oven. The recipe is on Simply Recipes and I halved the quantity of almond essence, resulting in a pleasing hint, rather than the sensation that I was about to inflict cyanide poisoning on myself. I love almonds, but almond essence -- not so much.
Posted by Susan at 09:00

I can't imagine how the zucchini got there. Possibly some secondary exchange of vegetables occurred. A veg-swapping party? Now there's a novelty.

"And no, that does not mean I am ready for more."
Awww! Shucks....
actually the person to blame will be RonRon....
she's the one responsible for everything around here...

Oh, and they aren't zucchini...
they are courgettes...
zucchini are those ghastly, thin, bitter skinned black things you have to peel to get a real courgette flavour!!

It sounds like Simon's nephew had a more exciting holiday than he bargained for!
The almond blondies recipe looks interesting but a whole tablespoon of almond essence does seem an awful lot.

PG: wouldn't we all just be exchanging zucchini?

Tim: I like zucchini. Courgettes I obviously have an issue with.

Jean: Yes. Apparently Megan made him go to hospital. Just as well!