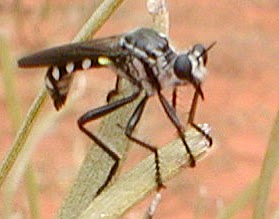 French Expression: La rocade = 'the ring road'. When we decided to go to Accident and Emergency with Simon's eye problem we initially went to Châtellerault hosptial, but they told us that to see an ophthamologist we would have to go to Poitiers or Tours hospital. Poitiers is much closer to Châtellerault, but we had no idea where the hospital was. 'Oh it's easy!' exclaimed all the SAMU nurses and even another patient in A&E. 'You take the autoroute then you get to la Rocade and turn right. It's well signposted'. This la Rocade place was somewhere we had never heard of, and never found en route, but we managed to get to the hospital all the same. Later, quite by chance, I was reading something unrelated and came across an explanation of la rocade. It turns out it is a regional word for bypass or ring road, not a place name. Since then I have encountered it in some directions for a botany outing later in the year too.

Eye Update: We went back to Poitiers hospital yesterday so the doctor could check on the intraocular pressure in Simon's eye. It has come down, but is still too high, so the dosage of his tablet has been increased and we have to go back on Monday to check again. This means I will have to go to Paris in the morning to meet our clients for the week and bring them back on the train. After installing them in their very nice B&B in the centre of Tours it will then be off down the motorway to Poitiers for Simon's appointment, and back up to Tours to prepare for the next day of touring with the clients. Looking forward to all that then (or maybe not...)
Posted by Susan at 09:00

Let us know if there's anything we can do!
We first came across the term "Rocade" when we hit Chartres. It's used pretty widely - Loches has one. There's a standard symbol you need to look out for if you want the ringroad, which you can find at http://commons.wikimedia.org/wiki/File:Rocade.svg
Problem is the signs tend to be rather small, compared with the destination signs.

It can't be regional tho'...
Amiens has signs to Centre Ville and La Rocade...
it is only when you almost get there...
the rocade signs stop and the silly little symbol appears...
take the wrong lane at that point and you are on the péage to Paris!!

T&P: I'd only ever heard périphérique before, and I don't recall ever noticing that sign you linked to (thanks for that). My understanding is that rocade is southern and périph is northern, more or less.

Amiens is way oop t'North...
and to my understanding only Paris has a "Terrifying-eeek"...
but I'm wondering now if it means more a "Big City" rocade like the "Great North Road" in Londres [Greater]...

A rocade is not necessarily a ringroad. In the case of Loches, for example, the rocade doesn't encircle the whole town. In the U.S., we'd call the rocade de Loches a bypass.

According to Wikipedia, French town and cities that have a rocade include Angoulême, La Rochelle, Saintes, Niort, Bordeaux, Albi, Rodez, Carcassonne, Toulouse, Troyes, La-Roche-sur-Yon, Rennes, Nantes, Pau, Lille, Caen, Lyon et Grenoble. The term is not regional but has its origins in military jargon. The Collins-Robert dictionary gives "bypass" or (military) "communications line" as translations.

Ken: Thanks for this.

It is called the périphérique at Caen. I found it on Wikipedia.