That disease most dreaded in Europe of tomatoes and potatoes has struck our potager. Our tomatoes are going brown before they've ripe and and their stems blotchy. I suspected blight, because other gardeners had been telling me they had it this year. I'd never seen the disease before, as it doesn't occur in Australia, and I've been lucky enough never to have had it before in the garden here. (This is why phyto-sanitation at borders matters and why Australia is so strict.) I looked up the Royal Horticultural Society page on the subject, and sure enough, my tomatoes looked exactly like the pictures on the RHS website. 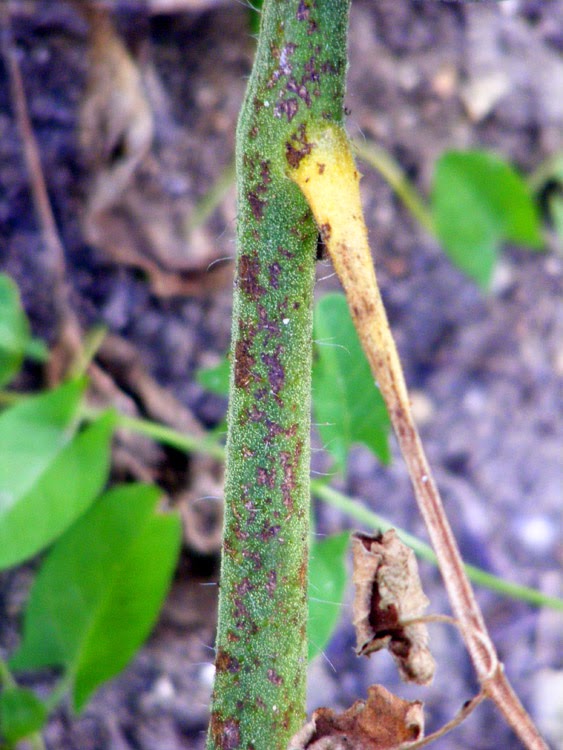 On Saturday I pulled out all the affected tomatoes (half my crop) and bagged them up ready to go in the green waste disposal at the tip. This is one of three options for dealing with the plants suggested by the RHS. I'm not totally convinced that I'm not just passing on my blight problem to someone else, but digging a deep enough hole to bury them in a place that wasn't going to be disturbed, or burning them, seemed logistically quite difficult.


Then the freckles coalesce into nasty leathery brown patches. 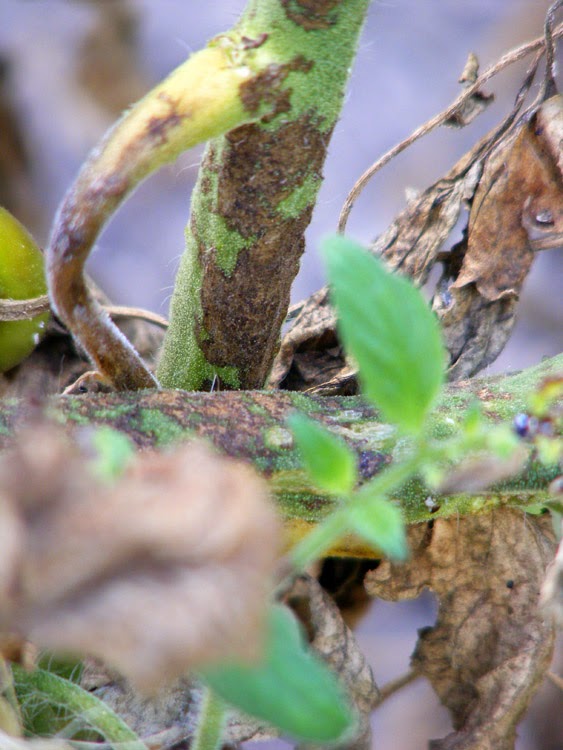 The frustrating thing is that all the affected tomato plants had healthy leafy growth and burgeoning tomatoes on top. The disease, even on the worst affected plant (naturally the biggest plant with the most tomatoes on...) had only reached about half way up. However, the whole plant will inevitably be affected once it starts, so I am not even attempting to ripen the perfect looking tomatoes on the kitchen bench. They've all been thrown out with the plants and the fruits that have gone brown. The other frustrating thing is that the plants had fantastic root systems, far reaching and robust, responding to my new watering technique using a trench down the middle of the bed. This method of indirect watering should be ideal for preventing blight, as it minimises water splash and the plants don't get wet. I'll definitely use the technique again. I've just been unlucky with the humid weather this year. I've decided not to grow tomatoes or potatoes at all next year, and then not grow them in this year's bed for a few years after that. All volunteers will be ruthlessly expunged.


The fruit starts to go brown. 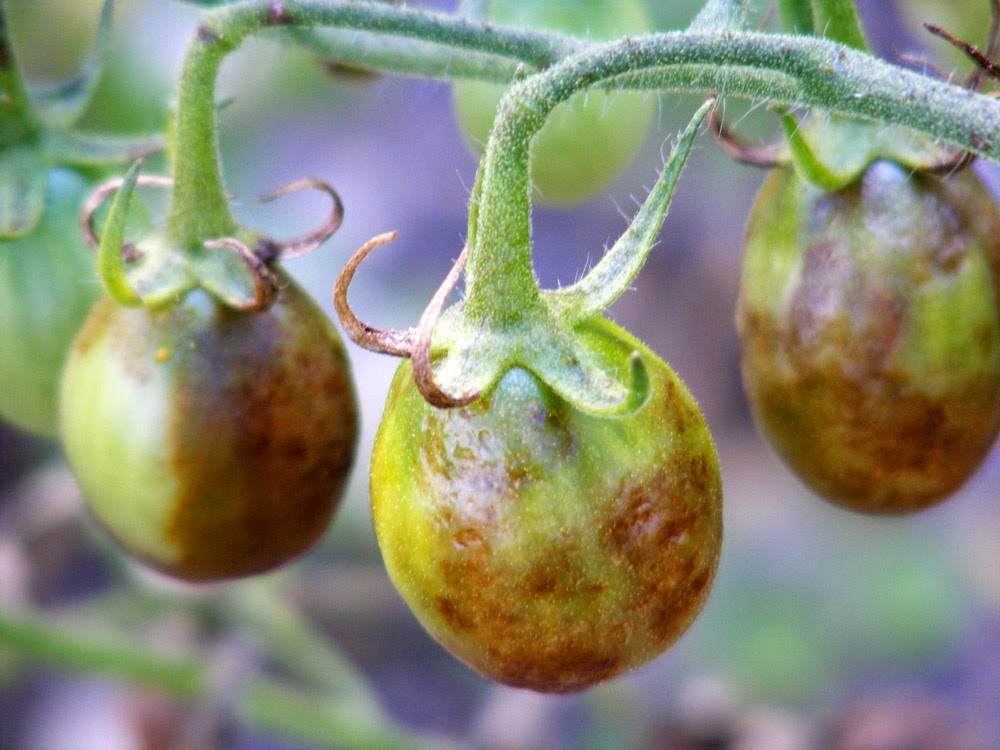 In previous years I've grown some tomatoes in pots at the house, as well as in the potager, as an 'insurance policy', but this year I decided not to. The potted tomatoes are quite a bit of work, requiring feeding and watering more frequently and we are not always home to do it these days.

What I'm hoping is that the tomatoes at the other end of the bed, currently unaffected, will stay that way, but I think it's likely that I will lose at least a couple more. I'm hoping the ones that are the other side of a zucchini plant to those I've just pulled out will be protected by the intermediary zucchini and not pick up the spores. We'll see. Of course, these plants that might survive are the weediest, least productive tomato plants of this year's crop. 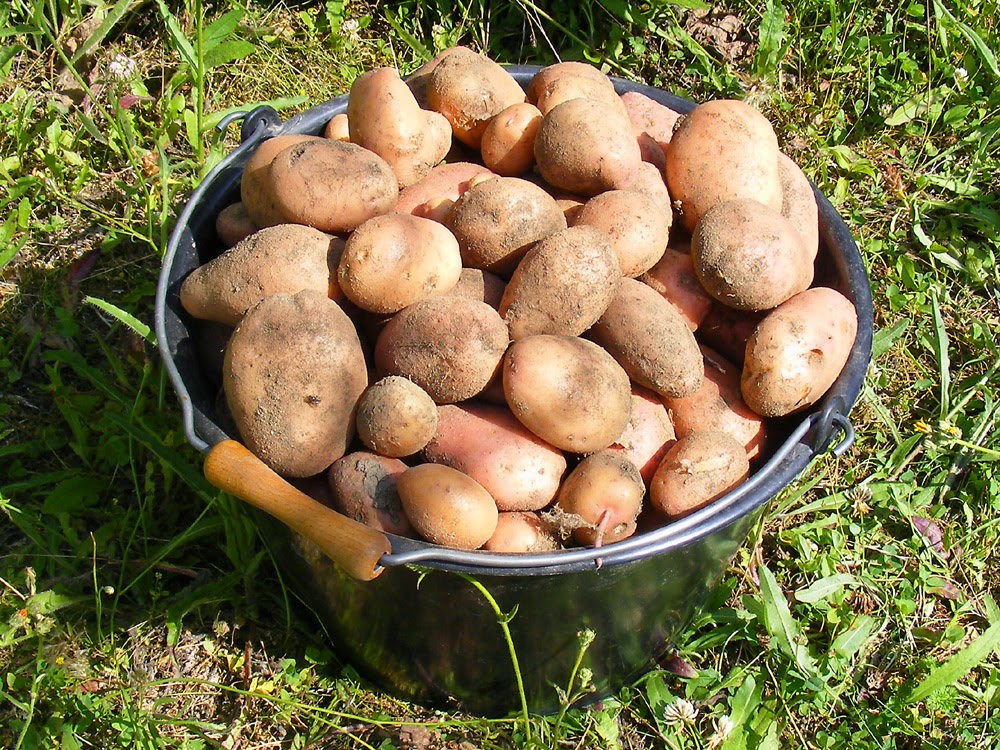 Last Tuesday I dug the potatoes because their leaves had gone yellow and noticed that some of the tubers closest to the worst affected tomatoes showed signs of blight too, although there didn't seem to be any signs of the brown blotches indicating blight infection on the above ground parts of the plants. I got 14kg of potatoes from 22 plants. Not too bad I thought. They were planted for me by our friend Liselle while she was here in April, and as an experiment I got her to sow some 'wildflower' mix to try to keep the weeds down. It worked very well and was really pretty, but it did make the spuds more difficult to dig. 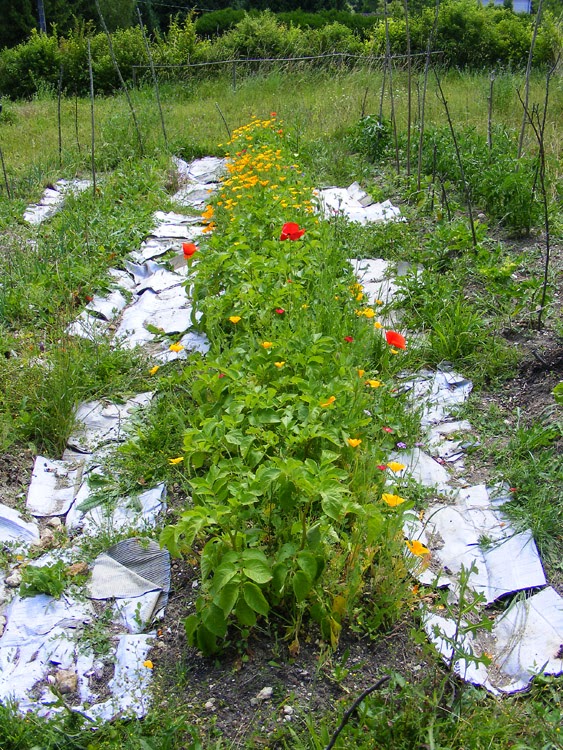 I've cooked up any tubers that are clearly affected by blight, but there are probably more in the potatoes I've stored in the pantry. I'll have to keep an eye on them and may end up cooking a lot of potatoes very quickly. Thank goodness for freezers! Chunks of cooked potato don't freeze well, but mashed potato does, and we mostly eat potato as mash.

The disease, caused by a fungus like organism, rots the potato just under the skin, causing lesions. Like most of these 'fungus like organisms', in this case Phytophthora infestans, an oomycete, there is no treatment once the plants have the disease. As you have probably guessed, the organism was the cause of the potato famines all over Europe in the 1840s. The only possible treatment by the home gardener is prophylactic applications of copper based biocides such as bordeaux mix, which is so appallingly toxic to man and beast that I really do not wish to use it, especially multiple times throughout the season, just on the off chance there is blight about.

We have it too. That's 78 tomato plants and 7 beds of potatoes. At least peppers and aubergines don't get it. I spent yesterday cutting lumps off affected plants and bagging them for the tip. Some plants seem to be recovering - the spots on the leaves have dried up and there's no sign of the stem rot that's the real killer. This is "early blight" which I haven't experienced before either.

Second disappointment in the same day! We have grown our first crop of tomatoes and, having read your post, I see we have blight too. So far, it hasn't struck the potatoes (as far as we know). We just picked them and ate the unaffected half because we thought it was a watering problem. I suppose we won't get sick from it! We're going down on Tuesday so we'll be able to see the damage. Damn.

Fraussie: There is no problem with eating affected tomatoes. If they don't rot they will ripen but never get as sweet. I would dig your potatoes as soon as you can, because mine showed no visible signs above ground (that I recognised anyway). If you recognise the problem in tomatoes early you can save them by removing affected parts, but once it is in the stems you might as well pull them up and destroy them.

Susan, you can cook with the ones that aren't as sweet... and if the result isn't quite sweet enough... add a little honey.

As it is early blight, we are chopping chunx and seeing what the tops will produce...
but this wet will cause further damage if it becomes "warm&humid" after...
but "black bag" and send to the landfill your tops if you haven't got an incinerator.
Old practice was to burn diseased plants... still holds good if you aren't in a smoke free zone...
Leeds became smoke-free and bonfires were banned by the council!
Allotment holders have noticed an increase in the level of infections in the years since.
Older ones said sod-it and bought incinerators!! [On the grounds that they weren't a bonfire??!]

The Stemster and other spuds will be lifted as soon as we can get out there seeing the size of the ones in your bucket...
nice crop.

We had this blight on our tomatoes really badly in 2007, which was the wettest of the 12 summers we've experienced. No potatoes here.