Recently we went to a barbecue at the family home of someone whose property extends right down to the river Claise in Preuilly (well, technically Boussay, as not all of Preuilly's houses fall within the communal boundary). It gave us an opportunity to get up close and personal with the weir that serves the Moulin de Chanvre. The Claise is an unclassified river, so the landowners either side own to the middle of the river. This gives them fishing rights, but also the responsibility of maintaining the weirs, sluices, side channels and river banks on their patch.


Fancy a swim? You can go from here right into the centre of Preuilly. 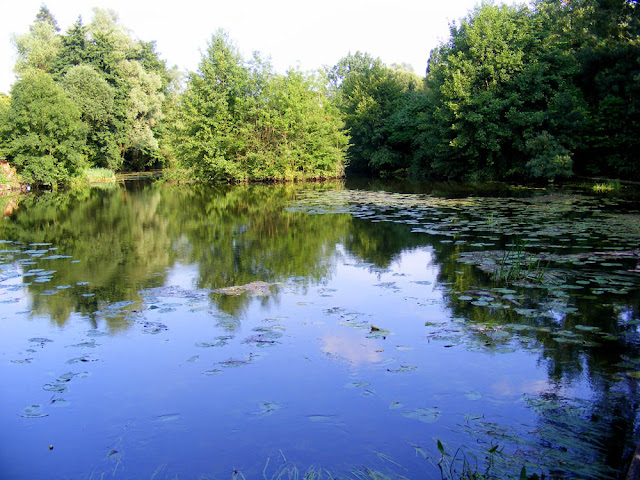 Martin, our host, told us that he learnt to swim in the pool below the weir, and that both sides of the barrage are safe (there's not much flow, and it's not very deep, so no worries about undertow). One side of the property includes part of the old Roman route between Preuilly and La Roche-Posay. Technically, Martin's family own the remains of the Roman / Medieval bridge, which form an island in the middle of the river.


Martin and me, sangrias in hand, standing on the weir and discussing the finer points of river management. 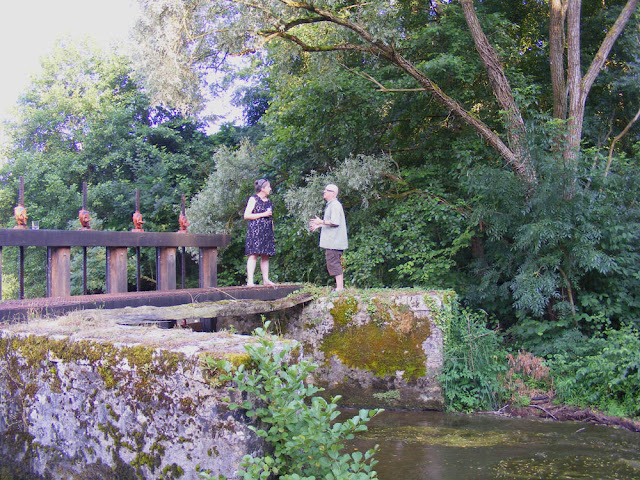 I was tempted by the idea of wild swimming, but I expect the water is fairly cold. Last time I went wild swimming, in the Northern Territory nearly 10 years ago, I was horrified by how feeble I was against even the most gentle current too. There's lots of water lilies to get entangled with in some places, not to mention submerged fallen branches. Plus, Martin tells me that the river now has silure, huge catfish sometimes a couple of metres long, which eat everything in the river. He says he no longer gets moorhens, as the silure have eaten them, and I don't fancy sharing the water with them. (Mind you, they will take coypu too, so there is some benefit to having them...) He also told me he has often encountered snakes in the water, which didn't surprise me -- couleuvres (grass snakes) often swim, and will hunt frogs. They are no threat to swimmers though.


The weir was completely restored a few years ago by the owner of the Moulin de Chanvre. They didn't receive a grant to do so, but the job has been done to the highest quality and will no doubt last for many years to come. This plaque is charmingly discreet and modest. Note the photographer's temporarily abandoned sangria glass... 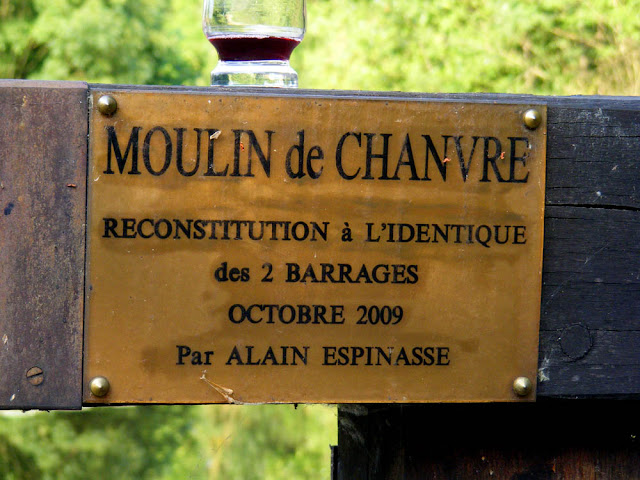 When he was young he used to catch eels and crayfish by setting out bait overnight and retrieving the catch before school. The crayfish have all gone now too. His father was the local vet, and the property has always been run in a way that respects nature. Martin has allowed the small stream that runs down the slope through the property to join the river to become full of vegetation so as to be a haven for wildlife. He's rightly proud of the fact that he can live with 'untidy' fringes to the garden and scythes rather than motor mows the grass.

We felt really privileged to be allowed to share this special place and learn about it from someone who has known and loved it all his life.

Email ThisBlogThis!Share to TwitterShare to FacebookShare to Pinterest
Labels: nature and wildlife, Pictures of Preuilly

5mm yesterday and 5mm overnight... will have watered to at least 10cms...
no need to water for the next few days.

Meteo60's Agricultural forcast shows a possible 17.6mm evaporation/transpiration by Saturday and is still in the green.
Soil temp down to 17 Centipedes, though. Possibly a good time to sow more lettuce?!!! MORE LETTUCE!!!?

There is a great picture of a couleuvre in my latest issue of Nat'images... for the Montier Festival Photo this November...
an underwater shot of a grass snake with a frogs legs "handle-bar moustache"... and a fine one it is, too!

Great post about one family's love of their patch of land.

Tim: thanks for the moisture update, very useful. And I don't need to sow lettuce, I currently have 3 in the fridge (and we just finished a fourth for lunch). I can't convince our orchard neighbour at the moment that we already have a lettuce so they just keep piling up. And if he runs out, I'm sure you will be happy to offload a few...

We got 32 mm of rainfall yesterday and overnight. No watering needed for a while. We're getting a lot of cukes and a steady number of zukes these days.

Ken: I think we got significantly more rain than Tim too.

I had no idea you could say wild swimming in English but I checked it out! My favourite wild swimming was in the waterfall pools in the rain forests in North Queensland - you don't have to share with funny fish and fowl. I also liked swimming in the local river when it was in spate when I was at uni. It's a wonder we didn't all get drowned!

Fraussie: Exactly! We used to all head off to the creek to swim, none of us more than 10 years old and no adult within cooee. It's too horrifying by today's standards! We didn't swim in the dams though.