Prickly pears Opuntia spp were introduced at the time of the very first white settlement. The idea was to break the Spanish South American monopoly on cochineal. This red dye is produced from a scale insect that feeds on the prickly pear and was required for making British military uniforms. Initially the plants remained well behaved at the coast, but then someone planted them at a homestead garden in the bush. At some stage several different species were introduced and other people planted them as stock proof hedges or emergency stock fodder. Once they got inland, before anyone could draw breath, the prickly pear had multiplied in the wild and rendered useless a huge swathe of southern Queensland. There are old photos from the early and mid 20th century showing the extent of the problem. Where once cattle grazed, now there was an impenetrable forest of cacti, covering over 24 million hectares and spreading at a rate of a million hectares a year. 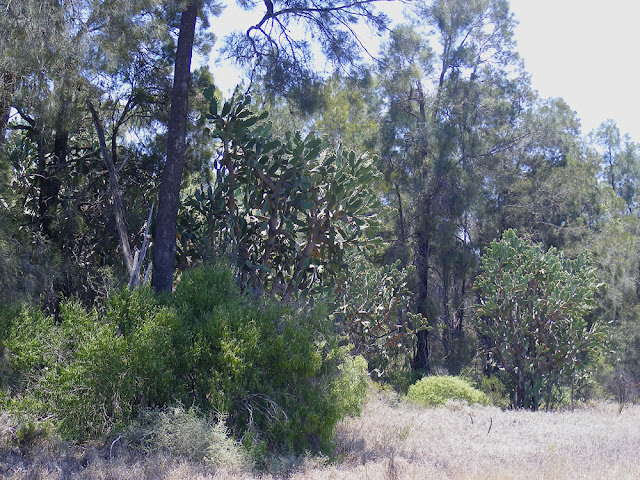 The government of the day was desperate. They organised programmes of control, trying burning, poisoning and physical damage or removal. Nothing worked, and frankly, when you read the litany of poisons used, it is amazing the whole area isn't completely toxic to this day! Reminiscent of the phylloxera outbreak in France at much the same time, a reward was offered to anyone who could eradicate the cactus. Like the phylloxera reward, it has never been granted, as the pest has never been completely eradicated.

Finally, however, in 1912, the Prickly Pear Travelling Commission was formed. Their objective was to identify possible biological controls by visiting countries where the cactus was indigenous and obtaining species that would be safe to introduce into Australia (ie be prickly pear specific and not move on to other plants). Enter the Cactoblastis moth and its caterpillars, as well as a dozen other natural predators of Opuntia spp. After researching the effectiveness of the predators, it became clear that the Cactoblastis moths were the star prickly pear destroyers. After the First World War the government set up a Cactoblastis moth breeding centre and eggs were distributed to landholders with instructions for their use. Within a decade the problem was under control! 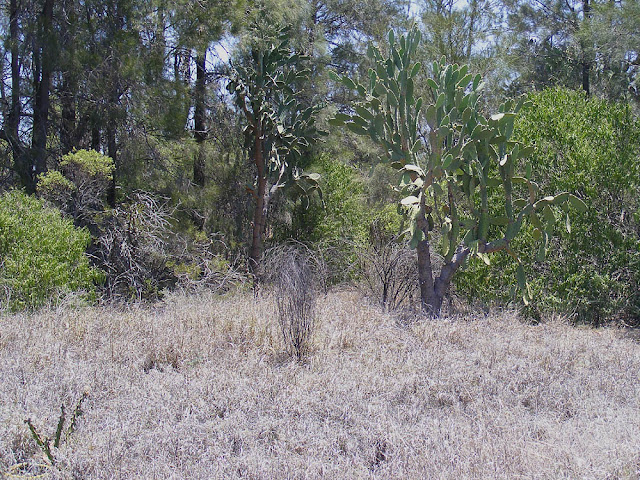 These photos of the roadside vegetation were taken while we were queuing for roadworks. Note the wizened plant in the left foreground -- the Cactoblastis have been at work.

I am very familiar with the prickly pear and its amazing story, as we lived on a farm within the affected zone. There is a memorial to the Cactoblastis moth in a town not far (in Australian terms -- it's 170km away) from where my parents live. So now you know why I am so horrified when people tell me they have smuggled cacti or other plants intercontinentally. 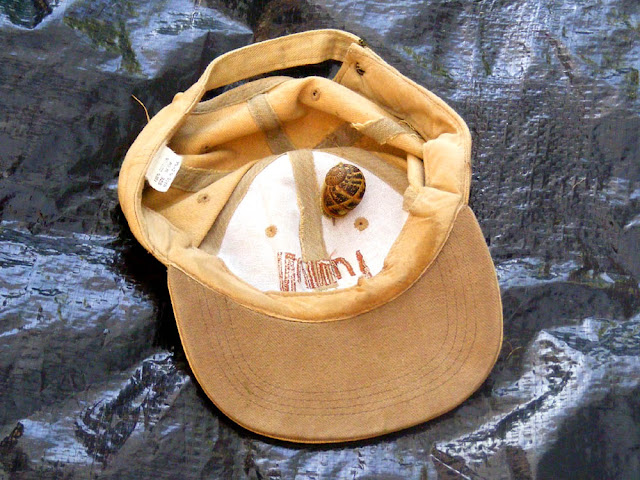 A la cuisine hier: The liqueur de noix has developed a scum. At first I thought it was growing some undesirable fungus, then I realised it was a slick of walnut oil. The vin de noix smells divine -- really rich and walnutty.

I was joined by a very yellow female Great Green Bush-cricket Tettigonia viridissima, who looked just like a yellowing leaf, and rushed towards me when I knelt down to photograph it. It zipped up my knee and over my shoulder, sat there for a while, then flew back down to the grass. I'm not quite sure what the attraction was -- probably I was a good hunting stand. Also hunting in the potager was a female White-tailed Skimmer Orthetrum albistylum dragonfly and an extremely muscular looking robber fly, Pogonosoma maroccanum, hunting bees. The robber fly is a bee mimic, black with golden 'fur' and weightlifter's thighs. It had better eyesight than me, and refused to co-operate for photos. No matter how much I sneaked up on it, it always saw me first and moved. They seem to specialise in bees as prey. Fortunately, given the poor quality of my photos, it is a striking and unmistakable species and I identified it easily. A nice new record for the orchard.

On the way down to the orchard I passed our firewood merchant, energetically weeding his potager (he does most things energetically). He tells me all his tomatoes (cent pieds! that's '100 plants'!) have blossom end rot. According to him all the treatments that worked on this fungal disease are now banned, and anyway, he didn't want to be treating tomatoes intended for his personal consumption. We took the opportunity to discuss the coming winter's firewood supply and I have ordered 10 stères to start with, but we will probably need about 14 by the end. He said he'd used an unusually high quantity of firewood last winter, not because it was particularly cold, but because it dragged on for so long. He asked me if we had storage space for 10 stères all at once and I said I thought we did. We've used all of last year's firewood...because winter dragged on for so long...

Susan,
you cannot treat against blossom-end rot with a fungicide anyway...
it is internal to the plant and is caused by drought... NOT a fungus... but fun guys attack the weak bit later.

Like a lot of our allotmenteer friends, we discovered that watering...
REGULARLY...
was the best remedy.
And an occasional dose of epsom salts in the water is said to help... it seems that inability to get magnesium from the soil is a root cause...[ugh!].

I knew irregular watering caused blossom end rot, but since that didn't preclude it being fungal, I took his word for it. I wonder why my toms don't get it?

All those millions of hectares of cactus is astounding isn't it? I was really amazed when I looked up the details for this post, even though I knew it had been a huge problem.

Susan, some varieties are more su-scepitcal than others...
we've found that the long thin types [San Marzano, Roma, etc...] suffer the worst...
and the round ones and beefeater types the least.
And never on the little cherry toms... there you are more likely to suffer from split skins.
It is the seeds furthest from the stem that suffer...
we've had San Marzano that have looked fine on the outside... then cut them in half for drying and you find you have a bit to cut out beforehand.
Note; it doesn't affect the flavour or keeping properties of the processed ones...

After reading your story about the prickly pear cactus in Australia, I did some research and found this site about this kind of cactus in Texas.

What works for some doesn’t necessarily work for others. I’m sure you’ll be interested in reading the last five paragraphs dealing with Cactoblastis cactorum.

We have lots of prickly pear in
Texas, even on our property....
complete with cochineal. It is
sold for consumption too, sans
thorns. It's supposed to be very
nutritious as are the "pears."
Staple of the Mexican diet.

Heard an interesting discussion
yesterday on the future high price
of meat which may result in the
increased consumption of insects
for protein. To encourage this it
was said that in Australia locusts
are now being referred to as flying
prawns. Gave me a good chuckle!

Sheila: I'm getting a lot of stuff through on the entomology mailing lists about entomophagy (eating insects) at the moment. A few people are really mounting a campaign.

The pears are sold or used where I grew up in Queensland too -- you make jam with them.

Susan, what's the price per stère these days? Now that we've exhausted the chopped-down tree left to us by the previous owner, we'll have to find another supply. And JM's a BIG consumer.

And while I think of it, we harvested(?) the potatoes, onions and garlic. I'm not that keen on the potatoes but the onions are quite delicious. I've never seen such strange garlic though.