L'Epopée Médiévale (The Medieval Epic) is a sort of free flowing outdoor performance by co-ordinated troops of semi-professional re-enactors, supported by local people and the staff of the various historic monuments in the town where they are performing. For the last couple of years it has been staged in Loches over the Assumption weekend. Assomption was on a Thursday this year, and although the Friday isn't a holiday, many people took the day off, faire le pont in traditional French style, thus making it a long weekend.


These mummers may be powerbocking but they hark back to a pre-Christian tradition, and some of them are genuinely scary. 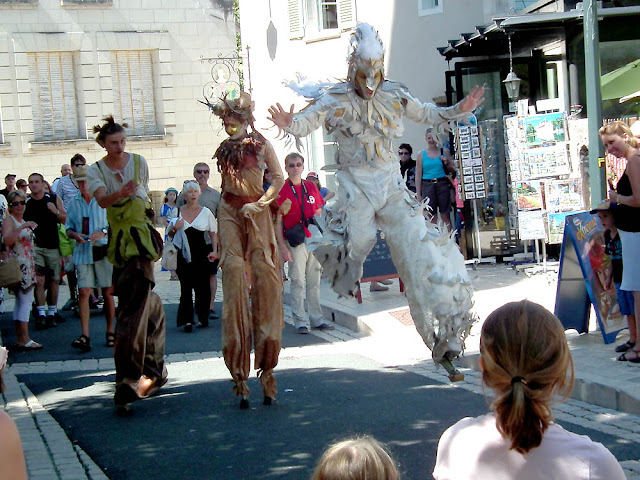 We had never been to this event before, but this year we had visitors and decided to spend the day in Loches on Thursday. To be honest, we'd forgotten about the Epopée, and just wanted to show Jon and Rosy a charming small town with good medieval and renaissance buildings and go to a good restaurant for lunch.


Serious bagpipe alert!
(The percussionist is 'doing a plastic' instrumentally, and the bagpiper on the right has the nattiest facial hair, which unfortunately you can't really see in this photo.) 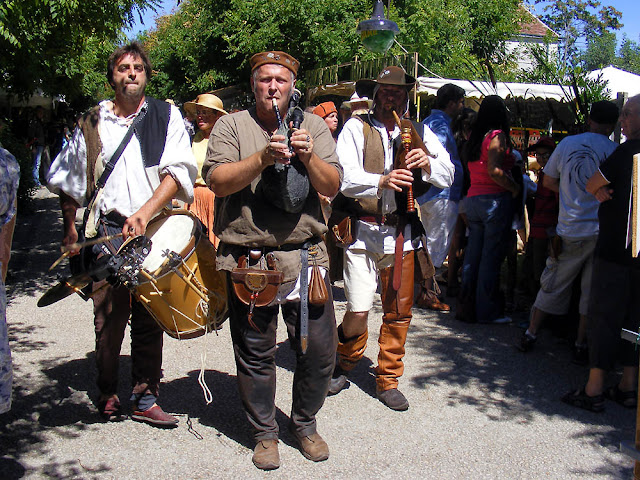 The Epopée was free unless you wished to enter the grounds of the Logis Royal or the Donjon. Most of the stalls selling medieval wares were in the free zone up on the citadel near the church or in front of the Donjon. If you wanted to buy a medieval costume or accessories, there was plenty of choice, all taking a very professional attitude to authenticity. The tented encampment with trebuchet demonstrations and 'learn how to wear armour' sessions were in the grounds of the Donjon. On a normal day you don't need a ticket to get into the park around the Donjon. I am aware that the lack of free access to this area is resented by some visitors who don't think it is value for money at €9 a head (a combined ticket that gets you full access to the Donjon and the Logis Royal). The ticket booths are set up at the gates of both buildings and you get a stamp which you then just wave at the person on the gate at the other location.

Luckily for us, the guys at the entrance recognised me and the four of us got in for €5 a head, which I thought was perfectly good value. Once in we decided to opt for the medieval fare for lunch and had tranchoirs (basically open sandwiches with cured meat, slabs of cheese, gherkins, sultanas and nuts). We passed on hypocras or the various fairy or hobbit elixirs, and just went for beer though. Later we went for cocktails at Le Caravage, which were, as usual, superb and extremely good value whether alcoholic or non-alcoholic.


Guards at the Porte Royale, the only entrance to the citadel of Loches. These guys come from the re-enactment group Medio evo. 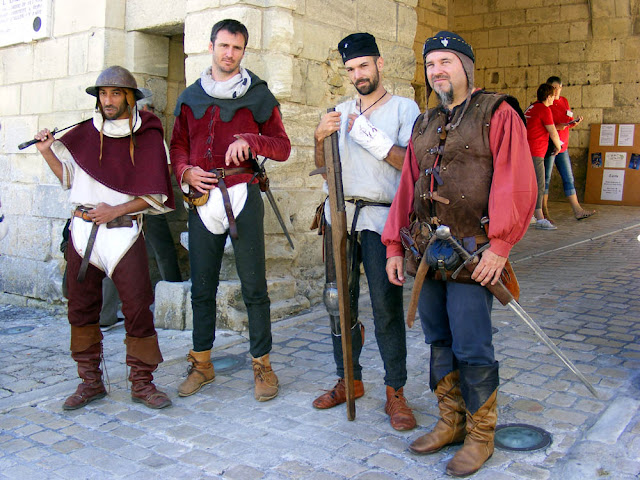 Being an erstwhile member of the Costume Society, I am fairly beady when it comes to spotting the anachronisms and anyone 'doing a plastic' (as the English re-enactors call it). I was most impressed by the quality of the costumes here and the way they were worn. Where manmade textiles had been used, they had been chosen carefully so they had the right weight and fall. There were a few modern touches, but of the sort that can be forgiven if they are done discreetly (modern prescription spectacles, kids in modern shoes, spring-loaded stilts). Most of the costumes had been at least partially machine stitched, but when it really mattered they were hand stitched, and everyone accessorised carefully, with some excellent belts, purses, weapons, head gear and foot wear. All the costumed characters were only too pleased to chat about their roles and be photographed. They were also fantastic at involving kids in the crowd in the performance and generally entertaining whilst staying in character.

We had a great time (except for periodically having to dodge the bagpipes...)

Gooseberry Crumble. I keep a jar of crumble mix in the fridge so I can whip up a fruit dessert in no time. Jean's gooseberries were a real treat. I had forgotten what a distinctive flavour they have. Served with proper homemade custard of course. I'll be able to make fool with the rest today, but I have to wait until the laitière delivers some cream at lunchtime.
Posted by Susan at 09:00

The number of people there also confirmed that €9 is toooo expensive. We all don't get discounts... €5 is a better price altogether.

C&E: The €9 is only €1.50 more than the normal entry fee for the combined site. So the only difference is paying €1.50 for getting in to the park around the Donjon, where they had added value by holding demonstrations of medieval warfare. It is extremely unlikely this event makes money -- not because people don't come, but because it always costs more per head to stage this sort of thing and tidy up afterwards than visitors are prepared to pay.

chm: so they've deliberately put Assumption on a Thursday this year just to confuse the heck out of me?

How can you tell the difference between a bagpipe and a cat?

Saw a similar Medieval parade in Beziers last year - just by accident as we were passing thru.