There is a second donjon in Loches, perhaps less well known than the imposing medieval structure, but nonetheless interesting. I thought it was a really cute idea to call the insect nesting and hibernation structure in the medieval garden at the big Donjon de Loches a 'donjon' too, rather than the more usual 'hotel'. Donjon in French is not dungeon in English, but castle keep, and so it is the insect keep. I like that. 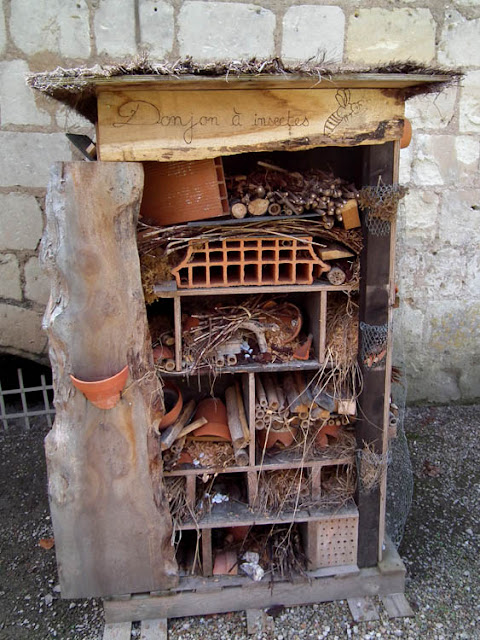 They don't seem to have any solitary bees using the various holes designed for them yet, but I don't know how long the structure has been up. My advice is not to despair -- even if nothing seems to be using it in its first summer, it will get used over winter, and slowly, slowly, creatures will adopt it during its second summer.

Email ThisBlogThis!Share to TwitterShare to FacebookShare to Pinterest
Labels: Gardens and Parks, Insects, Loches and area, nature and wildlife

The "donjuan" has been up for around three years...
it was in the "medical" garden...
but it looks as tho' it has been moved.