The garbage is collected in Preuilly around 7 am on Thursday mornings. Until about 12 months ago it was a 4 am collection, so I'd never met the garbos. A 7 am collection means that I am up and about and it's light enough to take photos in the summer, so I did. They were highly amused and asked me if it was because they were so irresistably attractive. I assured them that was the reason I rushed out to photograph them, and told them they'd soon be world famous because I would put the photo on the blog (although, just between you and me, I think they may find they have serious competition in the form of Laurent the maître-nageur, but he's only here for the summer, so I guess they have the advantage there...).

They work for the rather Bondesque sounding Smictom, whose company motto is 'Au pays de Descartes, je pense, donc je trie' ('In the land of Descartes, I think, therefore I sort') which has always made me giggle. 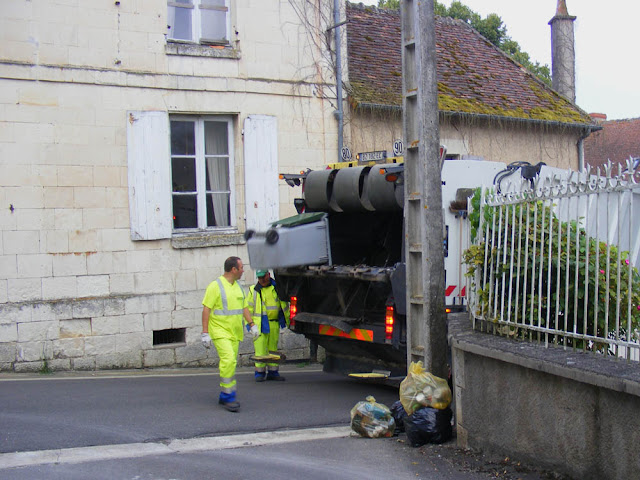 One of the differences between life in Europe and life in Australia that amazed me when we first moved was that people put their garbage out for collection on the street in plastic bags, with no other protection. Nowadays people often have wheelie bins, but 16 years ago when we first arrived in London, the dustmen, as they are quaintly known there, just wanted to be able to grab the bags and sling them in the back of the lorry (as they would no doubt call it). As you can see in the photo, the Preuilly garbage truck has the facility to tip a wheelie bin, but of the three households who put their waste on that corner, only one uses a bin. It is very rare that a bag gets ripped open in the night by wandering wildlife or dogs.

The 50 litre yellow bags are for recycling (most plastics, metal, tetrapaks) and the 25 litre black bags for anything unrecyclable and I pick up our allocation from the council once a year in March. Newspapers and magazines and glass must be taken by the householder to the recycling bins located in several places around the town. We compost our food and garden waste and some paper (and burn woody garden waste in the winter). The rest goes to the local tip, sorted into various categories for recycling and run by the superbly organised and neat and tidy Didier.

The usual French word for household rubbish is poubelle, after Eugène Poubelle who introduced the idea of rubbish bins in France in the 19th century, but more formally it is ordures ménagère. Sometimes you also see déchets ménager. The tip is the déchetterie and the bottle and paper bank is a station de récyclage.

*****************************************************
Picnic in Chaumussay: We had a shared picnic in Chaumussay yesterday to celebrate our friend Pauline's birthday. We supplied a fougasse and some limoncello and blueberry cake along with sparkling and liqueur Vouvrays (note for future reference: Chateau Gaudrelle Brut Tendre is a perfect match for fougasse topped with salt, onion, olives and cheese). Tim made potato salad, cucumber salad and chickpea and spätzle salad, Pauline made an eggah and an apricot clafoutis and they brought a sparkling rosé. Niall and Antoinette brought ham and a Spanish omelette (tortilla). It was lovely, and we recommend the picnic ground in Chaumussay, which has good picnic tables, a large shelter, a barbecue, recycling and rubbish bins and a secluded setting on the River Claise.

Cucumbers were handed out. Cucumbers are the new lettuces.

The picnic sounds great. I especially like the sound of your limoncello and blueberry cake!

The fougasse was excellent! Thanks to all for a super birthday picnic. Thanks too to the weather for a thoroughly pleasant afternoon. P.
P.S. cucumbers are Marketmore (slightly prickly) and Diva (smooth-skinned). Bread-and-butter pickle coming up!

Pauline forgot to mention....
we are still trying to keep up with the lettuce!
Thanks for Pauline's wonderful birthday picnic... what a great spread!!

Jean: the recipe is here (although I don't make it quite like this).

Pauline: I had some of the Diva for dinner last night -- very nice texture.

Tim: I'd take some lettuce if we needed it, but I can't keep up with our orchard neighbour's bountiful gifts of lettuce at the moment.

It is interesting how garbage is collected. I lived in Britain in 73-4 and at that time the garbage collector would open the garden gate, get the bin from where it was kept, take it to the street to empty it, take it back and close the gate! In Canada then, you had to take your poubelle to the street. Now here (in a remote area of Ontario) we can take plastic bags to the street for collection, but most people take their bags to a big bin as leaving them on the street attract bears!

I have visions of the Preuilly dustmen being featured in a sort of Dieux du Stade calendar....

Alain: Very interesting. In the early 70s in Australia we took our garbage out to the street in a bin(once we lived in town). If you had left it in bags it would have been spread all over the street by morning by somebodies dog or foxes or possums. The night soil man came in to the garden, got your can from the dunny down the back, replaced it with an empty one and went out again, in the very early morning. On the farm you had to deal with it all yourself however you saw fit (we had a septic tank and a bit of a gully that acted as a tip).

Fly: I think they did too. Mind you, it wouldn't surprise me if the Naked Garbo Calendar exists in France.

I didn't know the origin of the word poubelle. Thank you! It does actually mean the bin itself though despite the fact that people say "je sors les poubelles" even if they mean the rubbish bag. I think you'll find that both déchets and ordures ménagère are always used in the plural.
When my brother stayed with us many years ago and witnessed the large amounts of food that my very slim daughter could put away, he dubbed her "la belle poubelle", his French version of "garbage guts"!

Fraussie: yes, strictly speaking poubelle is just the bin, as that is what EP introduced to apartment blocks in the 19thC. Thanks for the note about ordures etc being plural -- I'll amend the post.

There is a restaurant in the US called Poubelle. I assume the owners know what it means, but a lot of the clientele just think it's a charming French word. Maybe it's for garbage guts! I hadn't thought of that before.

There are places in the UK where urban foxes are starting to be a bit of a nuisance around rubbish bags - but the same is true of bins, too. They're quite capable of knocking the lids off old-fashioned dustbins to have a rummage around, and I'm sure it's them that get into the street bins round here in search of the remains of people's takeaway burgers and kebabs, and leave all the detritus lying around.

Auty: Better foxes than bears I suppose, but a dashed nuisance all the same. In Australia it was usually someone's roving dog, which is even more irritating.