Claudette has arrived home after her 4 months with Jean-Louis J-L the Traction Doctor and his mate Michel the panel beater. We met Michel 5 weeks ago when we drove over in convoy with J-L's Traction and spent a morning deciding on the work to be done, and the methods to be used: door fit was discussed for quite some time because the back passenger side door only fitted where it touched - although it would lock, there was daylight still visible around the edges. We also discovered that her rust problem had been made worse because someone had tried to disguise it by covering it with fibreglass and respraying. 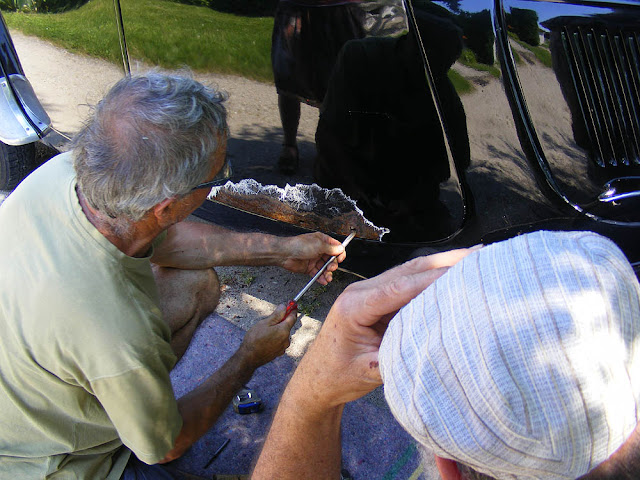 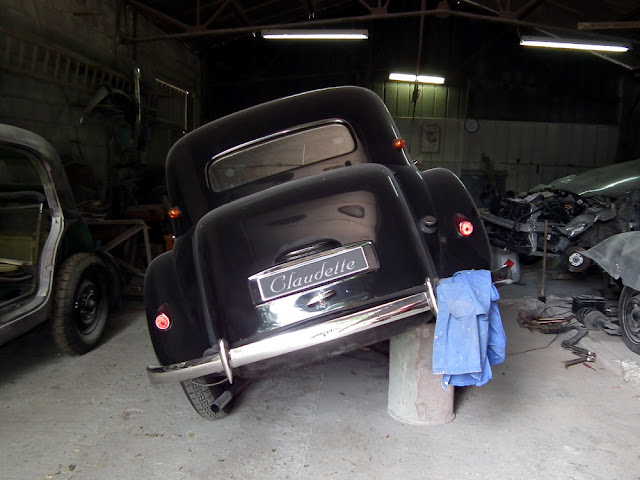 New sill and door bottom being made. 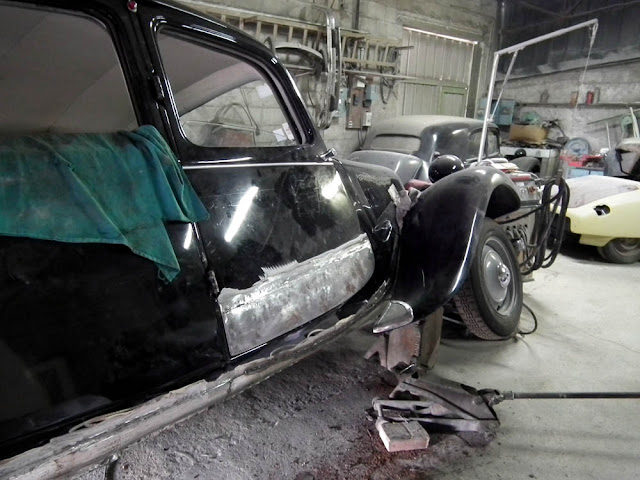 There are still several small things to do, such as add wing mirrors and remove some stains from the upholstery, but we are really happy with the results so far. Jean-Louis' work we already knew from past experience can't be beaten for getting your Traction in tip-top condition. We were super impressed by Michel's rust removal and re-hanging of the doors, which involved remaking the passenger side sill and the bottom of the front door, plus fixing some other smaller rust holes and paintwork to blend in with the existing black (There are apparently 5 shades of black that Citroën used over the years. Who knew?!). It's a magnificent job, once again by someone who knows Tractions well. 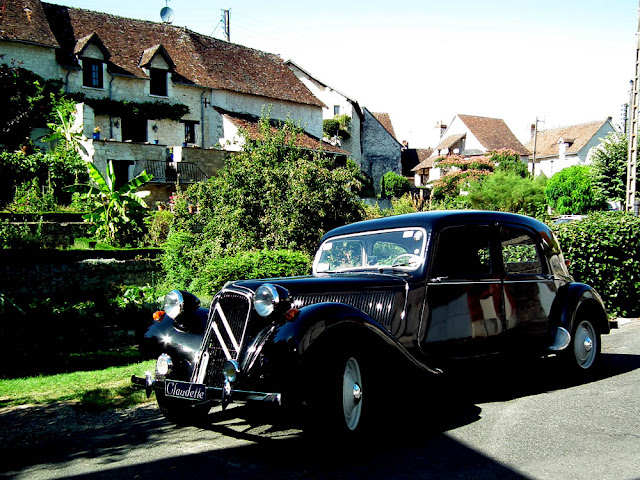 Yesterday morning Simon washed her and gave her a first coat of wax and I've vacuumed her carpets. To celebrate her arrival we took her out on a photoshoot, stopping off in Le Petit Pressigny to pick up our friends Tim and Gaynor. We timed it really well, as they had spent the morning nettle bashing and were exhausted. A nice relaxing run in the country in a classic car was just what they needed. 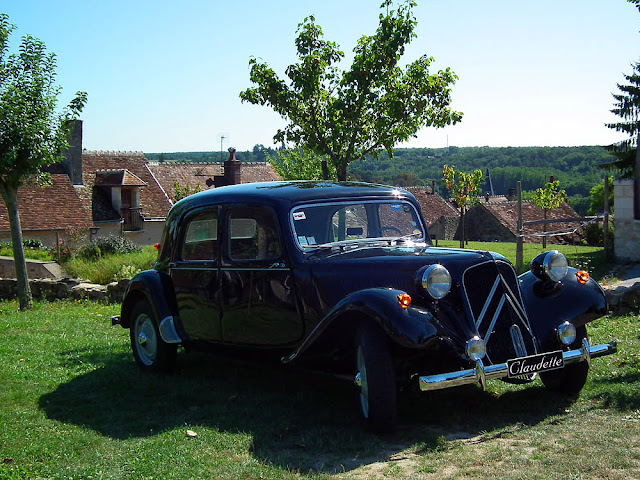 Our final challenge is to solve the brake drum problem. At the moment she is sporting a pair of brake drums that belong to J-L, because the new ones we bought are not properly round. So far the manufacturer and the supplier are not responding to customer complaints and we are not the only Traction owners in this position. My guess is that as there is only one manufacturer of Traction brake drums we will keep the ones we purchased and pay extra for someone we trust to re-machine them.
Posted by Susan at 09:00

Email ThisBlogThis!Share to TwitterShare to FacebookShare to Pinterest
Labels: la Guerche, le Grand Pressigny, The Car and Driving, Towns and Villages near Preuilly

Pay extra!
It will be worth it... because you will know!!

And if you are going to come past in something that bright, again...
please, please, please give me enough warning to put really good sunglasses on!!
I'm still seeing spots!!!

She does look lovely, tho, and boy does she moooooove!!
I think that is probably the only thing that saved my eyesight!!!!!!"

It was exactly what we needed! before you came we were feeling Very sorry for ourselves - nettle stings, bramble scraggs and heat stroke!

Thank you. We had a fantastic taste of a mimi Loire Travel Tour in Claudette. She was absolutely beautiful! The charming driver was masterful - isn't that what you said, Simon? Susan a mine of useful information, as usual. Claudette certainly aroused the interest of a few passers by who were delighted to find out more about her

Tim says to tell you that we were up at 7am this morning finishing the work along the bief. Just in case you're passing... ;0))

P.S. I really must learn to proof read my comments...

Gaynor: Sorry -- other direction this afternoon :-). Off to see the detailer in Chatellerault about cleaning her interior.

If you need a second driver when we are in the Loire late next year, I'm your man. I even have a beret.

Celestine and Claudette? One for you and one for Simon?