France is famous for its cheese, and quite a few French cheeses are distinctly aromatic. One of the stinkiest comes from the area between Deauville and Lisieux in Lower Normandy. Simon loves to tell people the story of us spending Christmas in the area and taking a block of the local Pont l'Eveque cheese home on Eurostar.

The other day he announced that the fridge smelled, as if there was stinky cheese in there, but he couldn't see the source of the aroma and was mystified. Eventually I remembered that I had bought a Petit Pont l'Eveque some days earlier. It was unopened, and hidden under something else, but after a few days in the fridge had completely stunk it out. We happily unwrapped it and ate it and the fridge problem disappeared. A clear win-win. 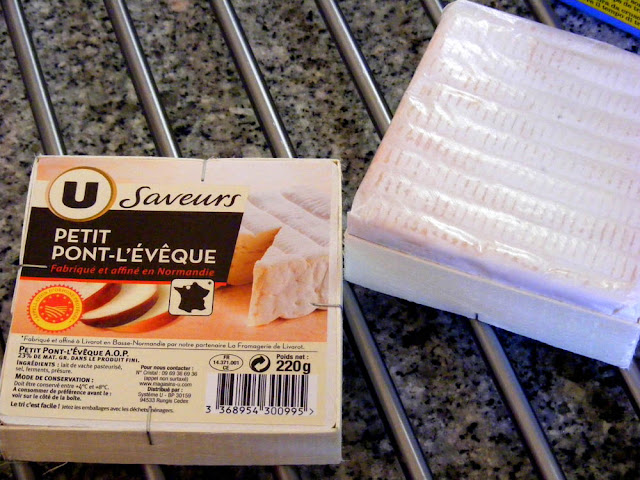 There is a very fine line between good stinky and bad stinky with cheese. Once the lactic aromas go over a certain level or develop in a certain way the cheese turns from being a delicious treat to something disgusting that turns the stomach. But the cut-off point between delicious and disgusting is different depending on where you were raised and what foods you have been exposed to.

The French anthropologist Claude Lévi-Strauss had quite a lot to say about this particular aspect of our approach to food and how our attitudes are culturally acquired. He points out that these distinctions are entirely learnt, and not instinctive or innate as one might think. He illustrates his point at one stage by relating how, in the days after D-Day, American troops would occasionally encounter fairly whiffy dairies in the Norman countryside. To the unsophisticated Americans, who had never been exposed to anything more challenging than processed cheddar, they assumed the dairies were full of dead bodies, and burnt them to the ground. They were revolted and wanted to eliminate the smell.
Posted by Susan at 09:00

Another case of shoot first and ask questions later by our American allies methinks ?!

oh how nice to discover some pont l'eveque...one of my favs....a friend just visited us here in western NC (where it continues to rain & rain) and brought 2 bags of assorted stinky cheeses & a bag of butter! couldn't have asked for a better gift.

I remember thinking, back in the early 1970s when I lived in Normandy, that Pont-l'Evêque was about the strongest cheese I could conceive of. Now I find it pretty mild (Walt likes P-E but not Camembert or Brie -- too strong). So I think it's the cheese that's changed over the years, not my sensibilities. It's true that if you let any of these cheeses really ripen, they get smelly (and often more tasty).

You'll have to get Jean Michel to tell you his cheese stories. I won't have the Norman cheeses in the fridge unless they are in a tupperware box!

Jean: no, I think just young and stressed.

Ken: we had some superb Brie de Melun, right on the edge of going over to bad stinky just recently.

Fraussie: is tupperware up to the job?

My French aunt never refrigerated any of her cheeses and said a Camembert wasn't good until it started crawling away (i.e. filled with maggots). There's a French song about going to war, the troops are various cheeses and the Pont-l'Evêque leads the way--clearly because it smells so strong any resistance will be dispersed!

Anton: LOL. I'll have to seek the lyrics out. You don't have a link do you?

The family used to bring Herve from Belgium when visiting us in France.

By the time they reached Paris the boys were accused of having removed their shoes and when they finally arrived - car windows open all the way - the smell had pervaded everything inside.

Here's a link to the words of that children's song about cheeses.

I agree with anybody who says soft, natural cheeses shouldn't really be kept in the refrigerator (except during spells of hot weather).

Fly: apparently the chemicals are the same.

Ken: thanks for the link.