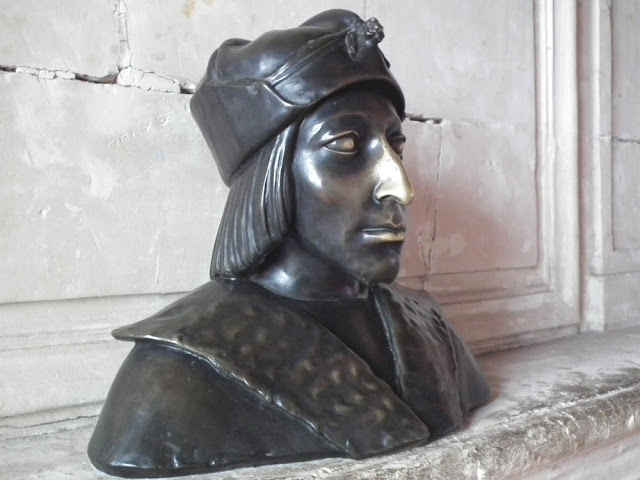 This handsome devil is the 27 year old Charles VIII of France. This bust sits on a mantelpiece in the Logis royal in Loches. It appears to be one of a number of versions that exist, and I have no idea where the original is (maybe Langeais chateau). Charles came to the throne as a young teenager, 13 years old. Because he was so young, and considered a perfectly pleasant, but not terribly bright young chap, his formidable sister Anne of France was initially appointed regent. (She was once described by their father Louis XI as 'the least foolish woman in France'.)

He might not have been as dim as everyone suggested however, as once he reached his majority he pulled off an audacious and advantageous marriage. At first he allied himself to the Holy Roman Emperor Maximilian I of Austria, by becoming betrothed to one of his daughters. But when Maximilian was married by proxy to the child duchess Anne of Brittany, Charles and his advisors knew they needed to act decisively if France was not going to end up as the ham in a sandwich formed by an independent Duchy of Brittany to the west and Austria to the east.

Charles laid siege to Rennes, and when Maximilian did not come to Anne's aid, Charles knew he had gained the upper hand. Escorted by troops to 'ensure her safety' Anne was 'persuaded' to come to Langeais castle, where she and Charles were married. The 14 year old Anne was not a happy bunny and famously brought two beds with her to Langeais for the wedding. Poor little Margaret of Austria can't have been a very happy bunny either, as she was left hanging around the French court for years before she was finally returned to her family.

The young king died the year the bust was made, after hitting his head on a door lintel in Amboise castle, apparently rushing to watch a game of tennis. The story goes that after the game he lapsed into a coma and died some hours later, presumably of a head injury. He and Anne had 4 children, but none lived beyond infancy. (The poor little mites are buried in Tours cathedral.) Anne's marriage contract obliged her to marry the next king if there were no surviving male children to take the throne, but since the next in line, Charles' cousin Louis of Orléans was already married she took the opportunity to scarper back to Brittany. (In the end she had to marry Louis, but that is perhaps a story for another day...)

Later in the day Simon's brother and sister-in-law arrived and he made a fougasse and barbecued a chicken marinated in his chillicherry sauce.
Posted by Susan at 09:00

"and with, apparently, a lucky nose

What a conk! That nose runs in the French royal family (ho ho). P.

A fascinating story.
We have done the tour of Langeais a couple of times and marvelled at the tableau and the story of the wedding, how she was transported by boat down the river in the dead of night in the middle of winter so the wedding could take place in secret.