It seems I'm not the only one who reads the local council minutes. I mentioned a few weeks ago a plan to trial traffic lights on rue Chaumont-Patin from September. Someone clearly doesn't think they are a good idea.


ERDF ('Electricity Grid of France') vehicles on their way to lunch approaching the pinch-point in rue Chaumont-Patin. 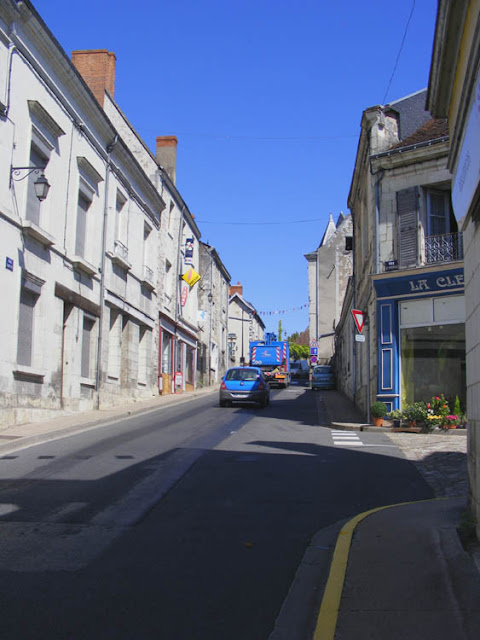 The problem is that there is a bottleneck where the former Eglise de Notre-Dame-des-Echelles sticks out at an angle, making the main road out of town narrow. Those going up the hill and leaving town have right of way, but if you are coming into town you have to enter the problem zone before you can actually see if anyone is coming, so those with right of way frequently end up giving way to people coming the other way, through no fault of theirs.

Probably what triggered this move to trial traffic lights was the destruction of a corner pillar at the old doctor's house by a truck trying to squeeze past about 12 months ago. Heavy vehicles use this road a lot, as it is the main road to Loches and Preuilly does not have a by-pass like many towns in the area because vehicles have to cross the river Claise. Crossing the bridge brings them right through the middle of town. Moves to reduce the parking on the Grande Rue have already been put in place, so the traffic lights are part of an ongoing plan to mitigate the traffic issues.


Someone in town doesn't want the traffic lights. 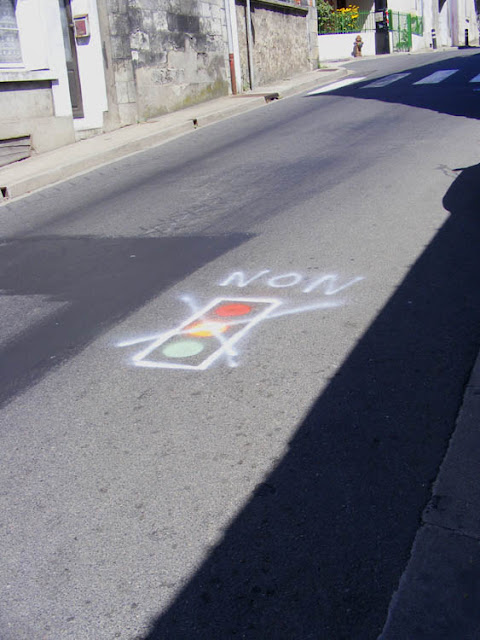 Personally I don't see how the traffic lights will work. I think they will cause traffic to back up and exacerbate the problem, plus it may result in a certain amount of rat-running.
Posted by Susan at 09:00

Does it actually get that busy? Interestingly they have put the traffic lights in Richelieu on constant flashing amber in order to speed up the traffic flow (Mainly stone trucks for the railway). Can't see TL's doing much for your bottleneck only make it worse! C

I far prefer to approach this point in either of the British rt-hand drive cars.... only because I get a little bit of extra warning!

The only people who seem to give way are the younger drivers who have probably been taught the difference....

Can't see TL's making any difference at all--like you, Susan we think the problem will just cascade further down and increase the number of jams.

The only solution is a one-way system such as we have in Le Grand-Pressigny, but it's hard to see how that could work due to the street layout in Preuilly.
We still have traffic jams here, when a delivery van stops at the Spa or florist, but otherwise very little traffic aggravation.

Tim: My observation is that drivers are very good at giving way in villages, but the problem at this particular point is that coming in you cannot see that you need to.

Antoinette: yes, and if there is traffic coming from both directions and wanting to turn up rue Chaumont-Patin at the bottom, you've got gridlock.

Jean: as you say, no practical way to arrange that in Preuilly.

There is an easy answer... but politically very "stinky"!

BAN anything over 3.5 tonnes from the centre of Preuilly...
[in fact all the small villages...
they would then have to find other routes]...
and create depots that can service the community in lorries that are of a size suited to the communities.

Yes... it would drive prices up... but it would creat more employment at the same time.

And the delivery vehicles could be electric or hybrid!!

Tim: yes, a good idea, but requires way too much political will. BTW, I am fascinated to note that the grafitti in the road has been painted out (sprayed with black paint).