The other day I was chatting with the owner of the little Vival supermarket in Preuilly. I happened to look up at the house opposite, and saw something I had never noticed before. There is a pair of scissors carved into the window lintel on the first floor!

This meant the house must have once been a tailor's or a dressmaker's, so I took some photos and consulted Roger Lezeau's notes on buildings in the town, published over several editions of Les Cahiers de la Poterne, the journal of the Société d'archaeologique de Preuilly (SAP). 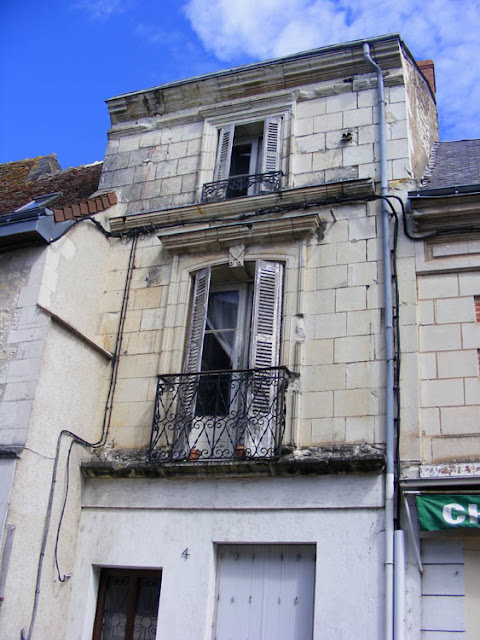 Roger says the house was the dressmakers Lieutard and his former apprentice Lucaire, but I am wondering if that is quite right. The house next door, according to Roger, was the millinery, fashion and haberdashery shop of Mesdames Ribotton and Lerat. The initials on the keystone are L and R, and I am wondering if he got the two buildings mixed up. 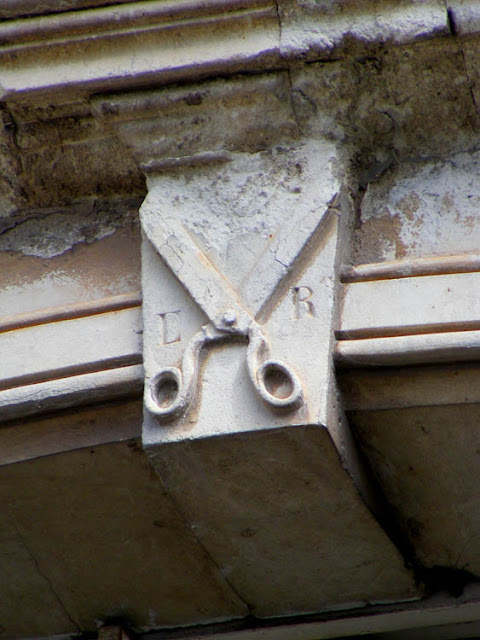 In the early 20th century there were at least 5 businesses in the fashion trade, 3 of them in a row in this small section of street, plus a tailor two streets away and another haberdasher across the road. Now there is just one, a dressmaker, in a building only a few steps away from the original dressmaker's establishment.

To practice your French comprehension and learn the difference between a tailor (tailleur) and a dressmaker (couturier) check out this video, part of a series by TV5MONDE called Merci Professeur.

Also nice to see was a Common Goldenring Corduligaster boltonii dragonfly, whilst swimming at a friend's place. No photos, as I was in the swimming pool. (Catching a quick rest between laps, in case you are wondering how I saw it -- half a kilometre yesterday, which is a lot for me.)

The new Pentax WG-10 is waterproof to 20 metres....
get yourself one and then we'll see the pix of the bottom of the pool!!
Oh... and the dragonfly, too.

As an aside... my brother photographed a Clouded Yellow a couple of days ago...
hardly ever seen in Breckland [let alone Norfolk]...
and we have a much greater number than I've ever seen before...
I was wondering if they'd had a
much more successful year than the weather seemed to indicate and have been able to push much further north?

My grandmother was a dressmaker - a very skilled trade in the first half of the 20th century before mass production took over. P.

Tim: the Clouded Yellows don't seem to be unusually abundant to me, but I am seeing more pale ones (by which I mean Berger's and C. crocea f. helice, not Pale Clouded Yellow's, which are not actually very pale.) Berger's Clouded Yellow in particular is much more abundant this year. Luc will do a report shortly, so that will tell us what the situation France wide is.

William: I know. I wondered if it was a 'C' for a moment, then I realised that what looks like the top of a 'C'is just a fault in the stone. The serif top left tells you it's an 'L', not a 'C'. When you see it for real it is obviously an 'L', but the photo has picked up details you don't notice when you look at the building itself.

neat. the trade carved into stone and into generations.