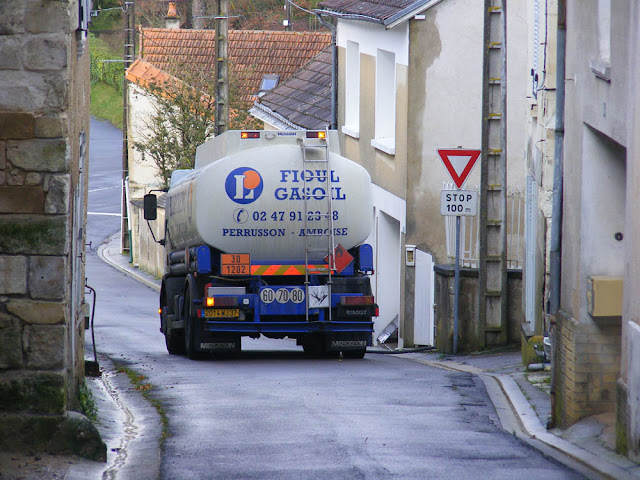 I came home from the baker's not so long ago, to discover that both the top and the bottom of the street were blocked by tankers delivering heating oil. 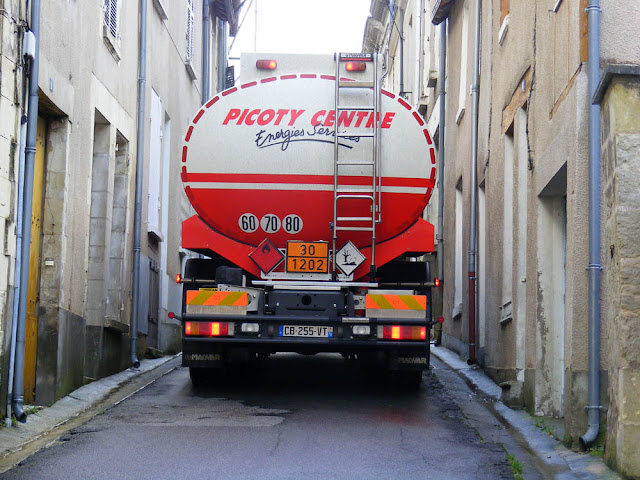 ------------------------------------------------------------------
Vandalism: I'm saddened to tell you that yesterday I went up to the gendarmerie to report that our car (the Scenic, not Célestine) has been vandalised. We normally park the car on our front courtyard, which is open to the street. Someone has taken a key or similar to the back door and scratched a big X and some squiggly random marks. The police were sympathetic and took all the details and some photos, asked sensible questions and said they would be in touch if they had any further information. They said no one else had reported anything similar, so hopefully this is an isolated incident. In Paris this sort of thing is commonplace according to a friend I ran into in the market place on my way home. I don't suppose people even report it there, but here in Preuilly, I felt it was worth making the effort to inform the police. I think the crime rate is slowly going up, with bored drunk youngsters beginning to make their presence felt, and there has been a spate of burglaries reported in the paper lately too.

Sorry to hear about your vandalism...
it was so common in our part of Leeds, that we rented a couple of garages, at the back of some flats, for the 2CVs.
We also started parking our big cars there too... first the CX, then the Merc... but that didn't stop the Merc getting its badge nicked!

There used to be spates of wing mirror breaking, windscreen wiper bending and similar mindless acts... then it would all stop for a few months... then another wave of vandalism.

Quite often it seemed to be associated with when a new tranche of "stoodents" entered the area... often with nice, newly aquired transport... so we put a lot of it down to some of the local "have-nots" feeling jealous.

Sorry to hear about the vandalism. One day in 2011 we came back to find our car scratched in Loches [in daylight]. It's a such a mean-minded petty act.

We've had a spate of robberies and thefts in the Charente recently; it doesn't bode well. I had my car scratched in England. It's incredibly frustrating

This happened to us many years ago, while the car was parked in town one evening. It's a horrible feeling to come back to it and find it like that.

The thing that saddens me most is that you don't expect it to happen in a place like Preuilly. Which just goes to show that nasty people are everywhere, sadly.

It happened to us...and others...in a supermarket car park some years back.
Not what we expected in the country...but it was an indication that times were changing...as indeed they were.

Bad luck Susan. Your car was probably in the right place at the wrong time, when some lout with nothing better to do and a mean streak decided to pick on your car.

It is frustrating not to mention costly. It's a good job Celestine is locked away.

That is too bad and it hurt to hear that even in this sweet area of France, those nasty events can happen. There are so many thefts in the city I live in (Manhattan Beach), that our community is very involved in crime prevention and we have a very pro-active neighborhood watch. I am the "block captain" for my block and have learned a lot. (The economy, unemployment, jealousy hasn't helped of course and are the root of the problem).