Yesterday we went to the funeral of Roger Lezeau. We first met Roger when he was already in his 90s. He wrote to us when we bought our house here, as he was the founder of the local history society (le Société Archaeologique de Preuilly), and had information he hoped we would be interested in. To some extent it was a ploy to encourage visitors, as he invited us to come and see him at his room in the maison de retraite. He could no longer go out and about, so people had to come to him. He was well known and well liked in the town, but in the last few years, as his deafness got worse, talking to him became increasingly difficult, and ultimately impossible. The last time I visited we exchanged notes, rather than spoke. His son Michel commented on how much of a problem it became too. He lives in Normandy, a very difficult situation if you can't just pick up the phone to chat with your father.


Roger Lezeau, photographed when we visited him several years ago. 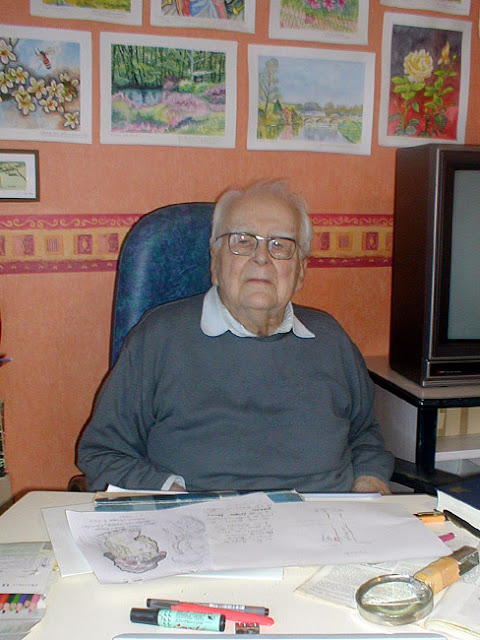 Although Roger had celebrated his centenary last year, and would have turned 101 in just a couple of weeks time, he admitted to me several years ago that he was 'ready to go'. By this time unable to walk, with failing eyesight and hearing, he was bored. All the things he was passionate about -- historical research, drawing and painting, receiving visitors and chatting, were becoming impossible. There wasn't much he could do except watch television.

The officiating priest spoke well about his old friend of 40 years standing, followed by his son Michel and our friend Bernard, the current president of the Société Archaeologique de Preuilly.  As always, the obituaries and eulogies revealed snippets that we hadn't known about the man, for example, that he had been an active member of the Resistance during the Second World War. He had grown up in Preuilly, but was a young man with a young family, living in Paris at the outbreak of World War II. They fled south, to his grandparents' house on the market place here in Preuilly, and he continued his profession as a hairdresser, whilst secretly acting as a courrier for the Resistance. When the war ended, the family stayed, and at one stage he was a member of the local council. But once he was unable to look after himself and moved into the nursing home, the family property was put on the market. It was sold only a couple of months ago.

The other interesting thing we learnt is that Psalm 23 'The Lord is my shepherd' is sung completely differently in France. Not only is it a different tune, but a different style, more like a chant and reply. I only recognised it because the words are an exact translation. We didn't have a hymn book, but I heard the opening line 'le seigneur est mon berger' and realised where we were going. Simon, who misheard initially, spent a couple verses wondering why the Lord was a Belgian.
Posted by Susan at 09:00

Simon didn't miss hear that opening line...
The Lord is a Belgian because "BEER&CHOCOLATE" is religion there!!

What a wonderful man to have known... at almost 101, his son can't be a spring chicken either.

Thank the Gods for people like Roger Lezeau... it is only people like him who have retained a local peoples' interest in their surroundings... he sounds, from your post, that he was mentally as sharp as when he founded the society... as such, the boredom that was brought on by the increasing restriction in what he could still do, must have been terrible.
I'd hate it!!

You were fortunate to have met him, I think.

Tim: Roger was a real sweetie.

he sounds a really interesting person to have known.

Are those pictures on the wall behind him drawings of his own? I ask because they look rather wonderful... especially the bee & blossom and the "Peace" rose... and he was drawing when you took that picture.

I'll bet he was interested to still be part of how Preuilly was changing. Also great they you were interested enough to visit him to find out more about the town and community you have become so much a part of. Hope his final passing was a peaceful one.

A very fitting tribute to a friend.

People like your friend are absolute treasures...you know them and everyone knows you through them.

And I can confirm that the Lord is Belgian.
My Belgian husband says so.

How sad but what an extraordinary gentleman who had a very long, meaningful life!

Tim: yes, they are Roger's own work.

Gaynor: his continued involvement with the Société Archaeologique was very important for him.

Fly: I thought your husband might be of that opinion :-)

Nadege: sad in a way, but I am sure he was glad to go.