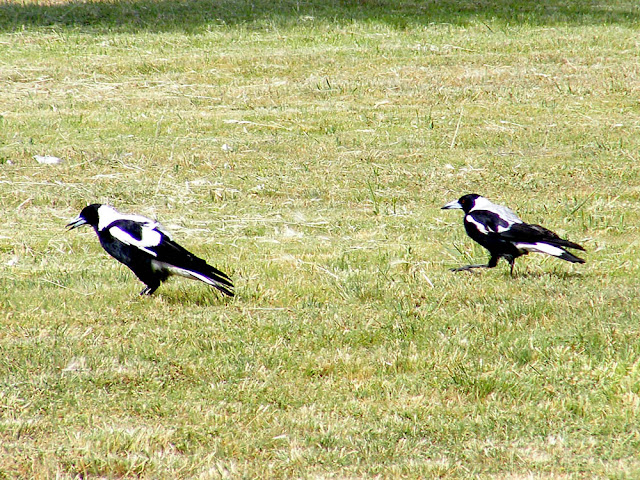 Maggies walking across a lawn, listening for grubs to pounce on.

The Australian Magpie Gymnorhina tibicen is an instantly recognisable feature of the landscape just about wherever you are in the country. Unlike the Eurasian Magpie Pica pica, which is a member of the crow family Corvidae, Australian Magpies belong to a family of large shrike or crow like birds called the Cracticidae, which are restricted to Australasia. They are highly intelligent birds, perhaps as clever as dogs, and are just as happy to live in proximity to man as in the outback or the bush. 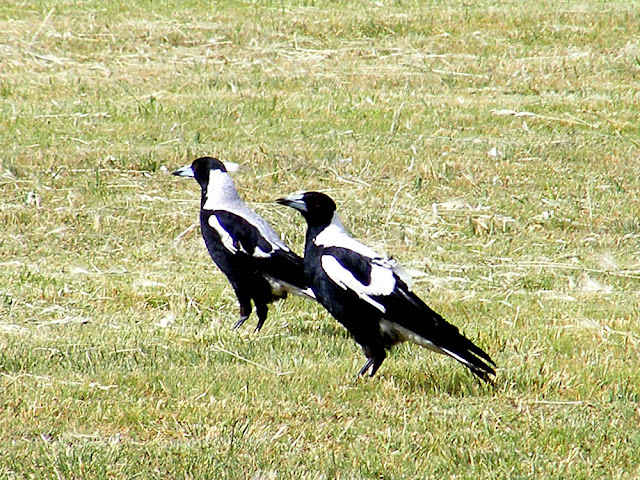 Their warbling and carolling (and the persistent nagging call of young begging for food) is unmistakeable. I've no doubt it is a sound unique to Australia that is much missed by many expats. What they won't miss is the occasional male Magpie whose testosterone rages out of control, causing him to attack pedestrians and cyclists within 100 m of the nest. Whenever one of these rogues moves in to the neighbourhood, walkers are well advised to wear hats with fake eyes painted on them and cyclists need to attach cable tie spikes to their helmets like this if they are to avoid being violently dive bombed and pecked. It's enough to make a kid take the extra long way round to and from school, I can tell you. Ian Fraser, over on Talking Naturally, points out that this strong black and white coloration often indicates a creature is agressive. 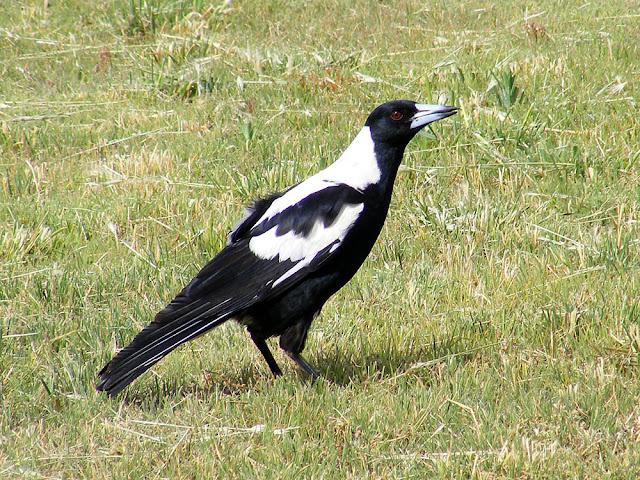 PS: When I was searching for recordings of magpies calling I came across some birdsong ringtones for mobile phones -- I am so tempted to get the maggie one!
Posted by Susan at 09:00

Odd that you should blog about Magpies... we saw our first here this year [in fact all winter] only yesterday... a flight of six. Normally there are a couple around all the time..

I love the Xeno-Canto site... there are a lot of "strange" calls from around the world on there.

Ringtones?... we wake up to the sounds of a couple of Nightingales that are on my phone... very pleasant... and I downloaded one for the Archos that is just a single Nightingale... very well recorded too.

I've just done a longgg reply to your "blackthorn" comment on Walt's post for today... great Japanese picture that, isn't it.

You might have a couple of nestboxes by the end of next week... busy with field work at the mo'.

Do they steal small shiny objects
and hide them in their nests? Our
mockingbirds use that same diving
technique. Smaller birds, but it
still gives one a start!

Sheila: no, but male Bowerbirds of several species collect objects and decorate their bower to attract females.

Lucie: Magpies would indeed be very interested in what fell under the picnic table! Bellbirds are lovely, but have a much smaller distribution range. I've never lived anywhere that there are bellbirds, but I've enjoyed them in places I've visited. Magpies live just about everywhere that people do in Australia.

Tim: the blackthorn / wild plum thing is interesting. They seem to be extremely similar in habit, and only timing and looking at them closely could distinguish them.

Yes, I hadn't really noticed until last year... but Pauline spotted the earliest was "Pickle's Mirabelle" root stock and we did some looking.
Pauline via the internet... me via the hand lens.
I'll gather visual data this year and do a blog on it.

I mowed one flat, deliberately, over by the 'gages... it was a sucker from their root stock.
But I've photos of that when it did flower.