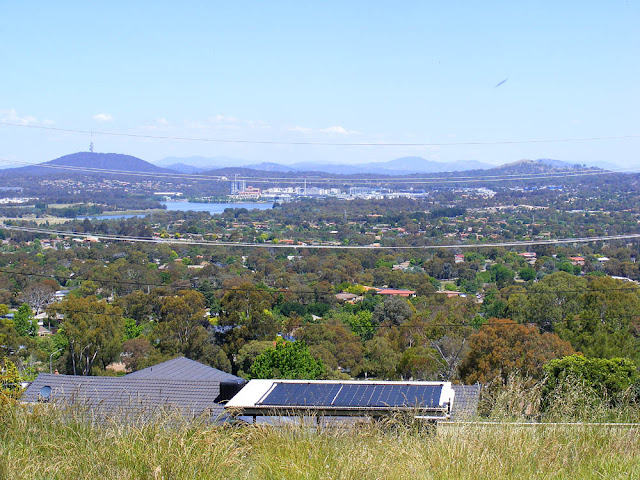 You can see why Canberra is sometimes dubbed the Bush Capital, in this view taken from Melba looking towards Belconnen. On the shore of Lake Ginninderra you can see the big buildings of the Westfield Belconnen shopping centre, as well as some government offices. In between them and the camera are suburbs dominated by the many gum trees in parks and private gardens. Over on the far left is Black Mountain, with its telecommunications tower just visible, and the Brindabella Mountains National Park in the distance.

*********************************************
Weather Update: Yesterday was freeeeeeezing! It wasn't actually all that cold, but we had been away with clients for a couple of days, so the house wasn't as warm as it could have been, and outside was just miserable. All around us people were reporting snow! We are sitting under the edge of a gigantic Atlantic storm which stretches from Newfoundland to Portugal, and the Caribbean to Greenland, sucking cold air down from the Arctic regions over us. Brrrr.
***************************************************
Car Key Update: In an attempt to locate my Renault key I have revisited the restaurant we had lunch in on the Friday, popped into the police station just next door to it and asked at the town hall just down the road in Saint Pierre des Corps. Nobody had handed it in, but the ladies at reception in the town hall were lovely. Jean-Louis asked the organisers of Saturday's car show if anyone had handed it in there, but no one had. He suggested I contact the town hall in Chatellerault to check there, which I did by email and got no response. Not giving up though, I also emailed the town hall in Montlouis, where as you know from yesterday's blog post, we spent some time. Within about an hour a woman from the Montlouis town hall rang me to say someone has handed in my key to the municipal police there. I had described where I might have lost the key and what it was attached to, so she is sure it is my key. She asked me if I was going to be in Montlouis in the next few days. As I was not planning to be, she has offered to courrier the key to me (but because of Easter it will be sometime next week when it arrives). What an absolute star! and many grateful thanks to the anonymous person who found it and took the trouble of handing it in. I suspect it was one of the council parks and gardens staff.
Posted by Susan at 09:00

SO nice you got your car key back :-) Three cheers for the ladies at Montlouis!

Great news about the key and the helpful staff at Montlouis.

Glad about the found key. What a lot of hassle. But it seems to have worked out, and that's good.

Wish I could figure out why that comment posted twice.

Great news over the key...
and wonderful service from the people in Montlouis...
We know why Ken's message posted twice...
he was shivering in this "nithering" weather.
Have a Happy Easter,
T&P

Ken: a lot less hassle (and expense) than having to get a new one. I'll delete your duplicate comment.

It's very rare to lose anything in France..I had faith that you would be reconnected with it! I have many a story of Lost and Found in France. Well done!

That's a relief about the key. Good tracking!