The Loire at Montlouis

Recently we needed to visit the Notaire (notary or government solicitor) at Montlouis. We were looking for a garage to rent near Saint Pierre des Corps, so the 'old ladies' don't have to put in so many kilometres. The Notaire at Montlouis was advertising one that seemed ideal, but we were slightly too early and they would not have reopened the office after lunch quite yet. So we sat on a bench and watched life on the Loire for 10 minutes.

A sandbank mid stream, with cormorants and gulls. 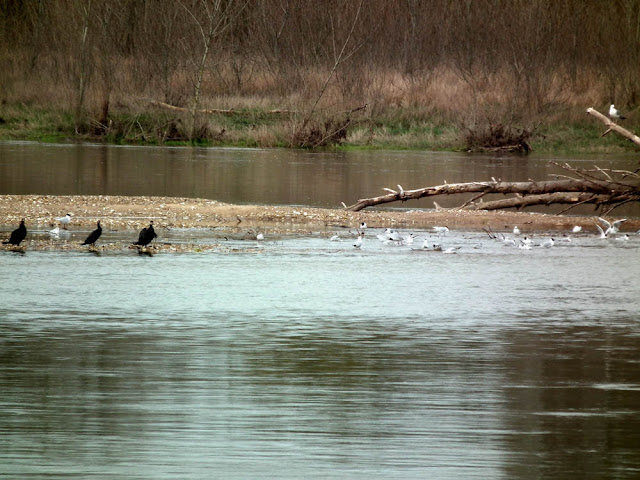 The river landscape is created by the flooding and flow of the water. Numerous sandbanks and islands are formed mid stream, each having an assemblage of plants and animals that benefit by being protected and are often rare elsewhere.


Gulls gather around some driftwood at the tip of a sandbank. 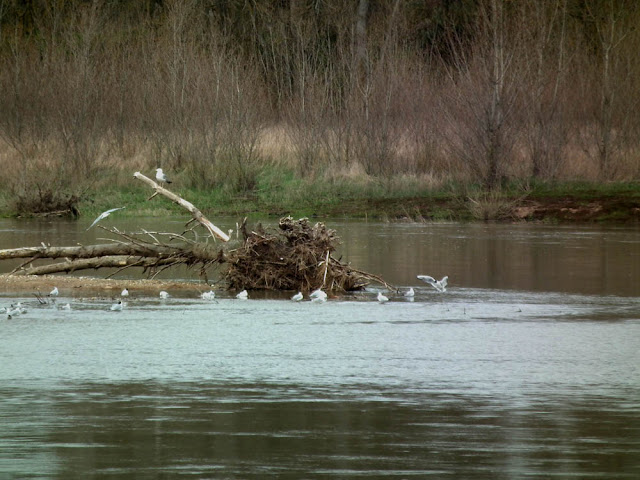 In the spring and early summer, certain species of birds nest on the sandbanks. Often the nest is just a small shallow depression in the sand, and they are subject to several possible disturbances (flood, human activity, predators). Consequently, the Ligue pour la Protection des Oiseaux (LPO) has been invited to manage the islands and sandbanks, and has erected signs saying you are not allowed to disembark onto them between 1 April and 15 August. You are also not allowed to get closer than 30 m to the birds, to prevent them being disturbed.

The LPO and the local authority are proud of the fact that so many birds choose this place to nest, pointing out that it is a sign that the water quality is good and the river ecology is healthy.


Looking across the river to the opposite bank. 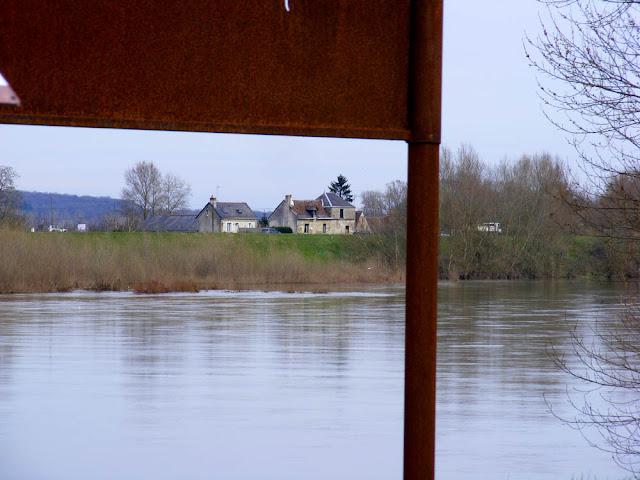 The terns and the plover are migratory, arriving from Africa in the spring and returning there after the nesting season in August. These Loire river sandbanks are the only place in France that the Little Tern nests. The Mediterranean Gull is also very rare in France.
Posted by Susan at 09:00

Got to correct your taxo..namey thar Susan... no such thing as a Black-headed Gull... they are Chocolate-headed Land Gulls (Larus cocoaheadus) Mouette voixtresfort... and they are damned annoying if you are sitting in a hide trying to watch real birds!!

Looks as though the weather is trying to make the Easter visitors feel "at home"... does it not?

Tim: LOL, I know what you mean re the gulls!

Apparently there are flurries of snow up near Richelieu!

Yes Susan & Tim I can confirm that the Brits that have come down for Easter have brought the snow with them... It was snowing when we went shopping this morning.

Due to our going-on-four-year
drought, our river is almost a
total sand/mud bar. Btw, front
page article in nytimes.com today
about bee colony collapse here in
U.S.

We started with Snow, which rapidly became "Snizzle"... then rain, back to sleet... more SNOW... and currently... "Mizzle"!
Madame in the Spar said it was very bad at St Maure...
However, my brother took this picture at Easter five years ago!!

Did you see the episode of "les raciens et les ailes" shown in France in December ( January on TV5 Monde) on the Loire?

They talked about the fauna and flora .

Sheila: I read the NYT article. The usual media mix of apiarist anecdote, misunderstandings of the science and a few actual facts. What comes across loud and clear to me is that in the US, BigAg has made itself dependent on vast numbers of alien Honey bees, which have pushed out the native bees that could do all the pollinating required, if only they were still there and their habitat was still there in sufficient area. I don't entirely buy the neonic link to CCD either -- there are too many exceptions around the world. It seems more likely it is related to a combination of mites, viruses and fungal diseases, with pesticides not helping, but not the root cause.

Tim: we didn't get any snow! Only drizzle.

Beaver: no I didn't see it. I'll download it and watch it -- I really like that show. Thanks for alerting me to that particular episode.