The Boyz are Back in Town

Last Thursday the male European Orchard Bees Osmia cornuta emerged as adults from their nest holes in our back door. These jet black bees, about the size of a Honey Bee Apis mellifera, and with foxy red fur on the abdomen and a tuft of white on their faces, are an incontrovertible sign of spring*. The males emerge a few days before the females, and use the time lag to establish territories. Cleverly, this one is staking out one of the drainage holes in our back door. It won't the one he emerged from himself, but more likely, he came from another group of holes nearby, the work of a different individual bee. He is checking for the scent of a female almost ready to pop her head out into the light. The hole is open, so a male has hatched from here, but there may still be unhatched bees in there. 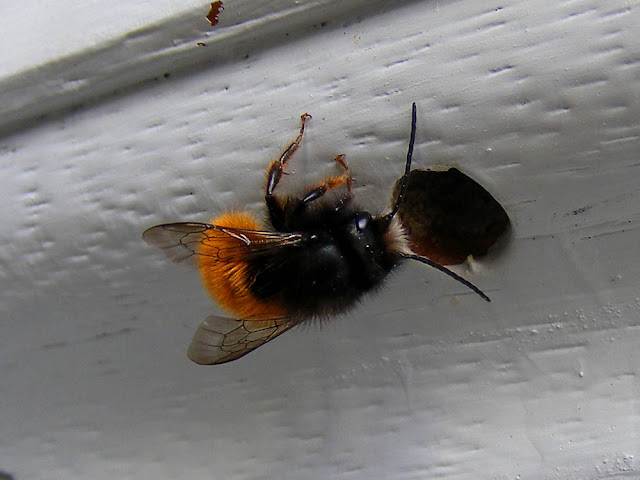 It is this species and their many wild cousins such as some of the mining bees Andrena spp, along with the bigger bumble bees Bombus spp and Violet Carpenter Bees Xylocopa violacea, also emerging in the early spring, who will do the bulk of the pollination of our orchard and potager. Honey bees will probably only be responsible for about 10% of the fruit we get, and none of the vegetables. Even in industrial situations, such as the almond tree monocultures in California, the thousands of specially trucked in Honey Bees may only pollinate about about 30% of the crop. The rest is done by wild bees, which receive next to no encouragement to frequent these factory orchards.

This relatively low pollination rate is not because Honey Bees are threatened with extinction. It is because they actually aren't all that good at pollinating. Wild bees do it better, for a wider range of plants. In the days when the European policy makers are discussing whether or not to ban neonicotinoid insecticides either wholly or partially (just for crops attractive to bees), it is worth remembering that Honey Bees are not the only creature engaged in taking pollen from one flower to another resulting in fertilization and fruit production.

There is good evidence to suggest that neonicotinoids are bad news for Honey bees and Bumble Bees even in sub-lethal doses, but the scientists who dare to write about the fact that Honey Bee numbers are increasing globally say they have received hate mail, and at best from some quarters, utter disbelief. They point out that in places outside Europe and North America, Honey Bees are thriving, and pollination world wide is also happening perfectly effectively, with global food production increasing year on year, including in countries where neonics have been routinely used for over a decade. Yet somehow the public has become convinced that the Honey Bee is going the way of the Polar Bear.

Which is not to say there isn't a problem. There is, but it is to do with wild bee populations declining because of habitat loss and in some cases, disease. Much of this is down to modern intensive farming methods, which of course includes pesticide use, but being poisoned by neonics or any other insecticide is probably the least of most bee species' worries in the long term. Some of the problem is down to a rather surprising modern phenomena too. The area of land covered by trees is increasing in Europe and the native bees are not forest species.

Here in France, our native bees, which include Honey Bees (unlike North America and Australia, where they are introduced) thrive best in open flower rich grasslands, with species rich hedges and some open woodland (which includes orchards). Locally, a series of dry springs over the last decade, resulting in reduced wildflowers cannot have helped. More widely, too much coniferous or broadleaf deciduous forest or too big an area of intensively cropped land with no fallow margins, and bees do not thrive.

All I can do is read all the science and keep up to date with the latest research. I can make sure our orchard is a haven, with unstrimmed boundaries and as many wildflower species as will take up residence in the grass along with the bees. I can install bee hotels for the mason bees, keep patches of bare earth for the mining bees and keep an eye on old vole holes which may contain bumble bee nests. I don't use pesticides, but I have to accept that my farmer neighbours usually do. Let's hope they are also good enough professionals to want to work to encourage their local bee populations by giving them space to breed and forage. Let's also hope the upcoming CAP reforms allow and encourage them to practice wildlife friendly farming.

*Another incontrovertable sign of spring is cowslips in flower, and we saw them on Saturday in the Brenne.
Posted by Susan at 09:00

You've been buzzy!
Or beeezy?
Nestboxes well underway...
all different sizes according to the available wood...
Enjoy the sunshine!!

Tim: are you accusing me of being a New Zealander?!

Another great post, Susan.
Count me among those convinced
about the demise of the honey
bees.

Sheila: the media in the US certainly gives Americans the impression that the Honey Bee is in big trouble. It's true that there is a very worrying problem in the States with farmed Honey Bees failing to survive the winters and generally being very susceptible to disease and parasites. But it's not a global problem (yet, at least) so the Honey Bee is in no danger of extinction, and due to the increase in beekeeping in China, South America and Africa, and healthy bees in Australia, globally, honey bee numbers are actually increasing.

Lucie: as a leading bee researcher said in an entomolist email today, we have good evidence that some species of bumble bees are declining (and some clues as to why), but for the bulk of wild bee species we know pathetically little, and the data is not easy to collect and accumulate.