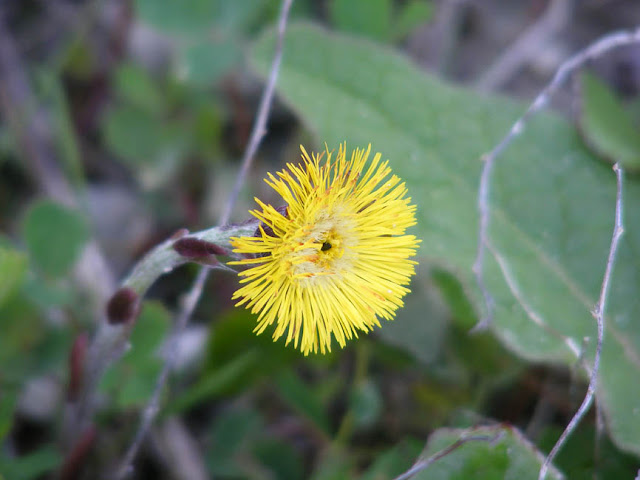 Coltsfoot Tussilago farfara is an odd plant, found in chalky waste ground. It flowers early in the year, before its lookalike cousin the dandelion. The leaves, which I assume were thought to resemble the shape of a colt's hoof print, don't appear until after the flowers. It is native to here and I encounter it every now and then around the Touraine in the spring but apparently it can be a real nuisance and very difficult to eradicate in countries where it has been introduced.


The leaf is the rather angular heart-shaped one centre left. 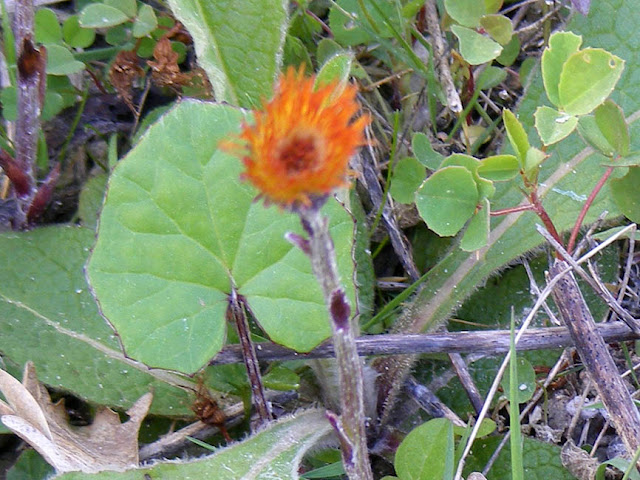 Its scientific name gives you a clue that it was once considered of medicinal use. Tussilago is from the Latin meaning 'acting on coughs'. The dried leaves and flowers were smoked or taken infused in a syrup to relieve coughs, including asthma. Unfortunately, in modern times it was discovered to also contain a toxin which if taken in sufficient quantity can lead to liver damage, so it has been a bit discredited as a medicine, with at least one European country banning its sale as a herbal remedy unless from a specific cultivar known not to contain the toxic substance.

I remember eating Coltsfoot rock in my childhood which is made in Oswaldtwistle, Lancashire from the extract... http://en.wikipedia.org/wiki/Coltsfoot_Rock

Nice picture... didn't know about the liver-damage connexion... but most herbal cough remedies I've come across... with the exception of sage concoctions... say "gargle and spit, rinse well". So anything you swallow after that is going to be more akin to those wierd "Bach Flower Remedies".

Nice etang entry... the Mayzon de la Nature etang de Cistude is currently drained... but not a damn wader in sight!! Just a pair of Stonechats... and a lot of activity at the Heronry could be seen from the new viewpoint... but at the main hide... SFA!
Annoying really... but made up for by more Black-necked Grebes than I've ever seen...
And four Black Kites at Foucault... one overflying the hide about three times.
For a "nitheringly" cold day, some nice views.
The new view point at the Mayzon has NO protection from the wind at all... the brand seems to be set to funnel wind through... or it was yesterday!!

Etang Purais was very good... but warmer outside the hide than in...
Ooo! It's getting brighter as I type... that's better.
Time for some tree planting...

Just seen C&Es comment... you are not showing properly on our sidebar, either... we are getting to you a day late!
Unless, as I did this morning, I deliberately click on the "Daze on the Clays" link... that always takes me to the latest... but the sidebar is showing "The Passion"...

Tim, C&E: I think this must just be one of those mysterious blogger things. I find blogs disappear occasionaly from the blogger reading list for no reason. I think they come back of their own accord. We seem to be showing up OK on your blogs now, but not sure if that is because you have done something your end.

Interesting about the coltsfoot rock -- I've never heard of that.

You are on our blog sidebar... but currently a day late... until well after lunchtime.
How come you could see you, on our sidebar, when it wasn't displaying "Coltsfoot" on ours until after four pm?
Wiiieerd!

Tim: It may be connected to the RSS feed -- I've noticed the email advice for a new post takes over 20 hours to be sent out.

For fans of Jean M. Auel's Earth's Children series, Coltsfoot is used by the heroine, Ayla, quite a bit and it was nice to see a picture of it!

Anton... nice to see Jean M. Auel mentioned... still to get "The Land of Painted Caves" in paperback... but is she going to re-write the earliest two books based on current research/knowledge? She hinted that she wanted to!!

Anton: it's so long since I read them, I don't remember the details.

ah, so that's what it is! I photographed this a couple years ago and didn't find it in my guide book.