A Botany Outing to Luzé

On 1 September l'Association de botanique et mycologie de Sainte-Maure-de-Touraine had an outing to some forest around Luzé. The original intent was to look at Autumn Lady's-tresses orchids Spiranthes spiralis, but with the hot dry weather* they have not emerged this year. Marc gave us a quick rundown on what to look out for, just in case there were some lurking in the grass, but we didn't see any. They wouldn't have been very easy to spot even if they had been there - only 15cm high at most, with tiny white flowers, growing amongst quite rank grass.

Small Spreadwing Lestes virens male. They are tiny
compared to the other spreadwing species. 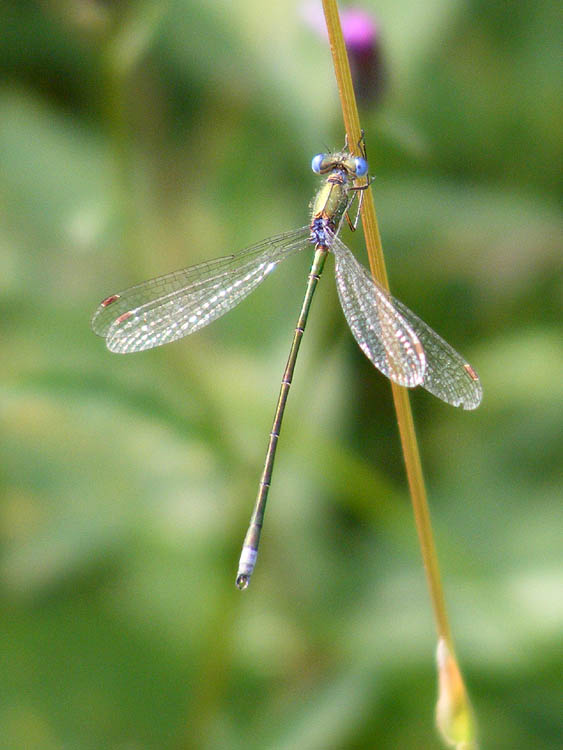 We met at the church in Luzé then moved to a site halfway between Luzé and Marigny-Marmande. It was a forested hunting reserve with plenty of Besom Heath Erica scoparia undergrowth and wide rides (allées in French) that we could botanise in. 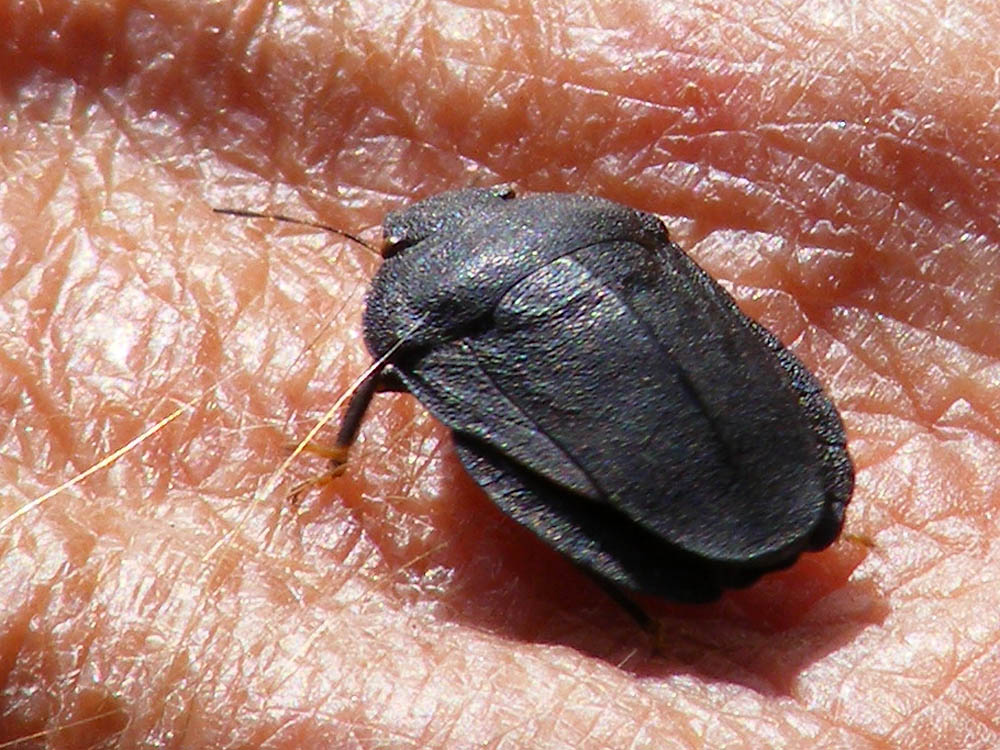 As it turned out, the botany was limited but challenging, with a selection of umbellifers which were not easy to sort out. Amongst the ubiquitous and easy to recognise Wild Carrot Carota daucus, there were numerous patches of Cambridge Milk-parsley Selinum carvifolia, Hog's-fennel Peucedanum officinale and French Hog's-fennel P. gallicum. I won't bore you with the details, because they are very difficult to photograph well and I am not sure I have correctly identified all my photos. Umbellifers (Apiaceae) are one of the groups I studied at university, and I love them, but you need quite a bit of practice with some of them to be confident of your identifications.

There was a nice selection of knapweed, thistle and related plants, including the lovely little Saw-wort Serratula tinctoria and Meadow Thistle Cirsium dissectum (known in French as la Cirse d'Angleterre - 'the English Thistle'). Both Saw-wort's scientific name and its French name, Serratule des teinturiers indicate that it was a source of dye, so it is interesting that the English name does not seem to reflect that. I really must unearth my copy of Flora Britannica from whatever box in the grainterie it is in... Common Knapweed was there, as it is everywhere in Europe. Here, I call it Centaurea jacea and leave it at that, but taxonomically it is endlessly argued over. It has a gazillion subspecies and varieties, and is the cause of international disagreements. For instance, in France, we have C. jacea subsp nigra amongst the list of many possibilities. In Britain, this same plant is known as C. nigra ie it is elevated to full species, and C. jacea does not occur. Me - I'm not gettin' involved...

Also in abundance the charming lavender buttons of Devil's-bit Scabious Succisa pratensis - another reason for unearthing Flora Britannica, the book that can answer these sorts of culturally related questions like why 'devil's-bit' ? (and it is the same in French - le Mors-du-diable). Along one of the rides was a little group of Alder Buckthorn Frangula alnus with small marble sized black fruits. In French Alder Buckthorn is called Bourdaine and you can sometimes buy a very strong dark honey that comes from the flowers of this plant. 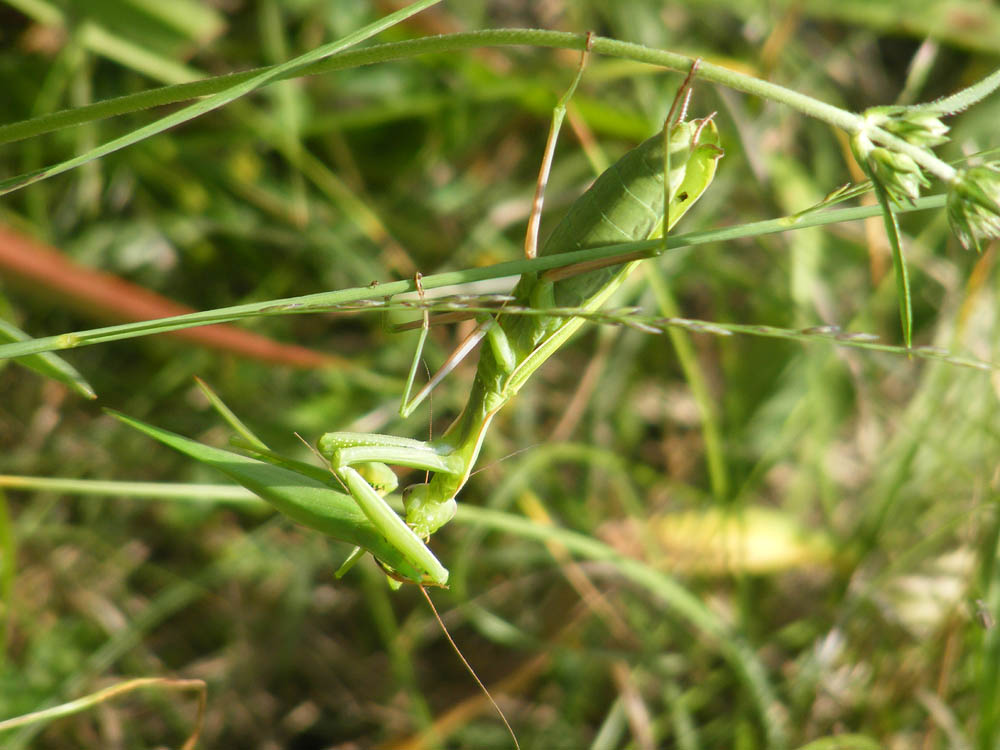 There was a nice range of insects to keep us entertained once we'd sorted out the major botanical challenges. Plenty of red and black Poplar Leaf Beetles Chrysomela populi, and two species of spreadwing damselflies (known in Britain as emerald damselflies). Praying mantises Mantis religiosa were everywhere down one of the rides and lots of Peacock Inachis io butterflies down another. 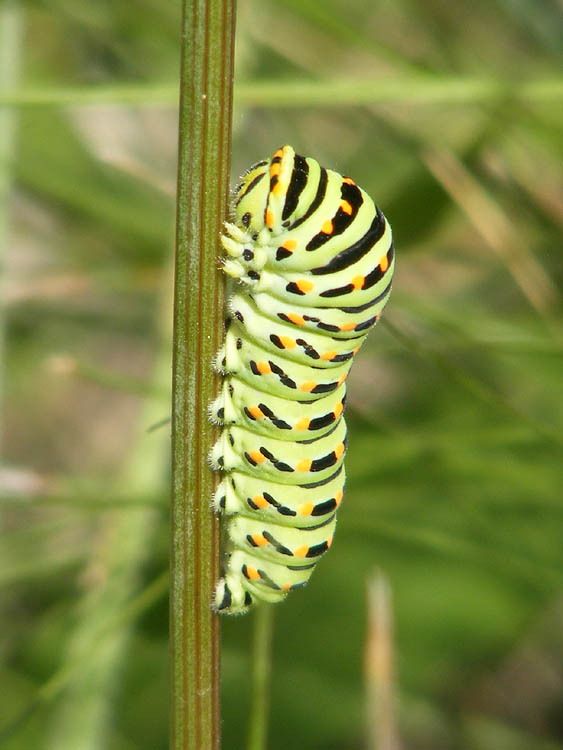 The best sight of all though was a Swallowtail caterpillar Papilio machaon, resting on a French Hog's-fennel stem. This will make all my British lep friends sick with envy, as there it is a very rare species, completely dependent on an equally rare umbellifer, Milk-parsley Peucedanum palustre. This is what happens when a species population falls to critically low numbers on the edge of its range - the genetic pool is so small that little quirks like only eating a single plant become much more significant. Here in France, Swallowtail caterpillars are not fussy - they will eat anything from garden carrots to fennel to any of the various Peucedanum spp and many other umbellifers besides. Milk-parsley isn't even an important food plant for them here, let alone the only one.

*We are on Level 3 water restrictions again along the Claise and Aigronne catchments, which of course, includes Preuilly. Level 3 is the highest level of restriction.

It sounds like it was a very productive day!

The swallowtail caterpillar is a lovely sight to see. Just wish there were more of them about! A lucky sighting indeed.