The Language of Lingerie

Lingerie (pronounced lë-zhree in French, with 'ë' representing a nasalised i) is a word that has been absorbed into English and the pronunciation modified (lon-zher-ay). Go to Forvo to hear native French speakers saying it. Lingerie in both languages means the same thing.

However, brassiere is a false friend. A brassière is what I would call a singlet, and I think only used in reference to baby clothes here. French bras are called soutiens-gorge ('throat supports'!). They don't have cups, but bonnets ('bonnets'). French sizing, however, is a perfectly sensible system - centimetres around the body just under the breast, ie your band measurement, not some randomly assigned number, and cup sizes are indicated by letters of the alphabet, A being the smallest volume. 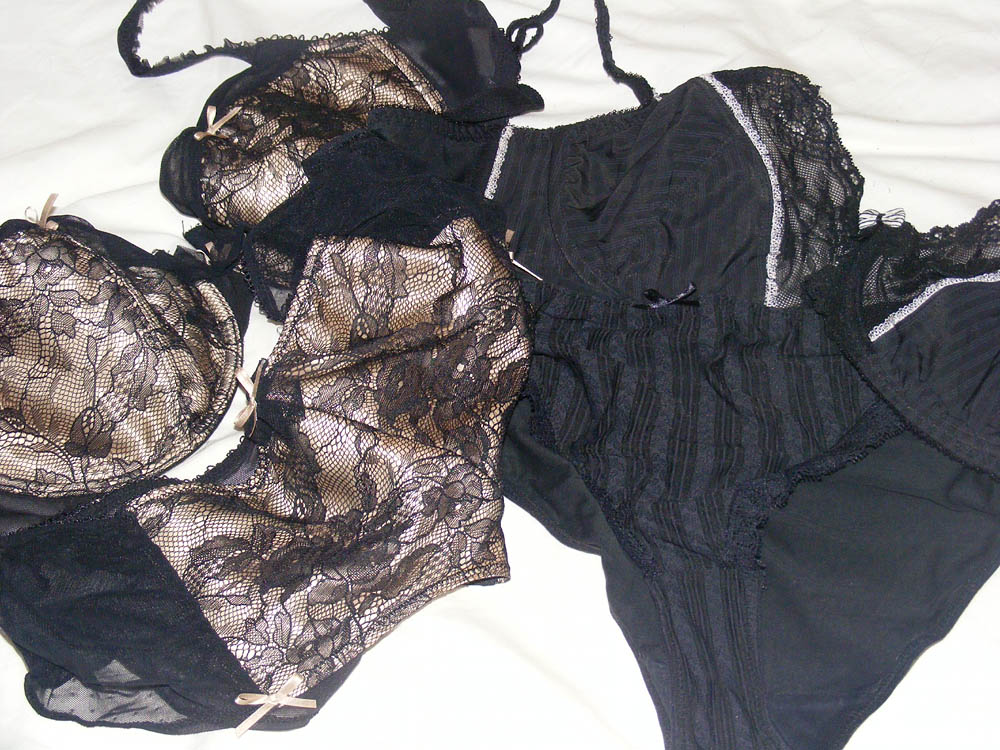 Women's underpants are usually les slips (bikini briefs), les boxers or les shortys (boyleg briefs) and les culottes (full briefs). Interestingly, I notice that UK and Australian underwear retailers no longer bother to mention cotton lined crotch gussets - it is presumably now a given. Yet French retailers often feel it desirable to list fond doublé coton ('doubled cotton bottom') in the description of a pair of underpants. French sizes for underpants are a randomly assigned number, that do not bear any sensible relationship to your actual measurement.

*Push-up bras are often referred to as les balconnets in France (for the technicalities see this post from The Stage Door, in French). They give you a noticeable décolleté (cleavage). My understanding is that the English decolletage, meaning cleavage, is a false friend. The French word décolletage isn't used much and when it is, only refers to a deep or wide neckline of a garment, and not directly to the view it affords of the body beneath. Ken may be able to clarify.
Posted by Susan at 09:00

So many French bras on sale in the supermarkets have "armatures" i.e. lengths of wire that wear holes in the fabric and stick in you! At least when it comes to knickers, Sloggis are widely available, with international sizes on the packs.

Actually, French bra sizing is different from the rest of Europe and is not in fact as you describe: while we use the underbust as the band measurement, the French use the actual bust measurement, so that my fairly reasonable 85C (38C UK) everywhere else becomes an elephantine 100C when I get to France, as if I didn't already feel huge next to the petite French ladies!

I'm not an expert on women's undergarments! But the plural of un soutien-gorge seems to be either des soutiens-gorge with a final S on soutiens or just des soutien-gorge, with no final S's. Every woman has just one gorge, but deux seins.

I don't really understand the difference between décolletage and décolleté in French, except as you say the first term is more technical having to do with dress design or sewing.

Walt and I are not really into drag!

I think I'll stay out of this debate.

When I last was in M&S in England and I requested my bra size, I was directed to the children's department.....

And it certainly wasn't because of my youthful looks!!!

PG: Auchan sells soft cotton bras with no underwire for 5€. I haven't had a wire poke out or distort in the washing machine for years - clearly they have got better. Theoretically, if the wires dig into you, you are wearing the wrong size...I tried Sloggis when they first appeared on the market and didn't like them. My mother wears them, but I've never retried them.

MelD: Thanks for the correction. I am an 'elephantine' 100C btw, and have been for the past 10 years at least. I don't think 100C correlates to 38C though, as presumably the 38 is inches (more like 95C). I guess that also means that the UK system is even weirder, with the metric size referring to band size and the imperial to full bust. No wonder I'm confused - and the Australian system is different again (a properly random number).

Ken: thanks for the soutien-gorge correction - I didn't even think about it. Disappointed not to get your words of wisdom on decolletage though :-))

Elizabeth: Read the French article I linked to - maybe you are a candidate for a balconnet :-) Otherwise, it's off to Auchan for you too...

Thx for the backlink :) I'm glad my post helps, actually I think I've leraned some things while writing it...

(and yeah, plural of soutien-gorge is soutienS-gorge - one of the weirdness of French langage...)