Fouaces, or fouasses, often called fouées (to the west) or fougasses (to the south), are the local Touraine version of pita bread or foccaccia, that is to say, they are a small soft stuffed flat bread. Medieval in origin, they were originally made at either the beginning or the end of a baking session, when the big brick wood fired boulangerie ovens were either heating up or cooling down. If baked at the beginning of a session, they allowed the baker to judge the temperature of the oven. Generally they are cut open and stuffed with rillettes, to be eaten while still warm.

The reknowned gourmande Rabelais (a local boy) describes them as being made from water, egg yolks, saffron and spices (which I guess is why they are available as takeaways at the Foire au Safran in Preuilly). I decided to try my hand at making them, but none of the recipes I found looked terribly authentic, or they were for a sweet version more like brioche. Therefore, I decided to create my own not terribly authentic recipe, as that seemed to be the tradition, with every family having their own variation. 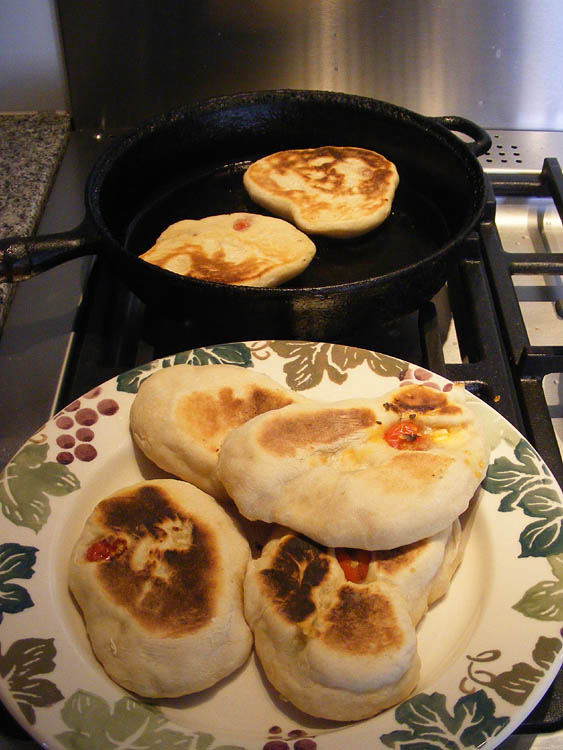 For Stuffing Option 1
6 slow roasted tomato halves
3 slices from a goat cheese log, cut into semi-circles (I used Sainte-Maure-de-Touraine, purchased from my mobile laitiere)
(or you can use Délice de tomates from a jar you bought in the supermarket and some cheese)

For Stuffing Option 2
1/2 an aubergine, cut lengthways.
1/2 tsp ras al hanout
(or you can use baba ganoush if you've got some lurking in the fridge you want to use up)
Method:
Susan

*for instructions on how to make a sourdough starter see here. Alternatively, if you have been given a Herman starter, this works perfectly well, and is in fact what I used.

For a recipe that looks a lot like the street food ones I have had stuffed with rillettes, see here (in French). I only found this after making my own rather different, but still practical and tasty, version.

Interesting about cooking the breads in a pan like pancakes. I've only cooked them in the oven. Fouée or fouace is just another name for pita bread, as far as I can tell. Very good too.

Do you know the restaurant in Tours, near Place Plumereau, called Comme AutreFouée? It specializes in these breads with white beans and rillettes. I think it's still in business...

Ken got there first... your pizza stone will work just fine... and our World Book of Bread lists Fouace and the Turkish Pitta and a Spanish variety as the same thing... it also classes Oven Bottoms [the northern UK version of a bap] as the same thing... just with a variation in the dough with the latter.

So have fun with your Fouaces... but most important... did Simon's Aunt and Uncle like them?

Mind you... if you'd used the pizza stone, you wouldn't have been able to demonstrate that suction fan you use as a cooking smell remover!! ;-}