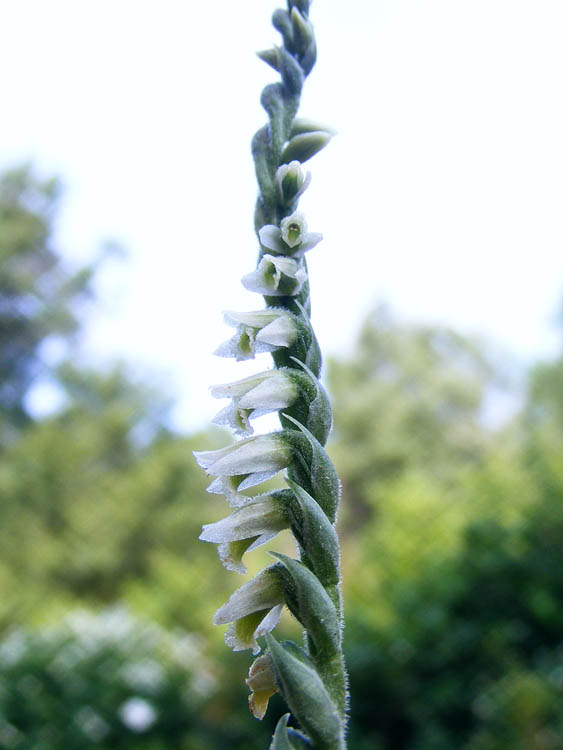 Yesterday I mentioned that I had been on an outing to Luzé to try to find the rare and tiny orchid Autumn Lady's-tresses Spiranthes spiralis. There were none to be seen, because of the dry weather, and apparently at least one of the known colonies has been destroyed by a careless farmer. There are only 21 sites that occur in Indre et Loire, and all but 3 of those sites only have a single plant. They are rare, endangered and protected throughout their range, having been pushed out of their habitat by urbanisation, tourism (especially at the coast), beautification of wasteground, the abandonment of grazing and the consequent growth of scrub and plantations of trees. Their genetic pool is now very limited because pollen is not being transferred from group to group - very few of the colonies are situated close enough for pollinators to visit more than one - in other words the metapopulation has been fragmented. Only about a third of the plants flower in any one year, but they are long lived for an orchid (10 - 20 years).

The day before yesterday I said we had started swimming in John and Alice's pool. They live about 10 minutes drive from us, in a hamlet outside Bossay-sur-Claise. They have a grassy carparking area at the side of their garden, which we duly parked on prior to swimming yesterday. It was only on our return to the car that I noticed a single weedy little spike of tiny white flowers going up the stem in a spiral - right in front of the car!

Part of the colony in John and Alice's lawn.
This gives you a good idea of how almost invisible they are. 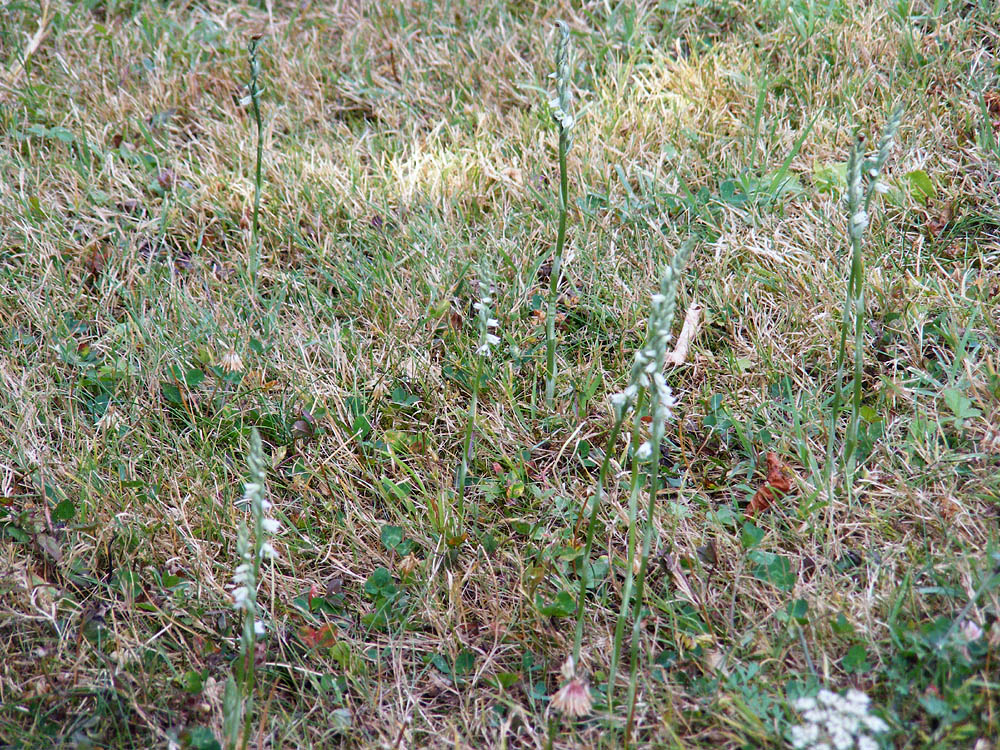 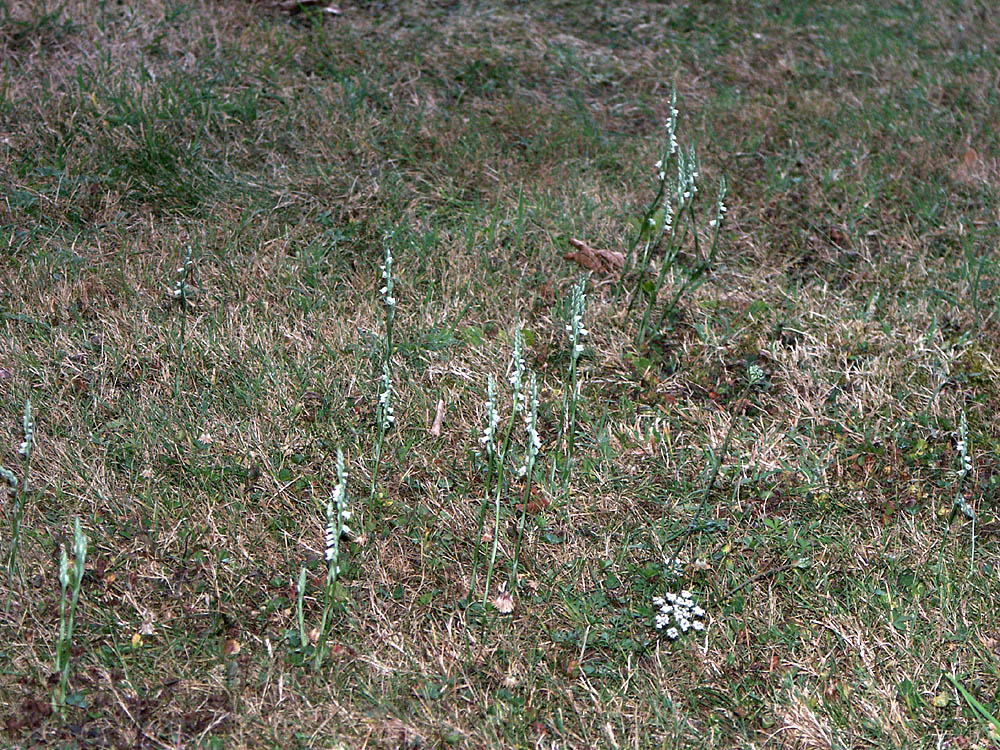 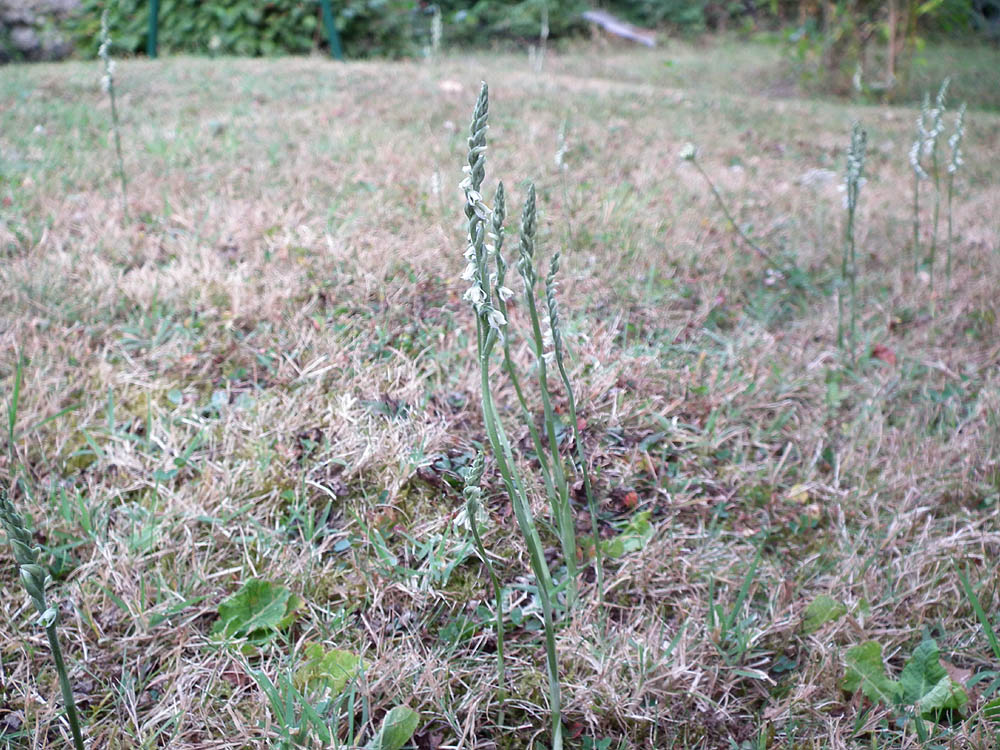 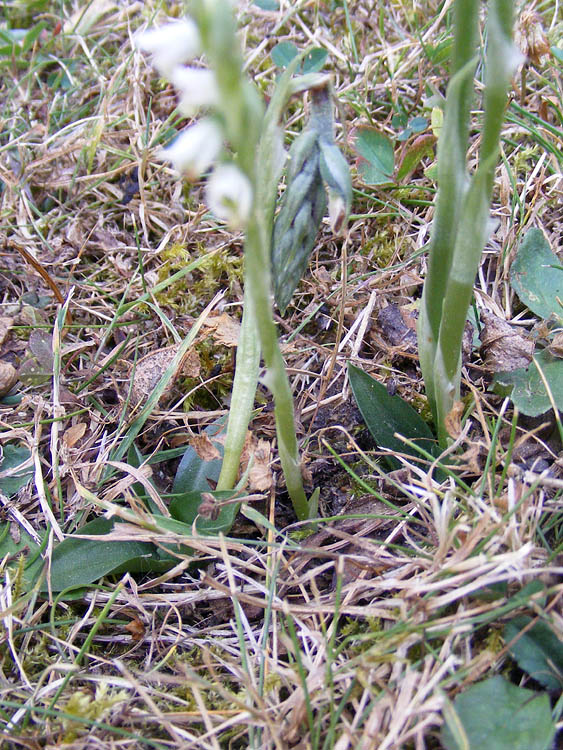 When I looked I realised there were Autumn Lady's-tresses spread over an area of a few square metres - at least 40 flower spikes!! We had managed, by sheer luck, not to run over a single one. 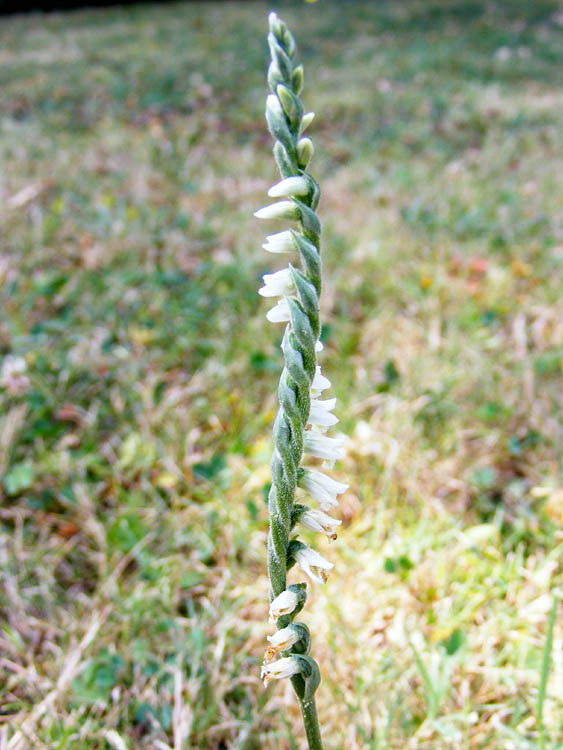 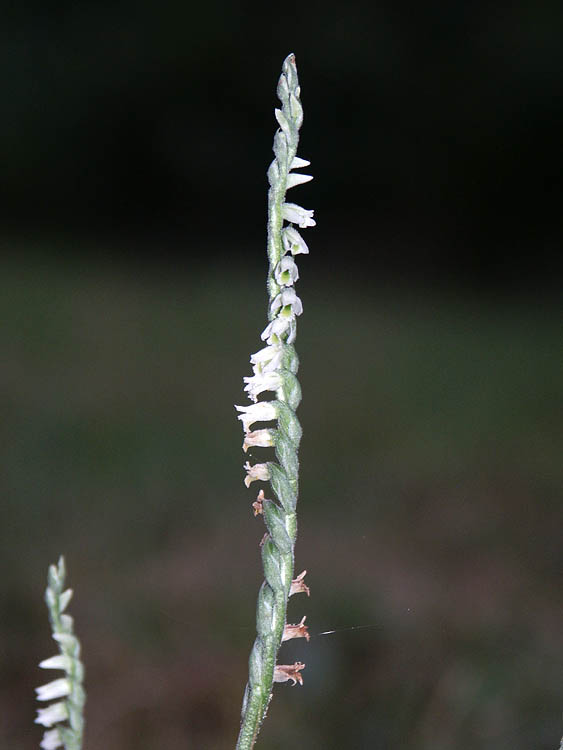 The light wasn't very good, so photographing them was difficult. Getting down on one's knees to do supermacro with the Finepix did mean that we were wafted with their strong sweet perfume though.
A close up. They are well worth
looking at through magnification. 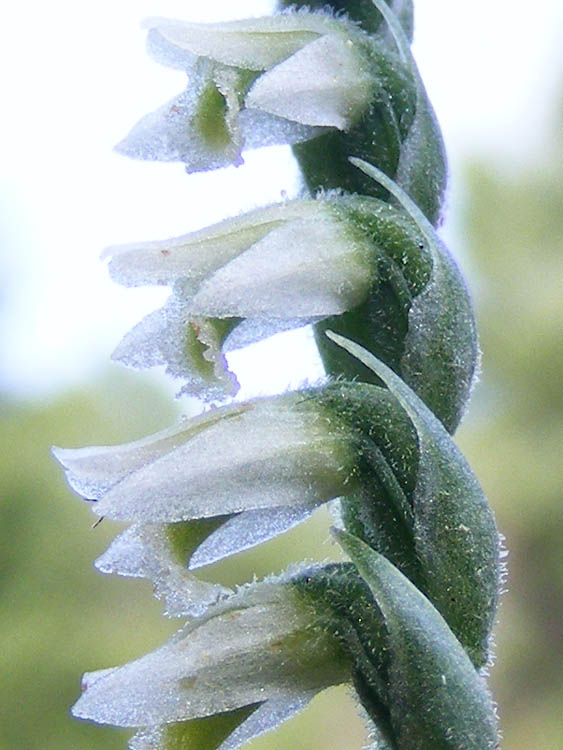 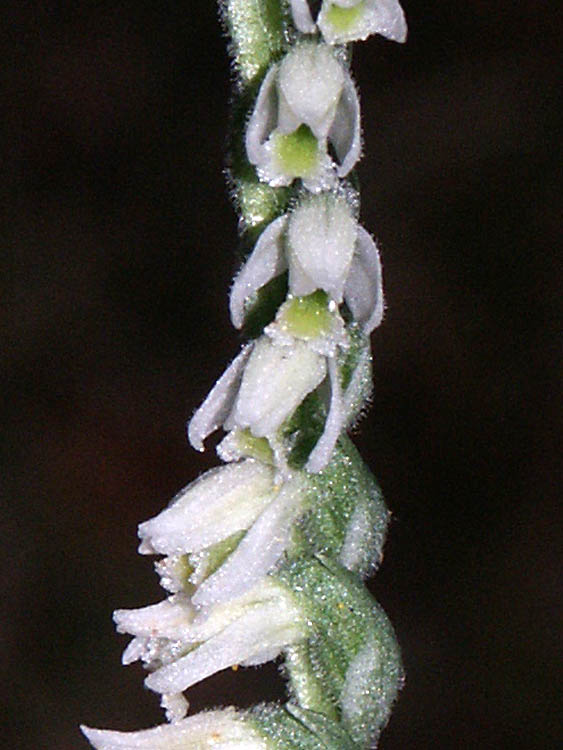 When I got home I emailed Marc, who immediately emailed back wanting map references and directions. We think it is a previously unrecorded colony! So exciting!!

Susan, this run of dry weather has meant that lawns haven't been mown.
Looking at the 'cut edge' in the background, this area is normally mown. Therefore, in a 'normal' summer, this little lot would probably have been cut off before they flowered... are there other colonies that might be out there?
Not only that, you knew what you'd just seen... how many other people would have?
Tim... in't'biblio [but the laptop is back today... in about 40min actually]
Can you use some courgettes?

How beautiful! We have spring orchids which were carefully pointed out to us by the previous owner. Discovering everything in our garden is a real treat.

Happy for you, Susan. Congratulations.

Tim: Alice had noticed them, but thought they were wild asparagus. It probably does get mowed from time to time. So far as we can work out it is one of the only colonies to flower this year (maybe because it has benefitted from the nearby garden being watered). It also seems to be one of the largest colonies in the department.

Fraussie: there are over 40 species of orchids in the Touraine, and several species are very happy in gardens that aren't disturbed too much.

I can see the confusion with wild 'sparra grass.... especially the last pic in the group of four, showing where the new bulb is growing, the two flowering shoots at the right of the picture look just like good 'sprues'... Pauline and I were wondering how wide your smile was when you spotted them!! And well done to keep the pictures well focussed despite the obvious trembling hands!

But, as it is a bulb, would the drought affect the flowering greatly? Surely, at this time of the year it is more likely to affect the formation of next years bulb... leading to a possible weak or non-flowering year in 2013.

Tim: they like dry places, but Marc seems to think they need a sprinkle of rain just before flowering. Saffron is like that too, so it doesn't entirely surprise me.

Interesting... we have had some very localised sprinklings of rain recently... and some very heavy dews... the other morning everything was soaked with the latter!!

Beautiful photographs of a beautiful plant.

I can almost feel your excitement.