Thank You for the Pizza Stone

Those nice blokes from Saint-Aignan (aka Ken and Walt) came down to visit Nick and Jean the other day. On their way home they stopped off briefly at our place and gave us a large pizza stone for the oven. They said it was too big for their oven and had been in storage ever since they moved to France. 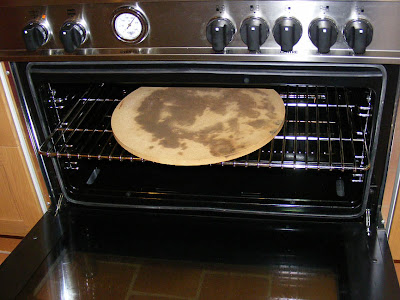 It measures 41 cm in diameter and only just fits even in Big Berta's capacious oven. I've been wanting a proper pizza stone for some time now, after improvising with terracotta tiles and caste iron frying pans and the like for years. The stone will be well used and valued here.

I tested it the very next day after it arrived. I had some homemade pizza dough in the freezer which I thawed out in the fridge overnight. I hadn't liked to get it out prior to the stone's arrival because I thought that would be tempting fate. What if it didn't fit!

Pizza ready for the oven. 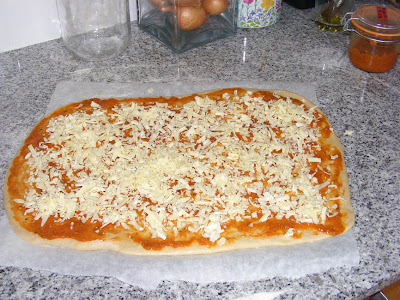 I decided to make a simple thin crust pizza as a first go. I had some homegrown roasted summer vegetable paste, but the only cheese in the house was cheddar. That would have to do.

The stone went on the middle shelf and I turned the temperature up to thermonuclear. Such a big oven takes a long time to heat up and I think the stone slows the process down. It was a good half hour before it got over 200C and I wanted at least 230C. 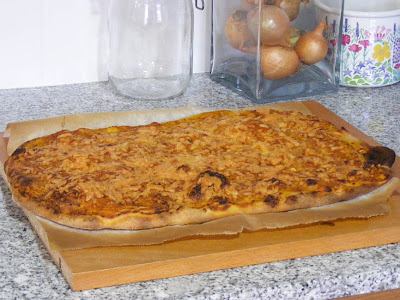 When the oven was ready I slipped the pizza onto the stone, shut the door and gave it 10 minutes. Then, unable to decide if it was quite done or not, I gave it 3 more minutes more. That was probably a mistake and it was a bit crispy, but practice makes perfect and I look forward to making many more (and the occasional rustic sourdough loaf too).

Thank you Ken and Walt for a really generous and thoughtful gift. I'll take good care of it and use it often.

Email ThisBlogThis!Share to TwitterShare to FacebookShare to Pinterest
Labels: Food and Drink, Kitchen

Look Susan... the capacious maw of your oven will take a goose! Of course the pizza stone would fit... unless it was really for Italian family cooking.
If it had been too deep for the oven I'm sure that himself would have made it oval quite quickly with a stone cutter [but don't tell Ken and Walt]...
Now... isn't that pizza a bit oval?

WV is "hyloc"... something to do with gearboxes?

I'm so glad it fit! And the pizza looks perfect (I love the little burnt bits on a pizza).

When I use our stone (we have a rectangular one that just fits in our oven) it does take some extra time for the oven to heat up. I take it all the way up to 275º (the highest it goes) when I bake pizza and it takes more than 30 mins to heat the oven, which is much smaller than yours!

Wat a noyce couple of blokes they are. Ask Simon to build a stone wood fired oven for Pizza in the backyard.
Love what you have done with the house since we last saw it Susan.

Tim, I mentioned to Susan and Simon that they might be able to get the pizza stone cut if it didn't quite fit in the oven. We talked about doing that for years, but since we had a stone that did fit our oven, we weren't overly motivated. Nice-looking pizza, Susan. And cheddar — why not?

Now you need a wooden pizza peel.
And cornmeal for a