On Christmas day last year our coffee maker died. It hadn't been doing really well for a while but the switch packed it in and as it was a sealed unit - even though I was able to take the coffee maker apart - I was unable to fix the switch. This meant that getting a coffee machine made it on to our list of "fairly urgent things to do".

On Tuesday, Huub, Ingrid and Anne-Loes visited for lunch and after the meal we offered coffee, but mentioned that it was made in a fairly haphazard way (boiling water being poured through ground coffee in a filter) because the coffee maker was dead. At which stage Ingrid said something to Huub in Dutch, which I suspect Huub repeated in English, saying they had a second coffee maker that wasn't being used and would we like it? 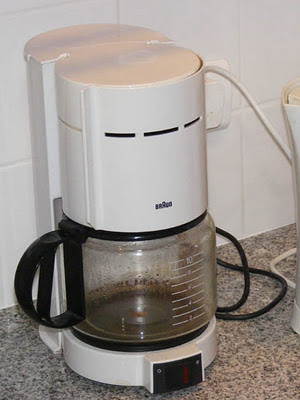 Another result is our "tea niche".

Our kitchen isn't square: the wall against which we have the sink hits the laundry wall at an angle of 14.8°. This meant that we were going to have to have a stretch of "filler" - a blank panel - to fill the gap between the end of the cupboards and the wall to make it look all neat. Then I had a though and asked Stéphane to custom build us a little angled cupboard to fill in the gap. This cupboard has no door, but is perfect for keeping teabags, a small sugar bowl and a teapot in close proximity to the kettle. 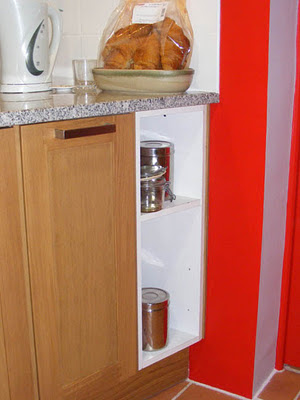 This means that we have used an otherwise unusable space and that when uncle Geoff visits he can access tea constantly throughout the day without have to find the makings.

I'm sure it makes "een lekker bakkie koffie" [a great cup of coffee].

I can not start my day without a cup of coffee. It usually takes three before I'm sociable.

Two days back at work with early out the door starts at 7.00 am, I stop along the way for a caffe latte which then sits in the cup holder in my car. I become almost human again.

That's a good coffee maker. We have one and last yr we broke the tip of the carafe. So we need to order new one from some places in the US.