Acutally, this tree isn't called the Sentinel Oak, or even le Chene sentinelle. I just called the blog post that because it's the sort of cliched, grandiose name that isolated large trees tend to get. In fact, so far as I know, this tree hasn't got a name at all, apart from its species name, which is Quercus robur (English Oak, French Oak, Peduculate Oak, le chene pédonculé - take your pick). 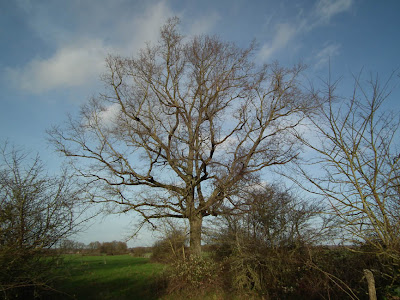 And speaking of clichés, did you know that the word does have the same meaning in French and English, but in French there is an additional meaning, very commonly used but rather different and unexpected if you don't know the etymology?

A cliché, as I am sure you all know, is something expressed in a way that is obvious, overused, trite, shallow, predictable, banal, stereotyped. The origins of the word come from the technical world of pre-digital printing, where it meant a proof printing plate (sometimes called a 'stereotype' in English). The current meaning is associated with the practice of casting common phrases as a single piece for the moveable type of these proof printing plates. In French though, this original meaning branched off somewhat and has a second meaning as a snapshot, a photograph or photographic negative. In French books and magazines photographs are often credited as clichés and French people post their clichés de vacances (holiday snaps) on their page Facebook.

And aren't they just (usually, in my case).

Thanks, I will remember that (probably).

The dictionary says that the cliché was originally a photographic negative you could use to produce an unlimited number of positive prints. That's the idea of repetitiveness in the figurative use of the word cliché. By extension, cliché came to mean the photographic print too. There's a verb clicher, and the origin is onomatopoeic, coming from the sound of molten metal being poured into moulds, if I understand correctly.

Ken: The print proof meaning must be the original, the photographic negative came after, itself an extension of the idea of repetition. I didn't explain it well.

PS Ken I meant to add that the story about the onomatopoeic origins the word refers to the making of letters and phrases for proof plates.