It's that time of the year again - where I look through the thousands of photos I have taken because they were interesting at the time, but which I haven't yet written about. The work we did in the window in the dining room is one such item.

When we were insulating and lining the wall of the dining room in December 2010 I mentioned that it would be nice if we could introduce some curves into the scheme of things - placo is great at doing straight lines, but everything was starting to look very flat. Rather than do anything too radical (and time and money consuming) it was decided that we would put a bit of a radius on the very deep windowsill. We hoped it would have the effect of making the wall look more solid than just placo, as well.

The blocks are first glued in place 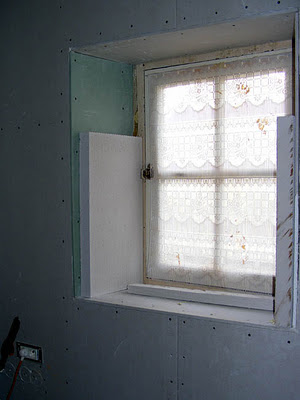 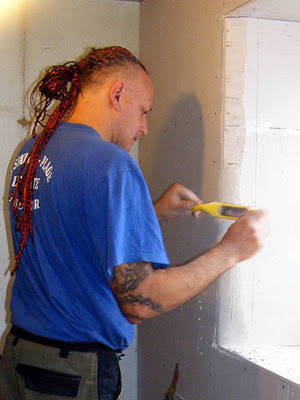 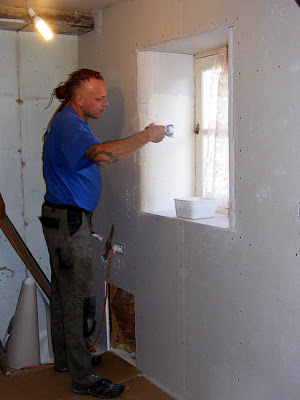 We used 5cm béton cellulaire blocks. These are the very light cement bricks, full of air and cuttable by hand, that we had used on part of the upstairs bathroom wall. We just glued them to the placo, shaped them using a hand rasp, then plastered and painted them. 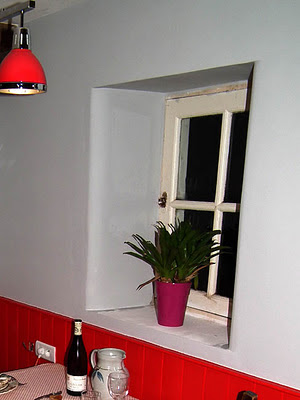 I think they work really well, and am really pleased we took the decision to do something slightly different.

I agree, Simon, they look very good... we'll probably plagiarise this for the longere.

It is a good effect and looks well worth the extra effort.

what is UP with monsieur's hair?

Jeannette: Lol. He goes to Paris and comes back looking like that several times a year. Friend who is a hairdresser I think.