Dorade (sometimes spelt Daurade) or Sea Bream is my favourite white fish. Bream comes in many varieties, both fresh and salt water and can be found all over the world.

The prime species in France is the Dorade royale, Gilt-headed Sea Bream, but it is a Mediterranean fish with stocks diminishing at an alarming rate, or farmed with varying levels of ecological care around the Greek islands. It is usually very expensive, with a moderately sized fish weighing between 500 g and a kilo costing 20 - 35 euros. Even if I felt comfortable about eating a fish that doesn't make it on to the Marine Conservation Society's sustainable list, it's way too expensive for us.

Just before sealing in its foil parcel. 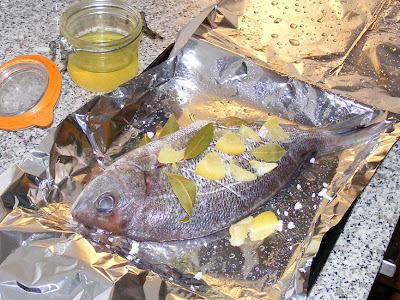 Its cousin the Dorade grise (Black Sea Bream) comes from a different kettle though. Numbers fell in the 1970s - 80s through over fishing in the Atlantic, but it has bounced back now. It is netted along the French Atlantic coast, the Channel, all around the British Isles and the North Sea. Never as highly regarded as the Gilt-head, it is nonetheless a very nice fish. I guess it's the Pollock (Colin) to the Gilt-head's Cod (Cabaillaud). Anyway, when I saw some at the fish stall in the market in Preuilly on Thursday for only €7.50 / kg I was delighted and bought one for dinner costing a smidge under €4.

I asked the fishmonger to gut it (vider - literally 'to empty') and cooked it en papillote (in the oven, sealed in a foil parcel) flavoured with homemade North African style salted lemon (citron confit) and bay leaves (feuilles de laurier). I served it with potato salad and a still white 2010 Turonien Vouvray from Chateau Gaudrelle. I thought it was rather good, but Simon didn't like it, which was a shame. He found the bay too medicinal and can't be bothered with unfilleted fish.

Well, you enjoyed it! You went to the trouble of preparing it, you did all the hard work... you deserved to enjoy it.
Get a box of fish fingers for the freezer for Simon... or get him some saumonette. Neither have boney things in.
Or, with a fish that size, fillet it yourself on one side, put it back together... cook it as one the same way... serve Simon the slice.

All the more for you, Susan!

We love fish, although I can understand Simon's point about unfilleted fish being a bit of a pain to eat.

Next time, if there is a next time, how will you prepare the fish?

Tim: I do buy saumonette every now and then. I usually make a stew or soup with it. I find it excellent value and good for bulking out more expensive fish. It's flavour is satisfactorily fishy. In Australia the fish part of fish'n'chips is a type of fish known as flake - it's nice safe boneless shark.

Gaynor: I'll fillet and shallow fry probably. And he'll dose it with sweet chilli sauce because it's boring.