The Paris Métro has always had lamps by the station entrances, which are often referred to by the people who refer to this sort of thing as totems. These have been in a variety of styles, becoming less ornate over the years. This example is from the second re-imagining in 1924, and replaced the Val d'Osne style in the 1930s. 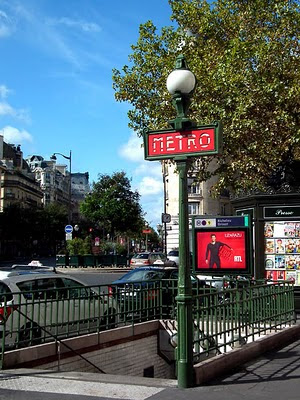 The "Dervaux style" was art deco based, and designed by Adolphe Dervaux, who was also responsible for mainline stations in Rouen and other places. When the Paris Metro celebrated their centenary they also celebrated the architecture of the system, placing plaques at various places across the network giving details of the details. 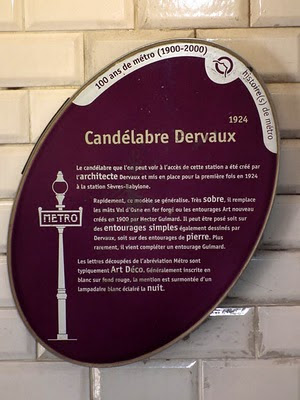 The lampost you can see at the entrance to this station was designed by the architect Dervaux and first installed in 1924 at Sèvres-Babylone station.

The model spread rapidly. Very sober, it replaced the wrought iron Val d'Osne lamp or the Art Nouveau post created in 1900 by Hector Guimard. It could be set either on a simple post also designed by Dervaux or stone posts. More rarely, it could finish off a Guimard post.

The cut out letters of the abbreviation 'Métro' are typically Art Deco. Generally inscribed in white on a red background, the sign is surmounted by a white lamp lit at night.

I want to be there!

Every time I'm in Paris I look above all the street level modern shops and just marvel at the architecture.

Have you been to Chartier Restaurant?

A very handsome post and no doubt under several layers of paint by now!