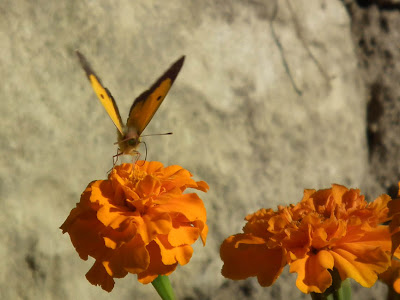 Although we have crashed into winter, with temperatures dropping below 0°C and not rising above 15°C, following a warm spell of weather with temperatures in the 20s, it's the sort of winter everyone can enjoy. The frost has been heavy, but the days clear and sunny, and the late season butterflies are hanging on, nourished by ivy, valerian and African marigolds. 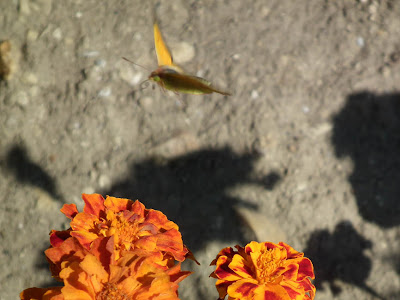 Speaking of marigolds, one of the most common butterflies on the wing at the moment is the Clouded Yellow Colias crocea. Its French name is le Souci (i.e. the Marigold). 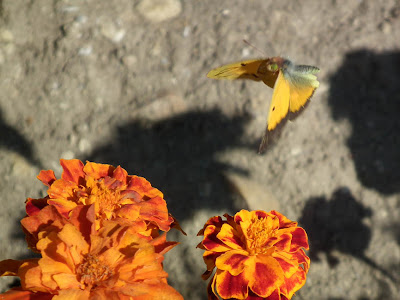 Simon took advantage of one of the 'motor drive' type functions on his new camera to take a series of wonderful photos of Clouded Yellows working over some African marigolds up by the chateau on a sunny afternoon a few days ago. He was amazed by how much effort flying takes and what muscular power these butterflies have. 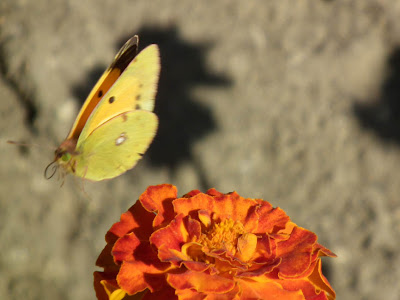 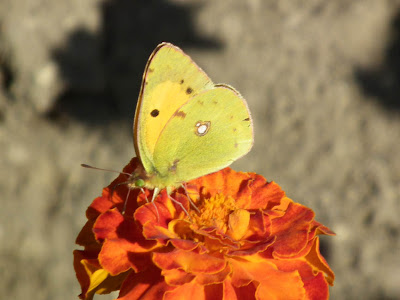 The 3 species are notoriously difficult to tell apart. There are some subtle differences in wing shapes (virtually impossible to distinguish without having the different species side by side to compare) and all the other features observable with the naked eye concern the patterning on the upper sides of the wings. Unfortunately, this species almost never rests with its wings open, and you can not always be sure of the details if you see them bouncing past you on the wing. Being able to take action shots that freeze the view of the upper sides really helps with identification later. 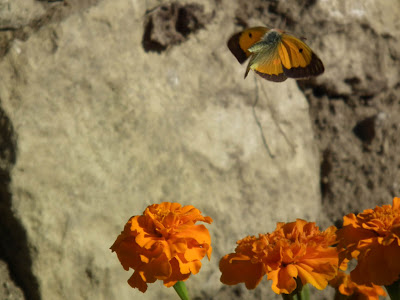 I find the easiest feature to check is the dark band on the edges of the lower wings. If it is thick and dark rather than petering out into thin scallops or even reduced to a series of spots the butterfly is C. crocea. If the dark margin is weaker, you have one of the other species (and a real headache if you want to get further than that). They pass the winter as caterpillars, coming out to eat various legumes when the weather allows and slowly growing until they can transform into adults in the spring.

PS Souci is actually the French for Pot Marigold Calendula officinalis, not African Marigold Tagetes hybrids. African Marigolds are also known as French Marigolds. Simon was not wearing Marigolds when he took these photos - that would be silly.
Posted by Susan at 09:00

Wow! Those pictures are stunning.

I did some research because it seems the English word Marigold is a "mot passe-partout", an all-purpose word. It may apply to different plants of the same family but of different genera.

The flower in all the pictures here is French Marigold (Tagetes patula) known in French as "œillet d'Inde" or Carnation from India, because it was originally imported from the West Indies or Indes occidentales.
A larger variety, Mexican marigold (Tagetes erecta) is know in French as "rose d'Inde" for the same reason.

Now, Souci officinal (Calendula officinalis) is in the same family but is a different genus. It is known in English as Pot Marigold. QED!

It seems, also that Marigold is also known in Spanish from Spain as calendura. Is it where the confusion with Calendula comes from?

CHM: I was using the term African marigold sensu lato to indicate a Tagetes hybrid. I'm afraid I made no effort whatsoever to identify which species they may be derived from. I thought someone would probably point out that Souci is not the French for Tagetes type marigolds but I liked the word association of the title and couldn't be bothered going into the nitty gritty (for once!) I should have just added a simple postscript - in fact, I think I'll do it now :-) since I suppose there is enough confusion about marigolds without me adding to it. I thought of trying to claim that Simon was wearing Marigolds (a brand of rubber gloves in case you don't get them in the US) whilst photographing the soucis on the tagetes, but felt it would stretch the relationship with the reader a bit far.

These are wonderful photos.
One certainly gets the sense of
flight of these little dancers.
Hope we get more of them come
next spring and summer, Simon.

I've always called them French
marigolds too, and I love their
funky scent. They are always the
last to die in the fall, still
giving a bit of color before
winter claims even them. Susan,
you never stretch your
relationship with your readers!
We all learn so much from you.