St Mandé was a Celtic saint said to be from Ireland, but who travelled to Brittany in the 5th century. He set up a monastry on the island now named after him - Isle Maudez - banishing the snakes in the process. In the 9th century his relics were in danger from Viking raiders and were taken to Paris, this being the reason there is a commune called St-Mandé just outside the French capitol.

All of this has no bearing on the reason why in Ferrière-Larçon the local magic well bears the name of St Mandé's well (marked here, point A). In other places, the St Mandé's wells are said to cure worms, (a symbolic repeat of the banishing of snakes) but in local legend this particular well is capable of curing fevers, rickets, and unhealthy pallor.

Four years ago we walked straight
past this without seeing it. 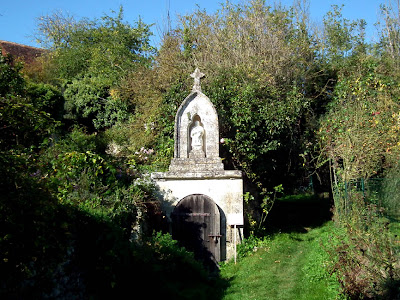 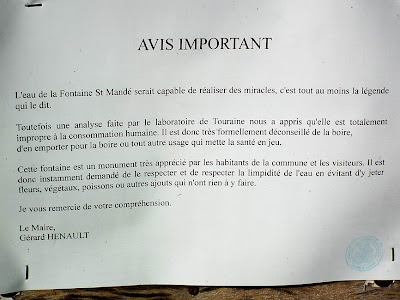 The water from St Mandé's fountain is capable of delivering miracles - at least, that's what the legend tells us.

However, an analysis done by the Touraine Laboratory revealed that it is totally unsuitable for human consumption. We therefore strongly advise that it is not drunk, taken away to drink or used in any other way that could put health at risk.

This fountain is a monument greatly enjoyed by both locals and visitors. You are urged to respect it and to respect the crystal clearness of the water by refraining from throwing in flowers, vegetation or fish, or adding other things which don't belong there.

Thank you for your understanding. 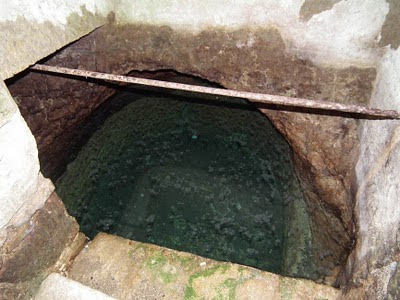 The water in the well is about 4' (1.2 metres) deep, but looks a lot deeper due to the reflection of the ceiling. It is beautifully clear, as the mayors notice states, and is set up so that it just magically appears - not seeping through the soil as at Chaumussay, but apparently directly into a pool.

St Mandé has many names, including Maudé, Maudet (Breton French), Maodez or Modez (Breton), Maudetus (Latin), and is commemorated in Cornwall as St Mawes.

p.s. Some people might think they have seen this before. You haven't, but are obviously psychic.
Posted by Simon at 09:00

Simon,
You must be commended, along with the mayor, for not putting a period after the St abbreviation. In French if a word is abbreviated with the first and last letter [whatever there is in between] there is no period at the end.

For instance, Mme is for Madame, Mmes for Mesdames, Mlle for Mademoiselle. But you write M. for Monsieur and not Mr or even worse Mr. MM. is for Messieurs and Dr for Doctor, and so on.

If the abbreviation is the first part of a word, the period at the end is requested.

It looks pretty un-limpid to me! It's got bits floating on the top...
The Chaumussay water is great with single malt whisky... you add the whisky to kill any bugs...

CHM... thank you for the French lesson... as if French isn't hard enough without having to remember where to put full-stops and where not!! I'll just have to try and remember. But my English grammar and spelling is bad enough... so is there hope.

VW is "wompoidi".... the sound of a wallaby bouncing around the French countryside.... say in a suitably Rolf Harris voice "Have they caught it yet?"