Letter From a Car

I am writing this sitting in Célestine in the car park at Chenonceau, which is pretty high tech for me.

Unfortunately I am writing it in a word processor rather than in the blog, then will transfer it later. I walked up to the local hotel, where I had wi-fi signals showing, but they are all expensive pay ones rather than free wi-fi provided by the hotels. The Hotel de la Gare in Montrichard has free wi-fi, but that isn't where I am. It's a pity I can't find a free connection in Chenonceau, because I would not be tied to sitting in the car in the cold car park, but rather in a nice warm café having a coffee, writing. I could go to a café and write in the word processor, I guess, but that might be sensible. 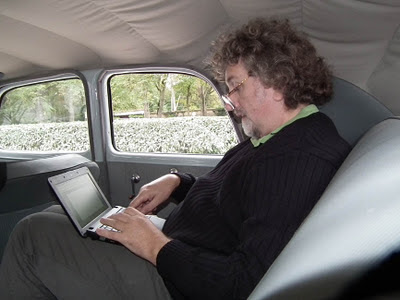 The computer I am using is an Asus EeePc, which I recently bought online from England. It was very inexpensive and runs Windows XP, both very important considerations for me.

Having a wireless laptop means that I had to get our home internet connection and router sorted out: for years we have been connecting to the internet via a modem that has always claimed that we weren't connected to the internet. No matter what I did, the internet showed as disconnected, even when I was reading web-pages.

Luckily Stéphane knows computers (is there no end to the man's talents?) and didn't switch off when it came to learning about networking (unlike me, who decided that I knew enough and didn't want to be bothered with that kind of stuff). We spent an afternoon saying “but I don't understand” to each other, then suddenly everything cleared itself up. I don't think either of us really know what the modem thought it was doing, but it decided after prompting to do it all differently. This means we can now move files between computers without using a data key, and the internet can be used on more than one computer at once.

The most important implication of this is that I can listen to the cricket online while Susan does grown up business emails and the like.

Technology – sometimes it is a great thing...

Email ThisBlogThis!Share to TwitterShare to FacebookShare to Pinterest
Labels: Random Thoughts, The Car and Driving

Simon,
Sue and I also use the the Asus EePC for our travels. It's a little boomer we did all our trip blogging with it - talked to home on skype and I was able to keep an eye on work back home.
Light to carry as well.
What could be worse than snuggling up with Celestine?
Leon

If you use Orange.fr with a Livebox 2, I have an important tip. We have found the Livebox reliable enough but the signal was quickly dissipated by our 1 metre thick walls. It could manage one wall, but through the floor as well? So we have just bought a Orange 200mb wi-fi extender that distributes the signal through the house's power system. It was entirely 'plug and play', much to my amazement. So now we can have wi-fi connection at full speed from any power point; in the garage, in the loft, in the garden on an extension cable (sunny days only....).

When I saw today's post title I thought you had a guest writer ... none other than 'la grande dame' herself: Célestine! :)

Simon.... had you been sensible and gorn to the caf....you wouldn't have had the photo opportunity of showing the comfort and room in Célestine.
Abbe 'Enri... many thanks for that tip... we are OK WiFi in the Laiterie as it is a 'new build' and the floors and walls inside are wood, 'rails & placo' and chanvre insulation.... but here in the longére wifi is a know-not-on-your-life experience. Will look into the WiFi Extender.

I had looked at the wi-fi extenders, but at the moment none of the current devices comply with european law on radio interference or the manufacturers own codes for the same.

This could have real implications on listening to Radio 4

A friend of mine has an I Pad with an upgrade which somehow connects to satellite signals so that she does not need wifi and can use the net absolutely anywhere, even in the wilds of Canada. Don't know about thick stone walls, mind you, as we don't have many here - alas.