The French public and in particular, apiarists, are worried about a non-native bee-eating hornet which is expanding its range. Since being observed for the first time 6 years ago, probably after arriving in a shipment of bonsai planters from China, the species has well and truly established itself in the south-western third of the country centred on Gascony, and by 2009 had reached the Touraine. I saw my first one in our garden this summer, and until recently it was the only one I had seen.

However, not long ago we took clients to see the spooky troglodyte alley in Beaulieu-lès-Loches, and there was a single Asian Hornet Vespa velutina nigrithorax (le Frelon asiatique à pattes jaunes in French) feeding on the ivy in the cutting. It did seem to me that the nearby honey bees were nervous and moved away from it quickly, but it didn't seem to be in the slightest bit interested in them. What it wanted was ivy nectar - the same thing the honey bees were after. Likewise it showed absolutely no interest in me. There have been a couple of attacks reported in the media, and this year a death, but generally they do not interact with people, unless defending their nest. 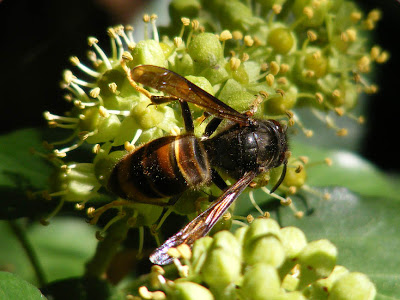 Even before the true level of threat from this foreigner could be assessed by entomologists the apiarists had launched a campaign against them. The principal method of control adopted was the use of sweetened beer traps to reduce the numbers of newly emerged queens in the spring. There are some emotive videos on YouTube showing desperate apiarists emptying beer traps full of insect soup on a shockingly regular basis. 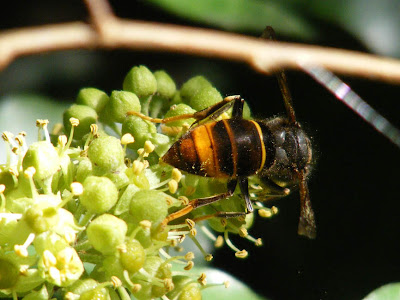 Equally shocking, once the entomologists had a chance to study the situation, were the figures on what species were actually in these traps. Turns out that unless you modify the beer traps carefully, the bulk of their catch is ants, flies and Vespula spp wasps (Common and German Wasps). Slightly more European Hornets and more than 4 times as many Honey Bees were caught than Asian Hornets in trials conducted by the Muséum National d'Histoire Naturelle. However the really concerning by-catch was butterflies and on one test site the toll was so high they ended the experiment prematurely as it was felt to be unjustifiable to continue. 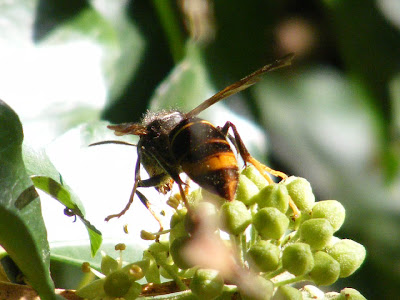 While they undertake a long term study, the MNHN's interim advice to apiarists is use traps modified so that non-target species can escape or can't get in, baited with old fermented honeycomb and only to set traps out, positioned close to bee hives, during periods of intense attack by Asian Hornets, from August to October. This should have the effect of reducing the pressure on the hive bees. Their current conclusion is that attempting to trap queens in the spring is wasted effort, as most of them will die anyway due to natural causes. The most effective control is to destroy any colonies found later. This must be done before dawn or after dusk, to ensure the nest is occupied at the time. Nests should be injected with insecticide, then cut down and burned to prevent birds eating the poisoned insects and larvae. The fire brigade will do this for a fee of €100.

If you read French the MNHN have a lot of information about this problematic species here.

Email ThisBlogThis!Share to TwitterShare to FacebookShare to Pinterest
Labels: Insects