... you have to make one. Which is exactly why we have been taking stones out of our metre thick wall.

I have always liked the look of niches in stonework, but in this house we only have one which is in a roof space that was too low to use so was blocked off when we insulated. Thus I decided that I would like a niche half way up the stairs, a place which is always difficult to decorate. 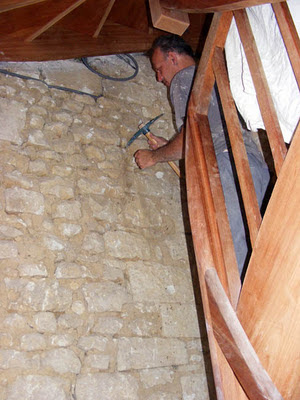 This we started as soon as the first lot of pierres vues work on the upper staircase was finished. After identifying a place where both the stonework would allow us to remove stones without collapsing and the niche would be viewable, we started - gently at first, but progressing on to hitting things with a hammer and levering with a crowbar. It was interesting (if a little alarming) seeing a 1 metre section of wall compressing sideways as we levered, but we managed to take out the required stones without causing any damage. This has left us with a niche about 20cmx25cm. 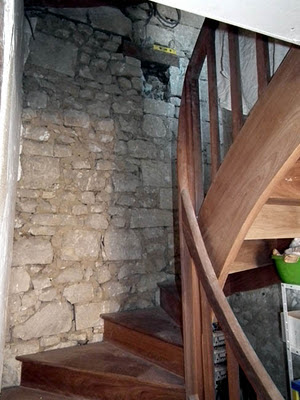 The stones we removed to create the niche are really in what is the end wall of the graineterie, the oldest part of the building(s). The construction is typical of very old stone buildings, and is a sandwich of two thin (and quite skimpily mortared) stone walls infilled with mud and smaller stones. This makes for a very solid, thick wall which should hold itself together for a long time. Now we have exposed the mud we have to cover it up again, which we will be doing with chaux mortar. 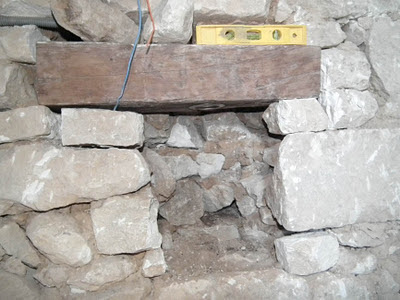 We have put in an oak lintel, made out of the wood that was once our back door's doorpost, and we have set a low energy downlighter which was surplus to requirements in the the kitchen into it.

The next big decision is what we are going to put in the niche, but that will have to wait: we have serious kitchen fettling to do this week.

That looks great Simon... I like the downlighter let into the lintel! But why use a level? A bit shew looks mor real!!

On the tram coming out of the city I saw an external niche, usually reserved for a staue of Mary, with a garden gnome in it.

There you go; garden gnome is a great idea.

Surely the niche is for the emergency lighting system.... a candle in a holder and some matches.
Or, failing that, a small bottle of something strong and a glass... to help you ascend the next mile of your grand staircase.
Failing that...how about one of those birds that tweet everytime someone walks past... as a burglar alarm... sorry for the terrible ideas... I've got a cold!

I always love the idea of a niche too.