Yesterday at 9.00am there was a knock at the door. It was Mickael the plumber, who we had last seen at the start of July, here to finish the plumbing he didn't get done that day. In addition to installing the pipework for the sinks, he fitted the raccordements for the gas stove top.

This means that in addition to the electric oven we have been using for a couple of months we now have a fully functioning cooker top. 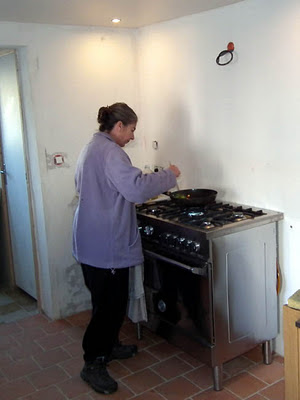 Let me introduce you to "The Beast" aka the Italian Job MkII.

It is a Bertazzoni A 90 5 MFE XE, an Italian cooker with five gas burners and a huge 108 litre oven. We were very lucky to get this cooker, as normally it would have been well out of our price range.

Regular readers may remember back in January this year I wrote about the effort needed to find a good cooker at a good price. After that post a blog reader de-lurked to say that they had a cooker sitting on their terrace that they wanted done with.

We rang Chris and Annie (for it was them) and chatted about the cooker, which had been delivered to them by mistake. That is, they had ordered a cooker from the UK, and when it arrived it was the wrong one. Amazingly, the person who subsequently delivered the right one had been given no instructions about the previous cooker, so it was left, sitting on the terrace. After that, the logistics of getting it back just became too complicated. 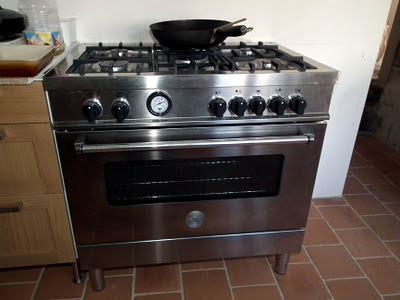 A large crate is not the right aesthetic for a stylish terrace, and understandably no-one wanted it just sitting there for another winter. We popped over to visit, which was a really pleasant way to spend an afternoon, and after looking at the cooker decided to make a totally inadequate offer to the shop it had come from.

Amazingly, the offer was accepted, so we drove over again, had a nice glass of wine and loaded the cooker into the car and came home. After that it sat in our garage for a couple of months. We had Benoît, one of Mickael's colleagues from Bertucelli's, put in the pipework for the gas in March, then after the kitchen floor was tiled the cooker was brought inside and the electric oven wired up.

And there it sat until yesterday, when the puzzle of why we couldn't find the right flexible to connect the gas was solved - Benoît had soldered on the wrong thread (gas bottle thread is left handed). Mickael sorted it out in no time, and while he was doing that we went off to Yzeures to buy our first gas bottle from the service station (10kg of Butane, costing €9.95 plus a €1 security deposit on the gas bottle itself). Based on our consumption of 250ml camping gas cannisters we figure it will last at least 6 months.

This was such a great leap forward that Susan felt a bit overwhelmed. She opted to start by cooking a simple fried rice to test the double ringed wok burner. This was a success. Somewhat unfortunately, at dinner time we were considerably distracted by a couple of time consuming enquiries about tours, and by the time we got around to cooking it was getting late, so we just had braised pork chops, steamed potatoes and peas. It is obvious the bigger burners are going to take a bit of getting used to as it seems to be impossible to turn them down below 'boiling furiously'. The potatoes narrowly avoided being burnt after boiling dry, but the chops turned out rather well. And the most important thing was that we were using 3 burners at once! It's going to take some time to realise just how much this can expand our repertoire.

Email ThisBlogThis!Share to TwitterShare to FacebookShare to Pinterest
Labels: Food and Drink, Kitchen, Our house in Preuilly

What fun you'll have getting to know it though.

It's amazing what a difference it makes! I look forward to the day when my shell of a kitchen is in better shape. We have a gas oven connected up though, even if it's not the most exciting of surroundings. But we get through a 13-litre bottle of butane in 3 weeks. Oops!

Justine: Time will tell what we actually use, so we may be in for a shock.

Congratulations !! Having a fully functioning cooker at last must feel wonderful.

(Although the food you produced on your previous arrangement was always excellent, so well done!)

Amazingly, we are still using the very first gas bottle we bought in 2007, although there is a spare in the cellar. Mind you, it only gets used for about 8 weeks per year, so that could have something to do with it !!

Have you got the right nozzles in the burners for the gas your are using... we had to change ours. Also Pascal said an in-line reducer [rather like the water pressure reducer] was an answer to the too much gas problem.

Tim's comment has reminded me that our cooker came with burners that burned far too furiously but a second set of nozzles was supplied with the machine. We had to buy the correct spanner to change them but after that they worked fine.

we've done the replacement jet thing, but what I haven't yet done is the adjustment for simmering. I knew it had to be done because I read the instruction manual, but was waiting to find out if any adjustment was rewuired before I broke out the screwdrivers.

i am jealous of that nice stove.....would love to cook on gas!! and with so many burners....u can entertain crowds!

Looks superb--think you should 'christen' it with some bubbly like a liner. Good fortune to all who cook on it. :-)

Fantastic news. Susan's culinary prowess will know no boundaries now - just look at the magnificent food she served with her more limited facilities!

We, like Jean and Nick, are still on a 2009 gas bottle. I remember us rushing out to buy TWO spares (taking our usual belt and braces approach) as it was the first time we had used bottle gas and didn't want to be caught out. At least we are using gas at 2009 prices ......

As for the story around the aquisition ....... there is nothing like being in the right place at the right time, except of course better to be born lucky than rich. I suppose you could be lucky AND rich!!!

Our gas bottles here in Saint-Aignan last about 6 months. They are 10 kg Calypso bottles. If you can get 10 kg of gas for 10 euros, please tell me where. It might be worth it for us to drive the 75 km to Yzeures for that, because we pay twice as much at SuperU in Saint-Aignan.

Ken I din't know if all intermarche/bricomarche places are the same price, but we bought the basic no frills Intermarche gas. You will have to cross the river and check! At the moment the consignment is 1€, so it's probably worth having one in reserve.