The second of our three steps forward is no less mometous than the first - we have started laying the tiles in the entry hall.

We finished the structural stuff in there in July last year, but because we don't see it every day (we mainly use the kitchen door) it kind of falls off the "work to do" radar. However, we have had the tiles sitting on the front courtyard ever since they were delivered in May. Just over half of them were used to tile the kitchen, and the rest are for the entry hall, laundry and downstairs toilet. As it's not good to have them getting frosted (if they get wet then frosted they delaminate and are no good for man nor beast) we decided the easiest place to store them is glued to the floor they are meant to be on. 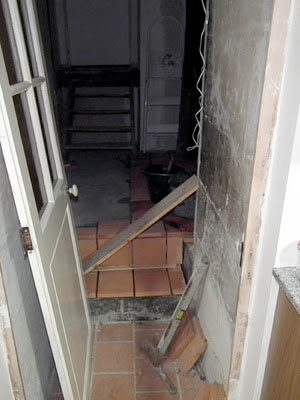 Before we could do that we had to get the joints in the plasterwork done. We have had Patrick do that and then the tiles, which he started Thursday morning with the steps from the kitchen, as this was the trickiest part. 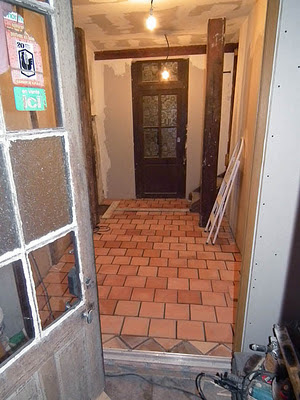 By the end of Friday the floor was laid. This means we have the weekend to apply the treatments which are necessary to protect and preserve the colour and surface of the terracotta. We can start that this afternoon, as Patrick left strict instructions about where we could (and couldn't) walk. On Monday they get joints (grouting) and then we can apply the final coats. 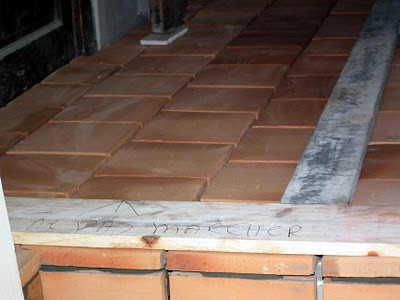 Then, I think we will reorganise the old temporary kitchen into the pantry it is destined to be. This will also involve moving the freezer out of the kitchen, along the driveway, across the cobbled courtyard, then the tiled floor and into the pantry.

Can't wait to see the end result, it looks fab!