Today is quite an interesting day, especially if you're in Paris:

Autolib' is the motoring equivalent of Velib', the communal bike hire scheme in Paris. As its name suggests however, this is all about cars - and electric cars at that. The scheme goes live today (maybe an unfortunate choice of words for something dealing with electricity) and has the potential to change the way that many people think about car use in Paris.

While we were in Paris last week we walked past one of 33 Autolib' stations being built, and I was interested to see how advanced the works were as I had heard the scheme was starting in November.

A bit of noise today for more quiet tomorrow. 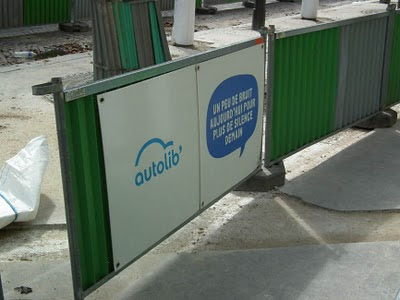 One of the hire stations. 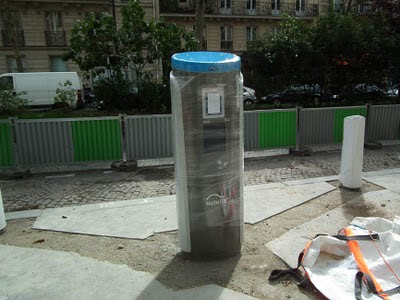 You need to join the scheme, which can be done online as can booking the car (and interesting for those used to Boris-Bikes, booking a place to return the car so you don't have to go looking for a space). Once you join you are issued a contactless card which acts as the ignition key or whatever we call what electrics have instead.

There is a fee to join the scheme of €12 per month for an annual subscription, after which you pay 5 € the first half-hour, €4 the second and €6 for every half hour after that.

The package that will most interest us (and I suspect many other visitors) is the "discovery package" for 24 hours, with a joining fee of €10, with hire costs the same as for the 7 day package.

There are expected to be 1,120 spaces for the cars to start with, with the scheme eventually expanding to 3,000 of the little electric beasties, each of which comes complete with inbuilt GPS. The cars carry 4 adults and have ISO fitting for baby seats.

I imagine that I will use this system. I have been tempted by the idea of the Velib', but a bike around Paris? Not for country bumpkins like me, but driving? That's a completely different matter: who wouldn't want to do the Etoile in complete silence?

Complete silence? Surely they'll have to fit them with some sort of raucous parp-parp hooter, or people will think they're not in Paris any more...

Yeah...... maybe, on reflection, complete wasn't the "c" word I was looking for.