The third step in our great leap forward is the continuing work on the staircase tower.

We have now finished three of the six really visible pieces of wall of the tower and are most of the way through the fourth. The third wall progressed in much the same way as the second, but the fourth will be completely different: wall four is to be chaux chanvre. 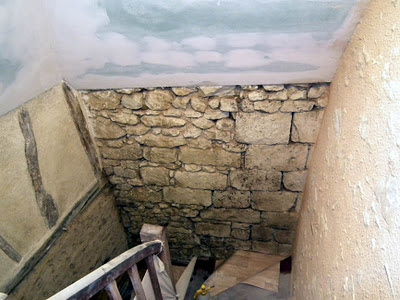 We arrived home on Wednesday evening to find that all the old render had been taken off walls three and four - the wall under the colombage. Wall four was in quite bad shape and quite a large area of wall fell out. This exposed a section of the lath, something we wanted to avoid if possible, on the grounds that the chaux chanvre won't stick to bits of dry old wood. On Thursday Stéphane applied the chaux/sable mixture to wall three, and filled in the gap where part of wall four had fallen off with cement.

Where we lost bits of wall 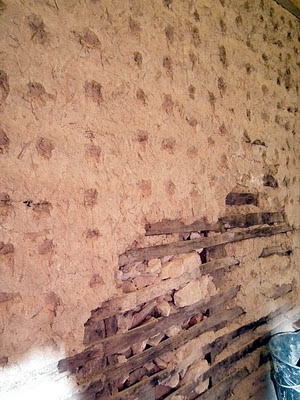 The missing parts filled with cement 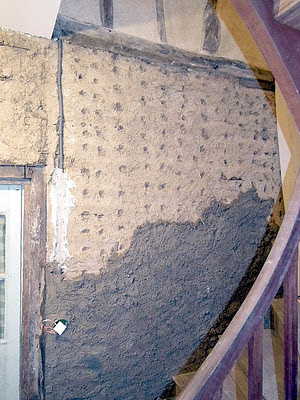 On Friday the excess mixture was brushed off wall three to finish it, and after applying protection to that wall, a really runny mixture of chaux and cement was slopped on to wall four. This will give the chaux chanvre something to grip onto.

Protection applied, time to get sloppy

This is where we are this morning: wall three completed, wall four ready for its layer of chaux chanvre which will be applied in one coat about an inch thick. Wall three has quite a few large pieces of stone exposed - you can see them in the first photo, taken before the chaux was applied, and also in the photo below. It looks beautiful. 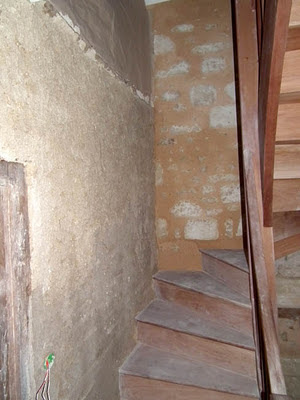 Wall 3 does look beautiful. I
love the deep honey color, goes
with the tommettes. Hard to
believe the transformation from
Pic 1 ro 3.

you are making such excellent progress, but you sure have a lot of patience!

I keep trying to explain to Pauline the necessity, at the moment, of keeping all the biggest sheets of cardboard packaging.... protecting the wall shown here is a good example!
Boy, do you look like you are having fun!!