While we were away in Paris earlier in the month Stéphane took the opportunity to finish some rather messy and time consuming work. In total, it hardly amounted to more than 1m², but it was several days of work involving dust and debris, then bucketloads of chaux, red sand and water.

The stone wall around the door of the attic bathroom has not been lined, but left exposed so that it could be finished in a more traditional manner and join the impressive carpentry in adding a bit of character to the otherwise modern dead flat plasterboard lined room.

To make the stone presentable it had to have all its crumbling old mortar and plaster scraped out. Then the moellons (rubble stones) had to be damped down for several days in preparation to being coated with a thick layer of chaux (lime) mixed with red sand to give it the traditional pale terracotta colour. The pierres taillées (cut stones) which form the doorway itself were to be left exposed. Walls like this are very common in the Touraine. The moellons were cheap to produce and easy to handle, and could easily be covered in render if a neater finish was required. Big, heavy, expensive cut stone was only used around openings and on facades.

I'm spraying the stones with water in
the morning just before leaving for Paris. 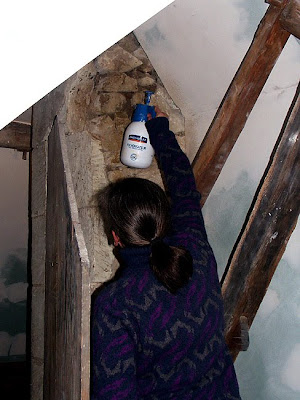 Stéphane applying the final touches to the day old render (below). He's using a stiff wire brush on partially dry render to simultaneously smooth and ensure an even texture. 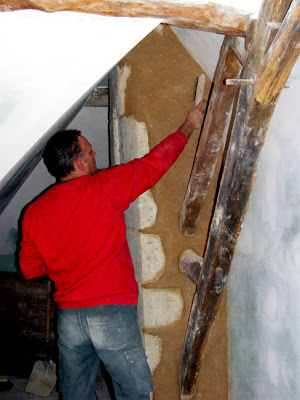 The end result is wonderfully sculptural -
Stéphane has a real eye for line and contour. 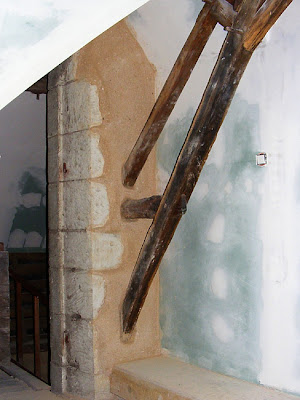 Email ThisBlogThis!Share to TwitterShare to FacebookShare to Pinterest
Labels: Bathroom, Masons, Our house in Preuilly

Looks great! it is the little touches which often make things work so well.

Susan, are you going to re-use the original door/door hinges? I notice that old door is in place when you were spraying. If so, how are you/Stephane intending to treat it?

Word verification is "sterks"... crane for "storks"? GrusGrus said yesterday that there are still some 45K on a lake near Madrid.... so still plenty to come [45 000 grues sont encore présentes à Gallocanta.]

Yes, it looks excellent. He did a great job.

And Geoffrey Rush really is from Toowoomba:

and he went to University of Queensland. He should have won last night for The King's Speech; he was just oustanding in it.

Tim: yes we are retaining the original door. We'll probably do the same as for the beams - clean with the nylon brush disks and paint with the turpentine/linseed oil mixture.

Diogenes: well, I'm afraid my knowledge of movie stars only barely exceeds my virtually non-existant knowledge of sports stars. At least I had heard of GR, but I had no idea he was in the King's Speech. I feel bound to ask though - what is someone who chooses the name Diogenes doing being interested in celebrities?

Good question. :-) I am a big fan of small-independent and foreign films (the King's Speech was small budget). Always have been.

There were a couple of great documentaries this year as well, one of which was the Banksy film "Exit Through the Gift Shop," about graffiti artists in London and Los Angeles. Very entertaining.

But I'm on the the same page with you about sports. Haven't a clue about any of them. :-)

Pauline and I went to see the Kings Speech in Descartes... mainly Brits in the audience... but cinema very crowded.
Superb film, haven't been so enthralled at the cinema in a long time... and over what in many senses is a documentary... deserved its Oscars.
Audience stood and applauded at the end here, too!
Usual thing with subtitles though... "that's not what he/she said".