This rather sorry looking tuffeau (soft limestone) building on rue Chaumont-Patin in Preuilly dates from the 15th to the 18th century. Up until the Revolution, middle class and aristocratic boys came here to learn Greek, Latin and mathematics and it was the best college in the district. 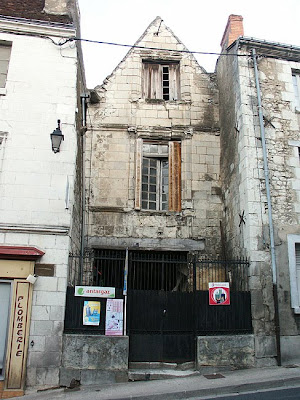 The college was run by a lay person, who lived not far away. In contrast, the convent lower down, was supervised by the Benedictines from the Abbaye Saint-Pierre who taught in both establishments. The monks would also have been hoping to encourage a few religious vocations amongst the students.

Although now tatty on the outside, and blackened by smoke, the building apparently has a magnificent attic, constructed with such care with its beautiful carpentry and well finished roof that it points to this being the dormitory. For all its beauty it would certainly have been very hot in summer and very cold in winter. There is an exit into rue des Douves and a staircase tower that gives access to the dormitory.

The Revolution brought an abrupt halt to the scholarly activities, because the abbey was forced to close and the college therefore lost its teaching staff. This was openly regretted by the townspeople.

From then on the building's history is very chequered.

In the 1920s, downstairs was the locksmith Ribotton's workshop. The forge was directly below the living quarters. Ribotton's oldest daughter Liliane married General Ailleret, who pressed the button on the first French atomic bomb, tested at Reggane in the Sahara. In the 50s the ground floor was the plumbing and locksmith workshop of Monsieur Luneteau (known as Bouboule due to his rotund shape). Later an electrician called Monsieur Perrin used it as his workshop. At the moment it is being used as storage space.

Poor little building. Reminds
me of a tipsy person being
held up by others along side.
I don't think I would be
tempted to explore that attic!
Interesting bits of the past
you manage to dig up, like
the name Bouboule. The
villagers must be very
forthcoming...and your French
must be getting pretty good.

It's a shame this nice building is left in such a condition.

It is a beautiful building, and could be beautiful again. I think it would be even more of a money sink than our house though!

Simon - when you become mayor, you can raise the coucil rates and distribute the funds to the beautification of the village. This would create more employment and village pride and tourism.
Not sure what the town folk will feel about higher taxes and it would probably make you a very unpopular Mayor - forget that idea and my ramblings - hello to Susan as well...

The building has, as they say, good bones and could be very attractive. Are there any tax credits or grants for renovating buildings in town?

Sheila: most of this detail is recorded either in the official patrimoine volumes for this area, or in the local archaeological society magazine. The comment about Bouboule comes from Roger Lezeau, a keen local amateur historian.

Diogenes: there is some assistance for certain things, but you could drown in the red tape involved. Unfortunately this building is owned by a couple who are renovating a much bigger and even sadder building - one we looked at and decided not to buy because we couldn't work out how to deal with it.

This wonderful old building is begging for some love isn't it, its beautiful though, just the way it is, its got a promise of things it could be written all over it don't you think :)