The European Brown Hare Lepus europaeus (or le lièvre d'Europe to its French friends) is a mostly solitary animal, seen in fields, cultivation, woods and forest margins. Unlike its cousin the rabbit it doesn't dig a warren, but shelters in a shallow depression in the ground, under long grass or a bush. Hares, weighing between 2.5 and 7 kg, are much larger than wild rabbits (a large rabbit is the size of a small hare). They can be distinguished by their big, black tipped ears and large eyes placed high on the head. At the end of winter and often into spring you might be lucky enough to see adults pursuing one another and even turning on each other to 'box' as unwilling females fend off over-eager males in the mating season.

The hare population in France is vulnerable at present, mainly due to habitat loss following the increasing intensification and monocultural nature of broadacre farming. Although traditionally an important petit gibier (small game) species, the current numbers will not sustain hunting. The Féderation de chasseurs recognises this and in many places it is not permitted to hunt them in an effort to allow their numbers to recover. 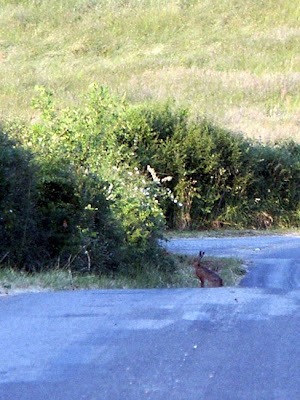 But in late January a special hunting session was organised, near Neuillé-Pont-Pierre, north of Tours. Neither guns nor dogs were allowed, even though this is one place where the hare population has increased to the point where they are causing economic damage to crops. The aim of this hunt was to capture the hares and relocate them to Saint-Branchs, 60km away on the other side of the Loire, south of Tours, where hare numbers are very low. Forty registered hunters, local residents and farmers turned up to help with this exercise, despite the rain and the freezing wind.

The hunters first erected a net across a wide open field sown with wheat. The plan was to capture about 20 hares from a 100ha area, then release them where hare numbers were at about half the density and hunting them has been completely forbidden for a few years. The hunters then divided into beaters and catchers. The beaters formed a line parallel with the net and walked slowly towards it, driving the hares before them. The catchers spread out behind the net, alert for any hare heading towards them. They took care to act so as the hares remained as calm as possible, but inevitably these nervous animals panicked and hurtled into the net. The catchers worked as quickly as possible to disintangle each hare, despite its struggling and squealing. Once free of the net the hares were placed in wooden crates for their trip to their new home.

A video of the operation can be seen here.

PS: The above post is largely as reported in the Nouvelle République. Subsequently, Roger Hale of the Hare Conservation Trust made a detailed comment (see below) outlining his concerns about the practice of relocating hares.
Posted by Susan at 09:00

Hope they were all resettled successfully,I saw a hare on the range side of South Street last night and another one near the old Foundry last week, so they are not scarce here. I probably see one a fortnight in various places.
Are ours introduced as the rabbits were ?

Read about this in Nouvelle Republic... one thing I like about France is the management of/for wildlife... alright, they shoot some... but at least it is for the pot!! The offshoot is a more varied mosaic of wildlife and landscape.

That's the kind of hunt I like, no guns, no dogs. It saves nature diversity and no one is hurt.

It was me, chm, above. Went too fast as usual. Sorry

Tim: if only they will agree to the reforms of the CAP in 2013 so that High Nature Value farming is rewarded...

CHM: I think most of the hunters enjoyed it just as much too.

Nice post at a time when the Chinese are celebrating their New Year which just happens to be "Year of the Rabbit".

Callie and I will see a hare or two from time to time on our morning walks. I definitely see evidence of them after a snowfall. They are still hunted (as far as I know) in the vineyards around us.

I am concerned about the welfare issues of this hare translocation.

First, since it took place at the end of January it is likely some of the hares had dependent young which were left to die of starvation. Hare pregnancies from every month of the year are now in fact on record.

Secondly, owing to the trauma of being caught, it is likely some of the hares will suffer and die later from a condition known as stress myopathy which can be manifest as heart failure or stress enteritis even several weeks after the event.

Thirdly, from birth, hares build up an intimate knowledge of their habitat which enables them to find food and avoid predators. Moving them compromises their ability to survive and may cause them suffering.

The Hare Preservation Trust favours habitat management to benefit hares to encourage natural migration over time from areas where they are abundant to areas where they are scarce. For example, over-wintered cereal stubbles provide food from sprouting spilled grain and fresh weed growth.

Rodney: Many thanks for taking the time to give such a detailed and knowledgeable comment. I will add a postscript to the blog post so readers in the future pick up your info.