The past few days have been lovely, with properly warm sunshine arriving by lunchtime even when the day starts foggy or frosty.

This means some of the spring emerging insects are making an early move. Some of them will benefit from being able to forage a bit to tide them over until the reliably warm weather. Mostly these are species that overwinter as adults and can simply tuck themselves away in a protected spot for a few more weeks of dormancy when the chill returns.

We've seen Brimstone Gonepteryx rhamni (le Citron) butterflies out and about. They hunker down hidden in thick ivy or bramble to survive the winter, but can often be seen flying as early as February. They 'hatch' in summer and can live as long as 11 months, hibernating through the winter and emerging to start the new generation the following spring. Here, with our chalky soil, the caterpillars eat Common Buckthorn Rhamnus cathartica (or le Nerprun purgatif in French).

A Brimstone soaking up some rays. 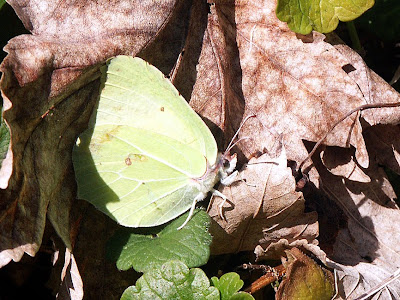 Also out and about are Marmalade Hoverflies Episyrphus balteatus (les syrphes ceinturés). This extremely common hoverfly can be seen in any month, although if it is cold its ability to fly is compromised. It can overwinter either as an adult or as a larva. I think this one has spent the winter as a larva and is newly 'hatched', judging by how dark its colouration was (darker than it appears in the photo). Many hoverflies are affected by the temperature during pupation in this way, being dark in cold weather and brightly coloured if they've developed in the warm summer temperatures. 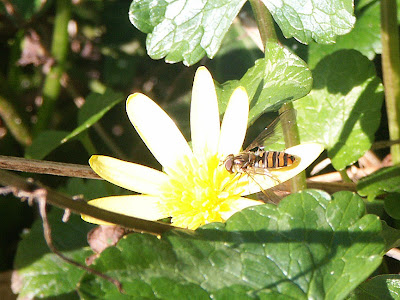 Do you get punaises/stinkbugs in your house this time of year. We are finding 2 or 3 of them every day. They buzz around lazily and that drives the dog crazy. I understand that they overwinter and come out of their "hibernation" at the earliest opportunity. They can get into the house through the narrowest, tiniest hole or crack (we suspect weep holes in the window frames). The punaises smell really bad to my nose.

Interesting, I have not seen a butterfly since I left France in mid October!!! Diane

Susan, I followed the link for carpenter Bees - what great pictures. I really enjoyed them. We have Carpenters in AZ and CA and I agree, they are pretty gentle. Pigface? they need to renmae that flower. :-)

Ken: these sound like Pine Bugs, a North American import. They commonly overwinter in houses both here and in NA. We've had a few. I always think punaises smell like coriander, and I was once told that the Vietnamese word for coriander translates as 'squashed stink bug'.

Diane: We can have butterflies on the wing in any month here, on sunny days.

Diogenes: The only insects you have to be careful of are the social ones - honey bees, yellow and black wasps, ants. It's very rare for anything else to sting. And I've no idea why it's called pigface.

Susan, that makes me wonder if these punaises are living in the two big cedar trees we have at the NW corner of the house.

Are you watching the show featuring the Brenne on France 3 this evening?

Ken: could be - I don't know what range of conifers they are actually associated with. They eat the seeds.

We don't have TV, but thanks for alerting me - I'll see if I can access it some other way.